Justices lean toward including citizenship question in next census 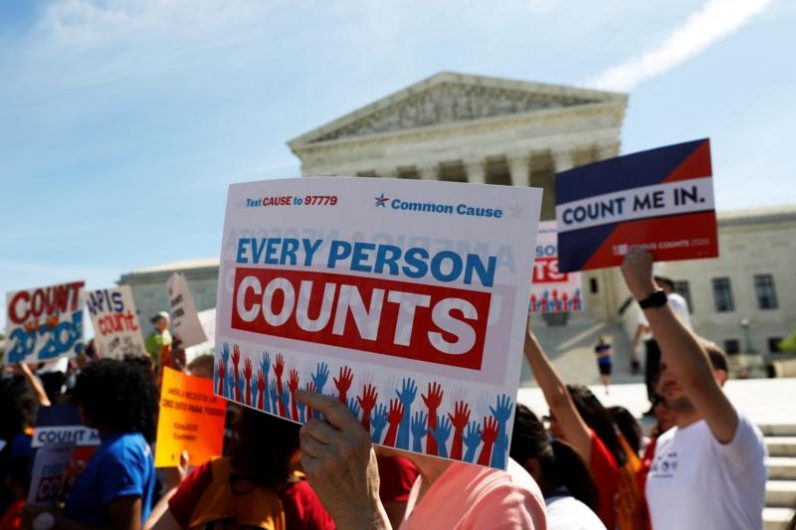 Demonstrators gather outside the U.S. Supreme Court in Washington April 23, 2019, following oral arguments on a citizenship question for the census. During oral arguments, a majority of justices seemed in favor of adding the question to the 2020 census. (CNS photo/Shannon Stapleton, Reuters)

WASHINGTON (CNS) — During April 23 oral arguments before the Supreme Court, the majority of justices seemed in favor of an added question about U.S. citizenship on the 2020 census questionnaire.

During more than one hour of discussion, the justices were unable to hear the crowds, primarily members of immigrant advocacy groups, assembled on the court’s steps during the warm, sunny morning stressing that the census needed an accurate count and that many people would not fill out the form with the added question.

The crowd held aloft placards saying: “Count me in,” “I count,” and “America needs a fair and accurate census.”

Justice Sonia Sotomayor echoed the concerns these groups raised, saying: “There’s no doubt people will respond less” to the census questionnaire with a citizenship question, a point which she said “has been proven in study after study.”

Both Chief Justice John Roberts and Justice Samuel Alito said the decision by Commerce Secretary Wilbur Ross to add a citizenship question — for the first time since 1950 to improve compliance with the Voting Rights Act — seemed reasonable. But Justice Elena Kagan said Ross’ reason for adding this question seemed “contrived.”

In defense of the added question, U.S. Solicitor General Noel Francisco said the information it would provide would help enforce the Voting Rights Act. When asked about the question leading to potentially less participation, he said: “There is always going to be a trade-off.”

Lawyers for New York, immigrant advocacy groups and the House of Representatives stressed that the added question would prevent noncitizens from filling out the census and have a negative financial and political impact on communities with large immigrant populations.

A similar argument was raised in a friend-of-the -court brief opposed to the citizenship question filed by Catholic Charities of the Archdiocese of New York and Catholic Charities of Brooklyn and Queens in New York. It said the added question would cause a “net differential undercount of people who live in noncitizen and Hispanic households” and would result in a “drastic and unwarranted reduction in funding in states and cities with large populations of such persons” and also would impact social service agencies.

Bishop Vasquez said all people should be counted in the census, regardless of their citizenship, but he noted that “proposed questions regarding immigration status will obstruct accurate census estimates and ultimately harm immigrant families and the communities they live in.”

Religious organizations and civil rights groups have been vocal in their opposition to a citizenship question.

The Leadership Conference on Civil and Human Rights, in a letter to the commerce secretary earlier this year, called the question “unnecessarily intrusive” and said it could “jeopardize the accuracy of the entire count, leaving public, private, and nonprofit decision-makers with bad information for all purposes, for the next 10 years.”

The letter included Catholic signers: the Franciscan Action Network, the Catholic social justice lobby Network and the National Advocacy Center for the Sisters of the Good Shepherd.

The group joined other critics of the citizenship question who have said it will undermine the form’s accuracy because legal and unauthorized immigrants might refuse to fill it out. By one government estimate, about 6.5 million people might decide not to participate in the census.

A decision in this case is expected in June.

PREVIOUS: Man faces charges for trying to walk into cathedral with flammables