Cardinal DiNardo calls bishops to be trustworthy like Barnabas 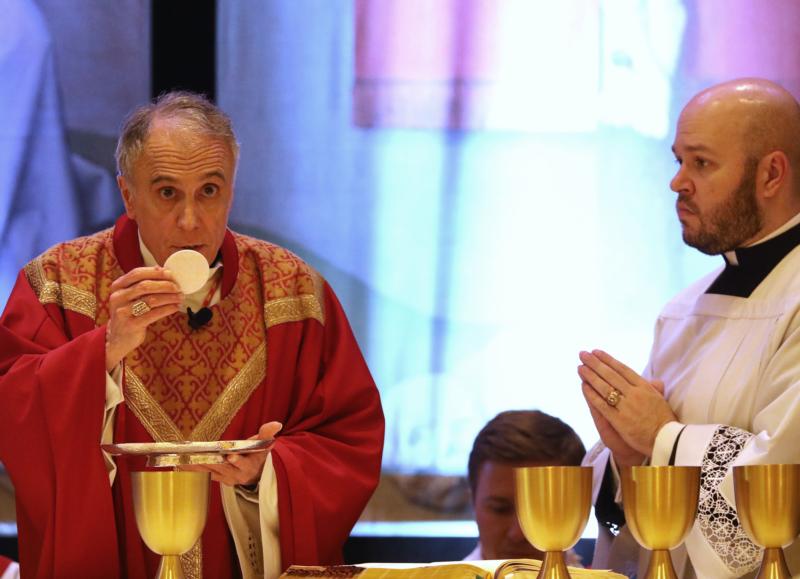 Cardinal Daniel N. DiNardo of Galveston-Houston, president of the U.S. Conference of Catholic Bishops, concelebrates Mass at the spring general assembly of the USCCB in Baltimore June 11, 2019. (CNS photo/Bob Roller)

BALTIMORE (CNS) — Cardinal Daniel N. DiNardo focused on the feast of St. Barnabas in his homily June 11 during a Mass at the end of the first day of the U.S. Conference of Catholic Bishops’ spring meeting.

The archbishop of Galveston-Houston and president of the USCCB, Cardinal DiNardo noted that the Acts of the Apostles tells about the life of the first Christian community, in which early followers witnessed to the Resurrection and shared their gifts in common.

“The church lives in glorious beauty and freedom for one chapter — until they start fighting in chapter six over the distribution” of the goods in the community.

He said that Barnabas and Paul were often linked in Scripture because Barnabas first introduced Paul to the Apostles. “The newly converted Paul is coming to Jerusalem, but the disciples are afraid of Paul. They stand aside. Who’s the one person who goes and gets Paul? It’s Barnabas.”

Later, the pair come down Jerusalem for the Council of Jerusalem, where the community wants Barnabas. “They listen to Paul, but it’s Barnabas they trust,” the cardinal said.

As Paul increases in prominence in the life of the early church, Barnabas becomes a kind of footnote of history. “We still remember him,” Cardinal DiNardo said. “That’s something to keep in mind this week” as the bishops discussed ministries and the urgent action they must take regarding episcopal accountability in the abuse crisis.

“I know in my local church, there are many people who want to be Pauls. And every now and then, I really appreciate someone who just wants to be a Barnabas. And maybe you’ve discovered that, too,” the cardinal told the nearly 300 bishops gathered for the meeting.

“Today we honor Barnabas in our desire to do God’s will and to do it carefully and with discretion but also with what the Holy Father calls boldness — apostolic boldness,” he said.

The Holy Spirit is anointing the bishops’ flocks. “He has appointed us. Ours is hard work to do this week. He anoints our people to be witnesses to Jesus Christ like Barnabas,” who believed in his resurrection and shared his gifts with the poor. “That became almost a recipe, and for it, he was trusted. That’s my son of consolation. May we be sons of consolation, too,” Cardinal DiNardo said.

PREVIOUS: AMA applauded for reaffirming its opposition to doctor-assisted suicide