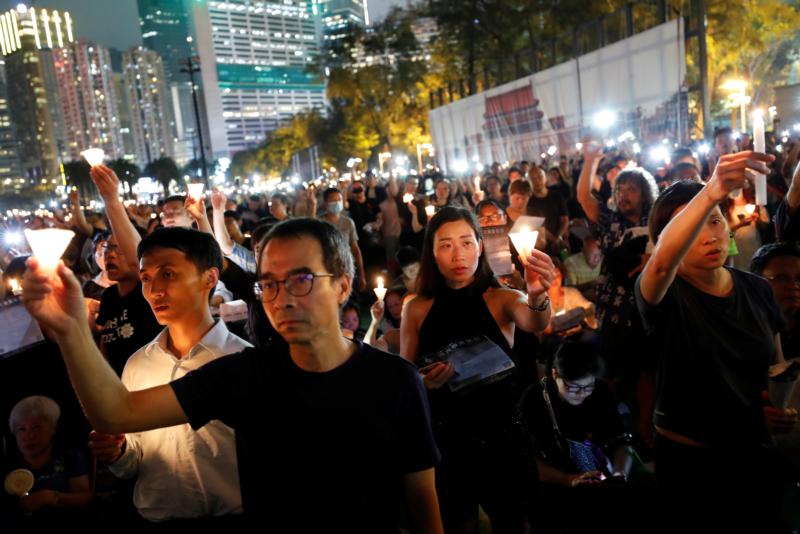 Thousands of people take part in a candlelight vigil at Victoria Park in Hong Kong June 4, 2019, to mark the 30th anniversary of the crackdown on a pro-democracy movement at Beijing’s Tiananmen Square in 1989. (CNS photo/Tyrone Siu, Reuters)

HONG KONG (CNS) — Tens of thousands of people commemorated the 30th anniversary of the Tiananmen Square massacre at a candlelight vigil in Hong Kong’s Victoria Park.

The gathering June 4 attracted 180,000 people, according to the Hong Kong Alliance in Support of Patriotic Democratic Movements of China, the organizer of the event. It was largest gathering of people in Hong Kong since the 2014 sit-in street protests known as the Umbrella Revolution, ucanews.com reported.

As a special administrative region, Hong Kong is the only place in China were the massacre can be commemorated.

People filled the park plus neighboring roads to remember the bloody crackdown against the pro-democracy student-led movement in Beijing’s Tiananmen Square June 4, 1989.

The number of people killed has been estimated to be in the hundreds or thousands. British files declassified in 2017 said a Chinese official told the United Kingdom ambassador to China at the time that at least 10,000 people had been killed.

Prior to the candlelight vigil, more than 1,000 Catholics joined a prayer service at the park during which Auxiliary Bishop Joseph Ha Chi-shing of Hong Kong reflected on the importance of why such terrible events should be commemorated.

“I found that the Beijing students 30 years ago showed us the beauty of humanity in their lives. They believed there is light in the darkness, hope in the hopeless. They believed nonviolence will overcome violence,” Bishop Ha said.

The bishop also reminded the faithful that Hong Kong is at a critical moment regarding a controversial extradition law amendment.

Another speaker at the prayer service, Jacky Liu, who was born in 1989, said he was enlightened about the massacre 10 years ago when he was a university student.

“When I watched a video about June 4, I was moved by those people in Beijing who rescued the victims. It was just like how Christ shows his mercy,” said Liu, a former Catholic student movement leader.

“We can follow the footsteps of the Beijing students and become witnesses, prophets,” Cardinal Zen said before the blessing.

For Gabriel Miu, 16, it was the second time he had joined the June 4 prayer service and candlelight vigil.

“I join these events because the Chinese Communist Party has to take responsibility for the massacre,” Miu said. “Also, we have been facing CCP oppression in Hong Kong in recent years. By attending, I am opposing this.”

Lina Chan, secretary of the Justice and Peace Commission of the Hong Kong Diocese, believed many people joined the event because of concern about Hong Kong’s political situation, especially in relation to the extradition law amendment.

“The extradition law amendment makes us worry that the ‘one country, two systems’ will collapse,” Chan told ucanews.com.

The Hong Kong government has proposed an amendment to the extradition ordinance that would allow the government to send fugitives to China and Taiwan to be tried on a case-by-case basis. If it is passed, any fugitive from the law who sets foot in Hong Kong could be tried and imprisoned on the mainland if a request is made and Hong Kong consents.

NEXT: Despite 2018 Vatican-China agreement, repression of Catholics remains