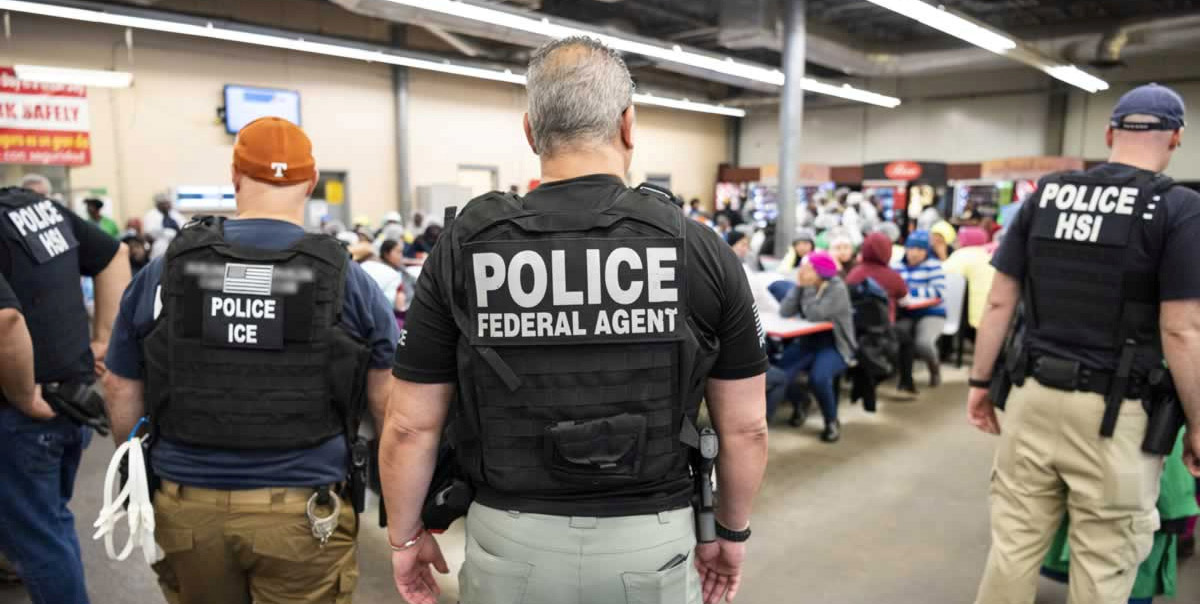 U.S. Immigration and Customs Enforcement officers look on after executing search warrants and making arrests Aug. 7, 2019, at an agricultural processing facility in Canton, Miss. Mississippi’s Catholic bishops joined with the state’s Episcopal, Methodist and Lutheran bishops in condemning the Trump administration’s ICE raid on seven food processing plants in the state to round up workers in the country illegally. (CNS photo/Immigration and Customs Enforcement handout via Reuters)

JACKSON, Miss. (CNS) — Mississippi’s Catholic bishops joined with the state’s Episcopal, Methodist and Lutheran bishops in condemning the Trump administration’s Aug. 7 raid on seven food processing plants in the state to round up workers in the country illegally.

Such raids “only serve to … cause the unacceptable suffering of thousands of children and their parents, and create widespread panic in our communities,” the religious leaders said in an Aug. 9 statement quoting Cardinal Daniel N. DiNardo of Galveston-Houston, president of the U.S. Conference of Catholic Bishops, from a July letter he sent to President Donald Trump.

“We, the undersigned, condemn such an approach, which, as he (Cardinal DiNardo) rightly states, ‘has created a climate of fear in our parishes and communities across the United States,'” they said.

In what is the biggest sweep in a decade, ICE arrested and detained nearly 680 people. About 300 were released that evening; another 380 people remained in custody.

“These are not new laws, nor is the enforcement of them new,” ICE’s acting director, Matt Albence, said in a statement Aug. 7. “The arrests today were the result of a yearlong criminal investigation. And the arrests and warrants that were executed today are just another step in that investigation.”

He said the employers could be charged with knowingly hiring workers who are in the county illegally and will be probed for tax, document and wage fraud, Albence said.

Investigators told The New York Post daily newspaper that six of the seven processing plants were “willfully and unlawfully employing illegal aliens”; many of the workers used false names and had fake Social Security numbers, according to the newspaper.

On NBC’s “Meet the Press” Aug. 11, Albence acknowledged the timing of the sweep “was unfortunate,” coming just days after the mass shooting in El Paso, Texas, where the alleged shooter said he was targeting Hispanics.

In their joint statement, the Mississippi bishops wrote: “To say that immigration reform is a contentious and complex topic would be an understatement.”

“As Christians, within any disagreement we should all be held together by our baptismal promises. Our baptism, regardless of denomination calls us to unity in Jesus Christ,” they said. “We are his body and, therefore, called to act in love as a unified community for our churches and for the common good of our local communities and nation.”

They also said their churches stand ready to assist immigrants with their immediate needs following the ICE raid.

“We can stand in solidarity to provide solace, material assistance, and strength for the separated and traumatized children, parents and families,” the bishops said. “Of course, we are committed to a just and compassionate reform to our nation’s immigration system, but there is an urgent and critical need at this time to avoid a worsening crisis.”

Catholic Charities in the Diocese of Jackson was directly assisting families and also was accepting donations for its outreach at https://catholiccharitiesjackson.org.

In other reaction to the ICE sweep in Mississippi, Lawrence E. Couch, director of the National Advocacy Center of the Sisters of the Good Shepherd, called the enforcement actions “outrageous” and “out of order in this land of freedom and welcome.”

He called on the Trump administration to release all the workers.

He called the ICE raid “part of a malicious campaign to paint immigrants as criminals and rapists who have ‘invaded’ our country.”

The workers who were arrest “had no criminal record,” he said. “Many have lived and worked in the United States for several years. This action has created a catastrophe for the families and is spreading fear throughout the immigrant community. Children were left homeless and traumatized by having their parents torn from them. It is unknown if some children remain alone.”

Instead of arresting “these hardworking people (who) have lived and worked in our country for many years, raised their families, and contributed their talents and resources to our communities,” Couch added, they should be given a path to citizenship.

Other Catholic agencies offering help to the families in need in Mississippi after the arrest of their breadwinner include Chicago-based Catholic Extension, which announced Aug. 8 it would send help immediately but also would begin fundraising through its “Holy Family Fund.”

Catholic Extension is the leading national supporter of missionary work in poor and remote parts of the United States. The Jackson Diocese, one of the poorest in the country, has long been supported by the organization, including some of it parishes in towns where the raids took place.

PREVIOUS: Those on path to legal immigration who use public funds face a roadblock

NEXT: Opinion on abortion’s legality unchanged; some shifting within groups