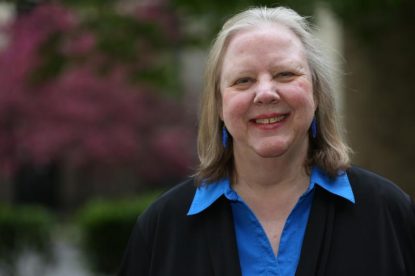 Paula Kaempffer will help bring about healing from clergy sexual abuse as she serves the Archdiocese of St. Paul and Minneapolis in her new role as outreach coordinator for restorative justice and abuse prevention. She is pictured in a May 22, 2019, photo. (CNS photo/Dave Hrbacek, Catholic Spirit)

ST. PAUL, Minn. (CNS) — Paula Kaempffer, a survivor of clergy sexual abuse she suffered as an adult working in the church, knows firsthand about the kind of healing that can take place.

And as the new outreach coordinator for restorative justice and abuse prevention for the Archdiocese of St. Paul and Minneapolis, she said healing “takes a lot of personal work” and “a lot of inner strength to recapture the power that has been taken away from you.”

She said she is grateful that she has done that work and “come out on the other side.”

Now she intends to help other victims/survivors and others across the archdiocese seek ways to move from anger and other difficult emotions into healing.

“I think most parishes have not had an opportunity to talk about this issue,” she said.

Kaempffer’s office also is offering a listening ear and resources to help people who might face a variety of challenges, including the emotions of a property crime or homicide, said Janell Rasmussen, deputy director of Ministerial Standards and Safe Environment, the archdiocesan office that oversees its child protection efforts.

“Her outreach will be much broader than sexual abuse,” Rasmussen said.

Kaempffer said her faith was an integral part of her own healing.

“I was blessed in that I never blamed God for it,” Kaempffer said of the abuse she suffered. “God didn’t do this to me. People made bad choices. But I do get when people blame God,” she told The Catholic Spirit, archdiocesan newspaper of St. Paul and Minneapolis.

Kaempffer said she contacted Tim O’Malley, director of the Ministerial Standards and Safe Environment office, five years ago, saying she wanted to help the archdiocese in whatever way she could. They began consulting on a regular basis, and when O’Malley and Rasmussen asked her to take the new position, she accepted.

After spending the past 12 years as director of learning at the Basilica of St. Mary in Minneapolis, she said she misses her colleagues at the basilica, where she helped lead the Rite of Christian Initiation of Adults, Bible study and other adult faith formation activities.

O’Malley said he is pleased to have Kaempffer join the archdiocese’s efforts at healing, pointing out that she has the “experience, skill set, perspective and confidence to assist a wide variety of people.”

Kaempffer has taken part in the archdiocesan restorative justice efforts led in part by Janine Geske, a former Wisconsin Supreme Court justice and retired law professor. The sessions she attended included healing circles of prayer and sharing. “I’m quite inspired by the concept and how it works,” she said, noting the emphasis is on recognizing the harm first in order to heal it.

She said she plans to develop and publicize a variety of healing events, presentations on restorative justice, listening sessions and other opportunities in the archdiocese to be listed on the archdiocesan website at: safe-environment.archspm.org.

Getting people to understand and express their needs can take time, Kaempffer said, and she is willing to meet with people wherever they are comfortable.

She also said there are a variety of resources, including referrals for professional counseling and pastoral assistance, that may be beneficial to some survivors.

Listening carefully to discern people’s needs and suggesting programs that might help them will be critically important aspects of her job, Kaempffer said.

“We need to let them take the lead,” she said of victims/survivors. “They may not know what they need. But they will know it when they see it.”