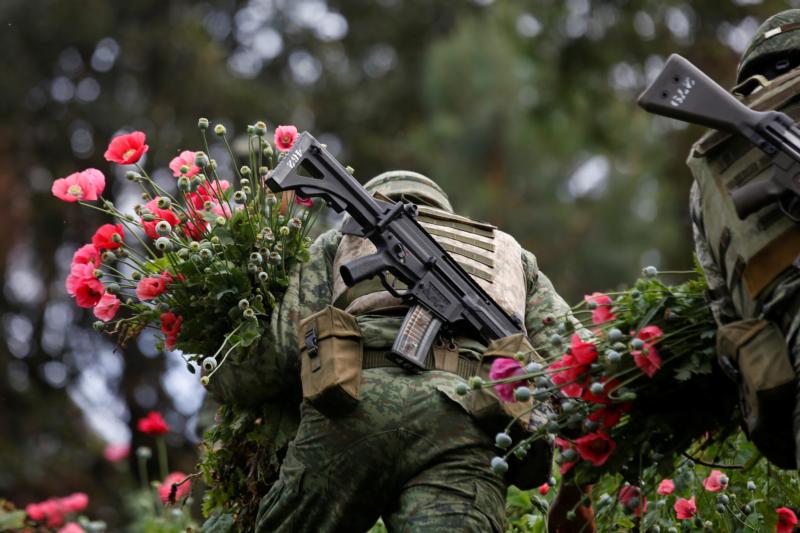 MEXICO CITY (CNS) — A bishop in Mexico’s heroin-producing heartland is urging the federal government to hold talks with armed groups — including drug cartels — saying many in the illegal drugs business are unable to make ends meet and are “seeking an exit.”

Mexican Interior Minister Olga Sanchez Cordero said Aug. 20 that talks were occurring with armed groups, but later clarified to say that they didn’t included drug cartels and rather were with so-called community police and self-defense groups, the Associated Press reported.

Such self-defense groups ostensibly form to provide security in lawless regions but are sometimes co-opted by drug cartels or stray into illegal activities.

The Interior Ministry later wrote via Twitter that Sanchez Cordero “expressed a willingness to speak with authentic self-defense organizations to achieve the pacification of some parts of the country … the disarming of these organizations and those involved in them. … the federal government doesn’t have nor will it have dialogue with any criminal organizations.”

But Bishop Salvador Rangel Mendoza of Chilpancingo-Chilapa told Catholic News Service that the government should “reach out” to both self-defense and criminal groups in his diocese in Guerrero state, saying leaders were ready to talk.

“If the government wants to dialogue with these criminal groups and, above all, wants to talk with these community police forces, I think that’s good,” Bishop Rangel said.

“To get peace you have to dialogue, even with Satan, with whomever it might be to get peace,” the bishop said. “But they have this point of view that we don’t want to talk because they break the law. At least you have to listen to them.”

Bishop Rangel has sought drug cartel bosses for talks in one of Mexico’s most marginalized and violent states, Guerrero, which unfolds to the south of Mexico City and includes the glitz of Acapulco and the misery of impoverished indigenous villages, where people plant opium poppies to survive.

But Bishop Rangel said the illegal economy of planting opium poppies and processing heroin has collapsed because of the rise of synthetic fentanyl, which is sold more cheaply. It has left communities in his diocese devastated and suffering hunger, he said, as people struggle to plant alternative crops such as corn after a lifetime of “getting easy money from drugs.”

With the crash in heroin prices, some of the drug cartel leaders, Bishop Rangel said, “no longer want to fight because it doesn’t make sense. What are they fighting over? … Now, nothing.”

He added, “drugs are no longer being moved” in the region he serves.

Talk of dialogue comes as Mexico’s murder rate reached a record high in the first half of 2019.

An undersecretary in the interior ministry recently met with self-defense groups in several states, showing possible divisions in the federal government over its security strategy.

Mexican President Andres Manuel Lopez Obrador floated the idea in 2018 of offering an amnesty to Mexicans in the illegal drugs business, but he said Aug. 21 that he opposes dialogue with criminal groups.

“There won’t be dialogue with members of organized crime groups, as they’re called. We don’t have that relationship,” he said.

“The first thing to do is attend to the causes that originate insecurity, violence. That’s what we’re doing, rescuing the countryside so there’s work, so that young people are attended to.”

NEXT: Lofty titles do not guarantee entrance to heaven, pope says