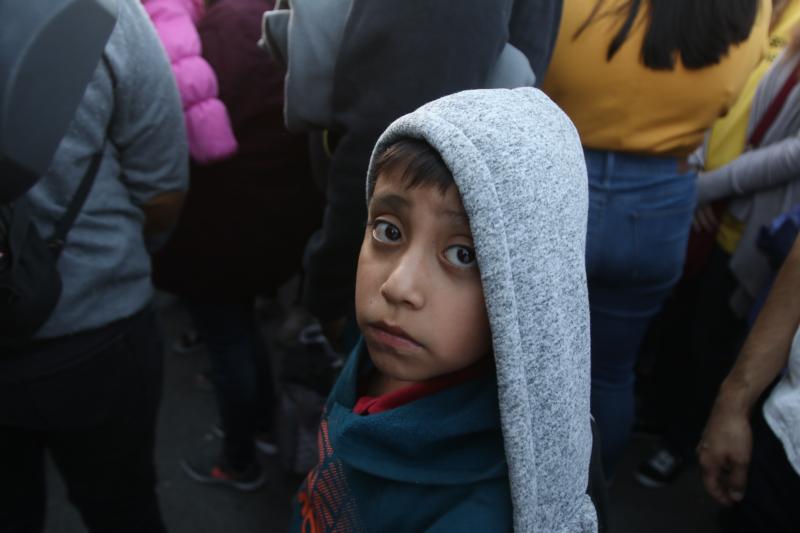 A boy is seen as others pray in Juarez, Mexico, before crossing the Lerdo International Bridge into El Paso, Texas, Oct. 12, 2019. The bridge crossing was a binational public action that was part of an Oct. 11-13 pilgrimage and teach-in held in El Paso, Texas, sponsored by the Latinx Catholic Leadership Coalition, in collaboration with Hope Border Institute. (CNS photo/Jesus Rosales)

The gathering, attended by about 300 people, was sponsored by a newly formed group called Latinx Catholic Leadership Coalition in collaboration with the Hope Border Institute. Organizers said the event was in response to “inhumane treatment of migrants and refugees at the border” and the El Paso shooting that authorities believe targeted Latinos this past summer.

The event included workshops, trainings, strategizing sessions and a public action where participants walked across the Lerdo International Bridge from El Paso to Ciudad Juarez, Mexico, to visit asylum-seekers Oct. 12.

The opening session Oct. 11 had as its theme: “Our communities are under attack: undermining white supremacy through solidarity” and had as its presenter Msgr. Arturo Banuelas, pastor of St. Mark’s Church in El Paso.

The closing session Oct. 13 was about Latino leadership for the present moment led by Luis Fraga, director of the Institute for Latino Studies at the University of Notre Dame.

At the end of the three-day gathering, Bishop Mark J. Seitz of El Paso released a pastoral letter titled “Night Will Be No More” and signed copies of the letter for some of those attending the border event.

The pastoral letter spoke about the church’s role in racism at the border, particularly among indigenous communities and also described the pain of Latinos in the El Paso area following the mass shooting at the Walmart in August.

The bishop said the shooting, which killed 22 people, was an example of the racism toward Latinos that has reached “a dangerous fever pitch” in the nation

At the end of the letter, Bishop Seitz urged President Donald Trump, Congress and the Supreme Court to “listen to the voice of conscience and halt the deportation of all those who are not a danger to our communities, to stop the separation of families, and to end once and for all the turning back of refugees and death at the border.”