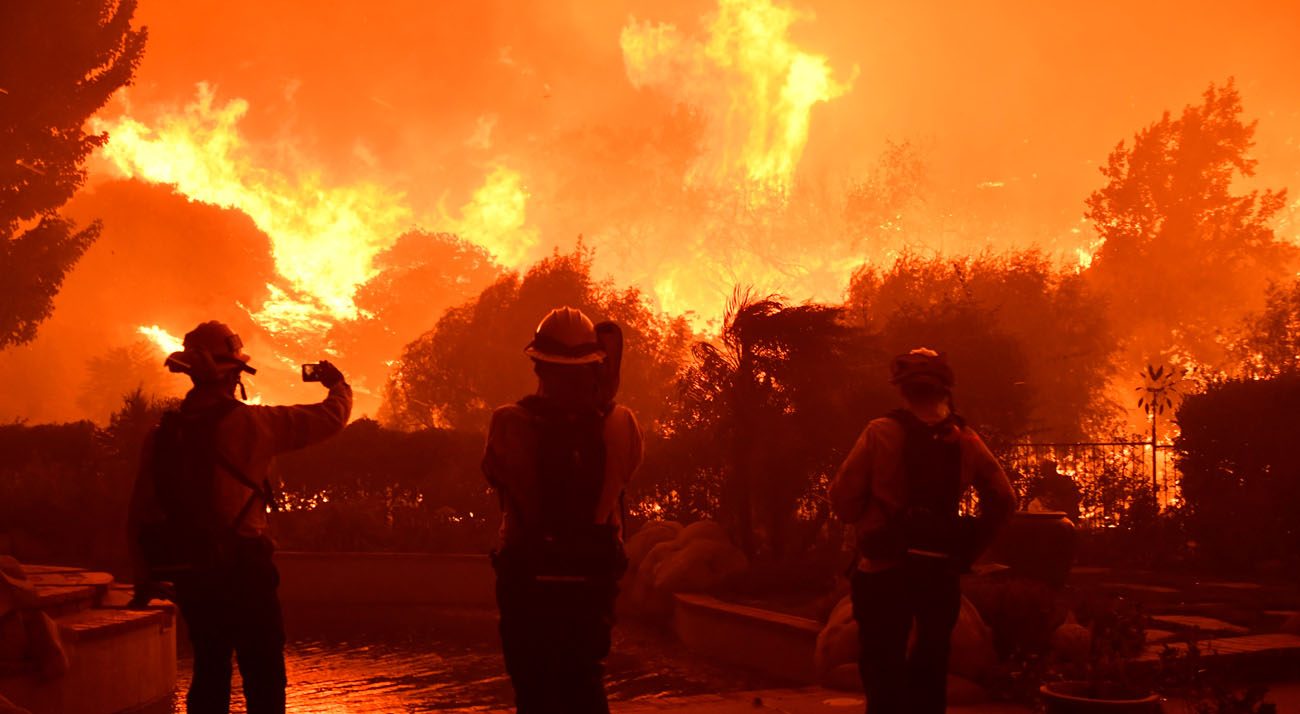 Firefighters look on as a wind-driven wildfire burns Oct. 11, 2019, in Porter Ranch, Calif. The Archdiocese of Los Angeles is providing support to the communities affected by the fires through Catholic Charities of Los Angeles and local parishes and schools. (CNS photo/Gene Blevins, Reuters)

LOS ANGELES (CNS) — The Archdiocese of Los Angeles is expanding a fund established last year for victims of wildfires in California to victims of the current wildfires burning in Los Angeles and Ventura counties.

The fund was created in the wake of the Thomas Fire that struck Ventura and Santa Barbara counties in 2017-18, killing two people directly and another 21 indirectly from debris and mudflows, scorching more than 280,000 acres.

The Saddleridge Fire, which started Oct. 10 in the Los Angeles suburb of Sylmar, has claimed two lives, both from heart attacks. It has burned 8,400 acres in the hills of the San Fernando Valley, destroying 17 structures and damaging another 77.

The archdiocese is providing support to communities affected by the fires through its local parishes and schools. Those in need of immediate temporary shelter, food or assistance can contact the pastor of their nearest parish for help.

“Please join me in praying for our brothers and sisters caught in the Saddleridge fires and fires throughout Southern California,” said Los Angeles Archbishop Jose H. Gomez in an Oct. 11 statement.

“We pray for the families who have lost their homes and those who have been evacuated, and all those who are still in danger. We pray especially for firefighters, police and others working to keep people safe and put these fires out. May our Blessed Mary be close to all of them,” he said.

“We are not asking folks for donations right now,” said Adrian Alarcon, a spokeswoman for the archdiocese. “There are quite a few fires in California,” she added. Some of the most devastating wildfires last year struck the northern part of the state in November, including one blaze that took 85 lives. The Thomas Fire started in December 2017 and burned for more than one month.

While no cause has been established, power lines are suspected to have been involved in the Saddleridge fire, which led to evacuation orders for 100,000 people, authorities said Oct. 14.

According to the Los Angeles Fire Department, the Saddleridge Fire ignited in a 50- by 70-foot area beneath a high-voltage transmission tower. Other parts of Southern California were under rolling power blackouts at the time to prevent fires sparked by power lines.

NEXT: Catholics among those arrested at protest over low refugee cap