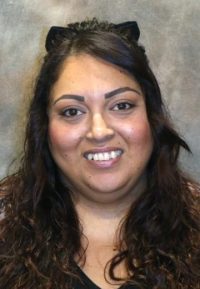 Ana Chavarin, a member of St. John the Evangelist Parish in Tucson, Ariz., and an organizer for Pima County Interfaith Civic Education, is the winner of the 2019 Cardinal Bernardin New Leadership Award from the U.S. bishops’ Catholic Campaign for Human Development. (CNS photo/courtesy Diocese of Tucson)

WASHINGTON (CNS) — Ana Chavarin knows what it’s like to be cheated and dismissed as an immigrant without legal status in this country.

It happened repeatedly after she and her then-husband and three young children relocated to Tucson, Arizona, in 2003 from the border town of Agua Prieta, Mexico, for work.

Chavarin, now a legal permanent resident, recalled how an employer failed to pay her for all the hours she worked cleaning rooms at one of Tucson’s top-end hotels. The boss threatened to report her to immigration officials if she complained too much.

It happened to her husband in his job, too.

At home, when she asked the landlord to fix a leaky faucet, her request was ignored.

Such situations were frustrating, Chavarin said, because being stifled from addressing injustice was not something to which she was accustomed.

“My whole life I have been very outspoken,” she told Catholic News Service. “Coming to America and finding a situation in which I cannot speak when a neighbor is mistreating me or the landlord cannot fix a faucet or an employer is cheating me, it’s a sense of powerlessness to not be able to defend yourself. It’s a fear that that person will call Border Patrol and you lose the little that you achieved in this country.”

Those days are over for Chavarin, 37, who is on track to become a U.S. citizen in a couple of years.

Today she works as a community organizer with Pima County Interfaith Civic Education Organization, known as PCIC and funded by the Catholic Campaign for Human Development, the domestic anti-poverty program of the U.S. Conference of Catholic Bishops.

Since 2014, Chavarin has used her experiences to empower other immigrants and low-income families whose rights are being trampled. She convenes meetings at homes, parishes and churches to hear concerns and help people develop their responses.

Her achievements have been noticed. She has been named CCHD’s 2019 Cardinal Bernardin New Leadership Award. She will receive the award during the bishops’ fall general assembly in Baltimore.

Chavarin, a member of St. John the Evangelist Parish in Tucson, said she was surprised to win the award. “When I saw that, I said, ‘What,'” she told CNS.

Throughout Pima County, Chavarin has established herself as a leading voice on the rights of immigrants, said Franciscan Sister Leonette Kochan, who nominated her for the CCHD award.

“She is determined to give back. That is the focus of her life,” said Sister Kochan, who worked with Chavarin as director of the Office of Human Life and Dignity in the Diocese of Tucson for five years. Sister Kochan was elected in June to the leadership team of her order, the Franciscan Sisters of Christian Charity in Manitowoc, Wisconsin, and left Arizona.

Chavarin’s life has been challenging in other ways beyond her status as an immigrant. She was sexually assaulted and, in the aftermath, her husband sought a divorce. That left Chavarin to raise by that time four children as a single mother while working at a low-wage job cleaning offices and attending classes to obtain a GED certificate.

It was a difficult time, Chavarin recalled to CNS. She prayed that God would send her a better paying job so she could support her family and use her skills as a community leader. Her answer came in a call from PCIC’s lead organizer, who offered a her part-time work. The position eventually became full time. To keep rooted in the daily experiences of PCIC members, Chavarin continues to clean offices at night for 20 hours a week.

Chavarin has completed work on an associate degree in psychology from Pima Community College and plans to enroll at the University of Arizona to continue working on a bachelor’s degree.

Sister Kochan’s nomination form listed Chavarin’s achievements, including: leadership in regional and national events tied to the V Encuentro; leadership in the Dioceses Without Borders initiative of the dioceses of Tucson and Nogales, Mexico; helping coordinate the Pima County Public Policy Initiative to bring clergy and lay leaders together to develop a voice in civic affairs; training Hispanic leaders in the Tucson Diocese under the CCHD grant; and creating stronger ties between Tucson police and the city’s residents.

She also helped guide a campaign that resulted in the City Council passing a law prohibiting the sale of synthetic marijuana. Such sales were centered in high-poverty areas of south Tucson, with some shops located near schools.

“Her faith is so basic to her life. And her determination,” Sister Kochan told CNS. “Because she is so faithful to her faith that carried her through her trauma, she is determined to give back. That is the focus of her life.”

Chavarin said she is driven by her Catholic faith to speak on behalf of others who are experiencing injustice. She credits both of her grandmothers for instilling a deep sense of God in her life. She also derives inspiration from the words of Pope Francis in his call to go to the margins of society to find Christ.