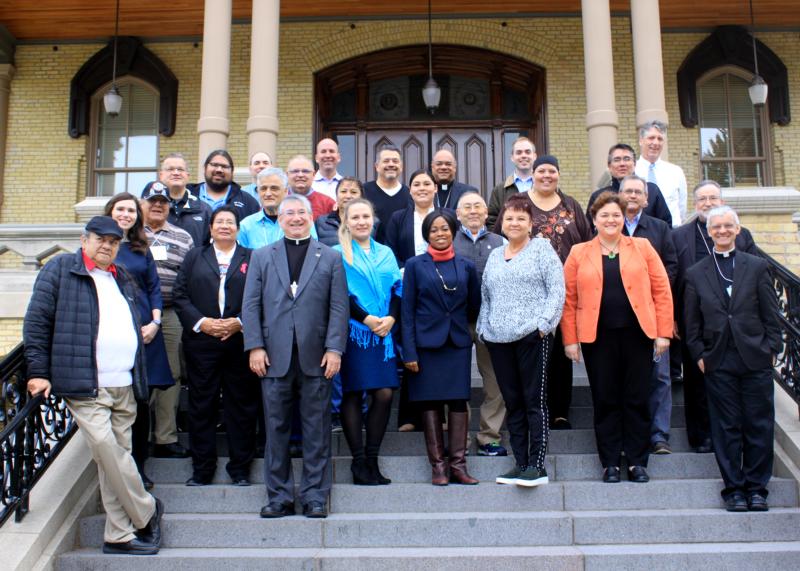 Attendees of a Native American anti-poverty summit pose for a photo Oct. 17, 2019, at the University of Notre Dame in Indiana, the site of their Oct. 15-17 gathering. (CNS photo/courtesy Father Michael Carson)

NOTRE DAME, Ind. (CNS) — An anti-poverty summit that took place at the University of Notre Dame Oct. 15-17 brought together American Indian tribal leaders from around the country to discuss poverty issues on their reservations, with a goal of formulating tribal/church strategies to address that poverty.

The U.S. Census Bureau reports approximately 3 million people whose primary race is Native American or Alaska Native. Of those, about 40 percent live on reservations or trust lands, and a high percentage fall well below the poverty level.

About 20 percent of Native Americans are Catholic, but proposals coming out of the gathering are expected to be applicable to all Native Americans, according to meeting organizer Father Michael Carson, assistant director of Native American affairs for the U.S. bishops’ Secretariat for Cultural Diversity in the Church. Father Carson, a priest of the Diocese of San Jose, California, is a Choctaw Indian.

Also attending were Bishop James A. Tamayo of Laredo, Texas, who is chairman of the bishops’ Committee on Hispanic Affairs and a member of the Subcommittee on the Catholic Home Missions; and Bishop Shelton J. Fabre of Houma-Thibodaux, Louisiana, chairman of the Subcommittee for African-American Catholics and a member of the bishops’ Committee on Cultural Diversity in the Church; and Bishop Jaime Soto of Sacramento, California, who is former chairman of the cultural diversity committee and serves on the board of the Catholic Legal Immigration Network, or CLINIC.

One common theme expressed by several of the Native Americans was that Indian tribes have a deep spirituality, a codified legal system, and strong devotion to family and community — values that are often not acknowledged by the wider population.

Darla Black of Pine Ridge, South Dakota, who is vice president of the Oglala Sioux Tribe, described what life is like on a reservation. She related conditions similar to those of a Third World country. Before these problems can be solved, she warned, there must be healing from the mistreatment that marks so much of the Native American experience.

Black did express hope for the future, as she related a resurgence of interest in traditional Indian customs and virtues among the young people in her tribe, who want to learn and embrace the historical Indian laws and values. Black also encouraged the Catholic bishops to support the Native American cause, saying the prelates are respected by legislators.

Charlotte Bad Cob of Wanblee, South Dakota, also an Oglala Sioux, said that in the past, decisions have been imposed on them from the outside, without consultation with the tribal members themselves. She declared that the wisdom, experience and talents of tribal members must contribute to finding real solutions to poverty and its related problems.

The 19th-century forced relocation of many tribes has caused a huge shrinkage of Native American lands, he related, and tribal members were not given rights as citizens until 1924. Even now, the overlap between the authority of tribal courts and state and federal courts, causes complex legal problems.

Further, he said that the U.S. Congress has not been “friendly” toward tribal sovereignty rights, but he was optimistic that higher courts are becoming better informed.

The summit created several action items that participants said should be developed and maintained to address poverty issues and tribal rights:

— On land and environment: tribal sovereignty over resources and land, access to clean water and protection of water resources, and housing loan programs.

— On sovereignty: education of the general population about tribal sovereignty issues, and economic growth initiatives.

— On education: recruitment and training of indigenous teachers, promotion of a rigorous academic curriculum that is culturally responsive, and replacement of deteriorating school facilities.

— On racism: address the problem of “economic racism” that is designed for native peoples to fail, acknowledge and address historical aspect of racism against them, and challenge negative stereotypes and destructive cultural appropriation as portrayed in the media.

Fern V. Orie of Lac du Flambeau, Wisconsin, a member of the Oneida Nation and CEO of the Wisconsin Native Loan Fund, said she hopes the anti-poverty summit will help religious organizations understand the historical origins of Indian poverty. Those origins are the traumas Native Americans have experienced and still experience, she said, and once that concept is grasped, healing can begin.

“The most targeted solutions will be found through listening to the people who have lived it, and have lived it through generations,” Orie told Today’s Catholic, newspaper of the Diocese of Fort Wayne-South Bend. “I hope we can all come to some common ground and find ways we can address poverty from every angle.”

The University of Notre Dame hosted the event through the American Indian Catholic Schools Network, a program of Notre Dame’s Alliance for Catholic Education, known as ACE. In that program, ACE works with several Indian Catholic schools to achieve common goals and share best practices for under-resourced schools.

NEXT: Once cheated, community leader now helps others speak with united voice