The dark side of memes: spreading untruths about religion 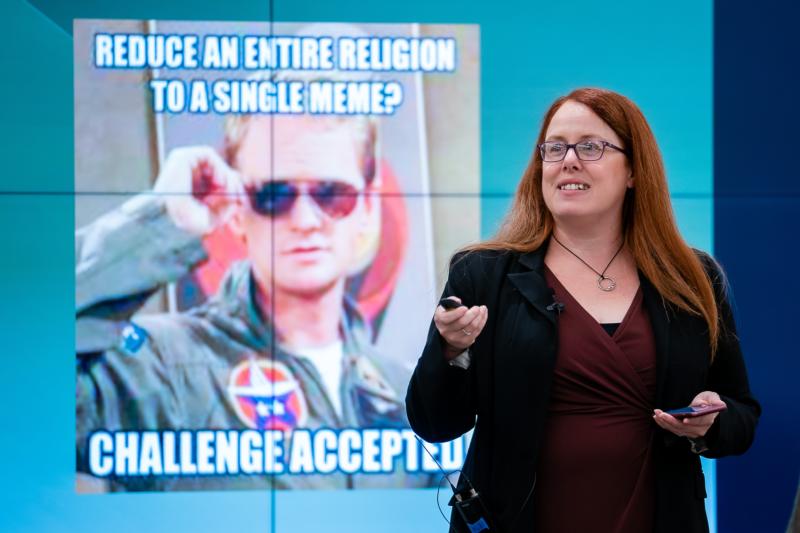 Heidi Campbell, a communications professor at Texas A&M University in College Station, speaks Oct. 18, 2019, during a conference titled “Religion Beyond Memes” at the University of Notre Dame’s Ansari Institute for Global Engagement in Washington. The daylong conference explored the role the images play in how some in society perceive religions and those who practice. (CNS Photo/Greg Gibson, University of Notre Dame Keough School of Global Affairs)

WASHINGTON (CNS) — The image seems inoffensive on the surface: a figure of a gray-haired man, presumably God, with text that says: “I gave you free will so use it exactly as I command you to.”

It was one example of an image known as a meme offered by Heidi Campbell, a communications professor at Texas A&M University, who studies how such images can affect widespread perceptions of religion and of members of religious groups.

Memes — pronounced “meems” — are rampant and hard to avoid by anyone who uses social media, and while most may chuckle at some of the images, some warn that they can be used to spread erroneous or even detrimental views about various faiths and their members.

Campbell was one of more than a dozen panelists who participated in Washington Oct. 18 in a conference titled “Religion Beyond Memes,” which explored the role the images play in how some in society perceive certain faiths and those who practice them. Professor Ebrahim Moosa, of the University of Notre Dame, reminded attendants that “memes can maim” and even become toxic, “discrediting an entire people.”

The conference, hosted by the University of Notre Dame’s Ansari Institute for Global Engagement with Religion, was the latest effort of an initiative seeking to foster better understanding of the world’s religions and one that began with an Indiana couple’s hopes.

The institute was founded in 2017 with a $15 million philanthropic gift by Rafat and Zoreen Ansari, two doctors who live near the Holy Cross Institution in South Bend, Indiana, and whose daughter attended Notre Dame. It is part of the university’s Keough School of Global Affairs.

The Ansaris were present for the daylong conference in Washington where journalists, teachers and scholars discussed misconceptions, the need for accuracy to combat the falsehoods that can travel via memes and what others can do to fight misinformation about religion.

Scholars such as Moosa discussed during the conference popular misconceptions that are propagated, often via memes. Some target madrasas, a type of school for religious instruction in the Islamic world — a madrasa “is not a place where terrorists are trained,” he said — and Shariah law, a set of values Muslims have developed over the centuries. Both are popular memes that seek to spread misconceptions and paint Islam as a religion to fear.

In the absence of authorities to enforce the truth online, it is up to others to educate the public because memes, though they may seem inoffensive, can drive falsehoods that others begin to believe and adopt.

“What this does is it destroys the truth,” Moosa said. “We should not take the meme at face value. The meme then substitutes the truth for its own version of what it thinks is the truth.”

A quick internet search also shows that the Catholic faith and its members are not exempt from the world of offensive memes. Some take the sex abuse scandal and paint all priests as abusers and Christians in general as judgmental, ignorant and hypocritical.

Memes can often paint just one side of the story, said Campbell. Some groups and individuals use memes to negatively paint faith as a system of control, not beliefs people freely choose. But it’s hardly a new development.

“One of the questions I often get asked is ‘isn’t the internet part of why religion is getting such a bad rap?’ I would argue that the internet doesn’t frame religion in a negative way,” said Campbell. “What it does is it magnifies and extends some popular discourse that has been going on (offline).”

Religion online is often based on stereotypes, she said, and sometimes that’s because nuance can’t be captured in the succinct methods used in online communication, including memes. However, there are positive ways some use to express their religious identity online, Campbell said, and some use digital spaces and resources to “create and perform” a religious identity.

“The internet provides them a way to experiment with what it means to be a Muslim, a Scientologist, a Christian in contemporary society. It becomes a space where they present an alternative identity,” she said.

For example, there’s a meme that uses the image of a man wearing a “taqiyah,” or a skullcap worn by some Muslims. It’s known as the “ordinary Muslim man” meme and it says “I am the bomb,” but below are the words “at making falafels,” Campbell said. It is a tongue-in-cheek effort to turn a stereotype on its head, but sometimes what’s humorous here in the U.S. is not humorous in other parts of the world, she said, and sometimes an attempt at correcting a stereotype can have the opposite effect.

The “buddy Christ” meme, from the movie “Dogma,” portrays a smiling statue of a winking Jesus, with one arm outstretched and the other giving a thumbs-up, and in the film it was portrayed as the new symbol of the Catholic Church, Campbell explained. Though the meme portrays a playful Jesus, it also has been used for negative narratives, Campbell said.

“Memes aren’t just about humor, they’re not just lackadaisical,” she said. “They are serious spaces for us to find out how do people think about religion in contemporary society.”

Panelist Michael J. Murray, president of the philanthropy Arthur Vining Davis Foundations, spoke of the benefits when people of different faiths learn about other religions and their members.

“High religious literacy leads to higher positive sentiments toward those groups” and can “lubricate” social friction between religious groups, and that’s an important benefit to society, Murray said.
However, Americans’ knowledge of religion, of late, largely comes from social media, where the detrimental memes communicate erroneous ideas.

“But where do those who are talking about (those ideas) on social media get their ideas from?” Murray asked.

There is a worry, he said, that when someone hears something more than once via social media feeds, “they tend to regard it more as true,” even if at some point they had believed it to be false, Murray said. “There’s a worry about the noxious effect of social media because as we continue to hear the same thing over and over again, as it comes to our feed … it has the increasing ring of truth,” he said.

And though many may see religious literacy as good for society, if there’s no demand for it, “creating supply is fruitless,” he said.

However, there are indications that society wants to learn more about religion and others, Murray added. He pointed to a podcast that largely includes religious topics and has 50 million downloads a year and National Geographic’s “The Story of God with Morgan Freeman,” which became the most popular show for the channel in its history.

“This is an indication that there is indeed an appetite for this,” he said.

NEXT: Symposium examines religion’s role in lives of resettled refugees in U.S.