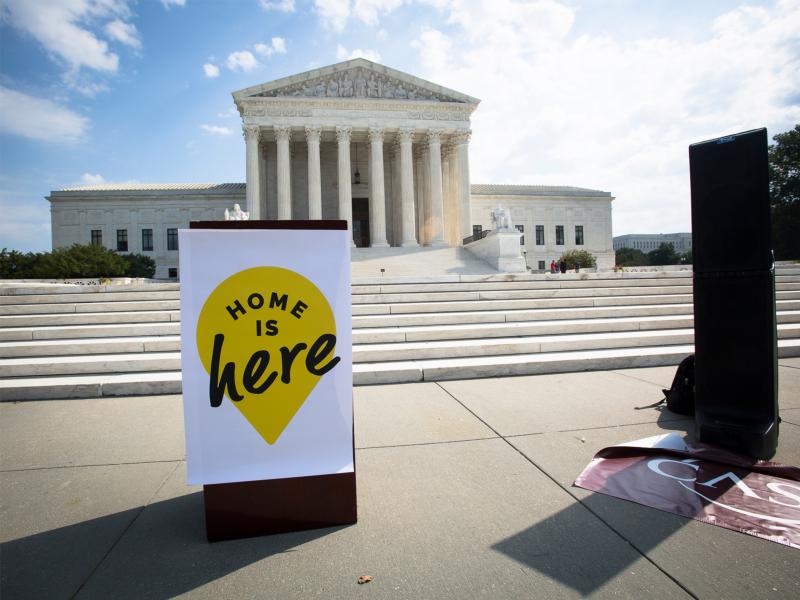 A podium is seen in front of the U.S. Supreme Court in Washington Oct. 2, 2019, prior to the start of a DACA demonstration. On Nov. 12, the court will hear arguments in a challenge to the Trump administration’s termination of the Deferred Action for Childhood Arrivals. The case will affect the lives of more than 700,000 young people who were brought to the U.S. as minors without documentation. (CNS photo/Tyler Orsburn)

WASHINGTON (CNS) — Catholic leaders joined more than 35 other groups that have filed friend-of-the-court briefs urging the Supreme Court to support the Deferred Action for Childhood Arrivals policy, known as DACA.

Supporters of the program, initiated by President Barack Obama in 2012, want the high court to keep in place three separate appellate court rulings that have blocked President Donald Trump’s 2017 order to end DACA. The program has protected about 800,000 young people, known as “Dreamers,” who arrived in the U.S. as children with their parents but without legal documentation. Qualifying recipients have the ability to obtain a work permit, health insurance and a driver’s license and, above all, they do not face deportation.

On Nov. 12, the justices will consider the three consolidated cases filed in New York, California and the District of Columbia against the program’s closing. The challengers in each of these cases have argued that Trump’s order to terminate DACA violated the Administrative Procedure Act, or APA, a federal law which governs the ways that federal agencies may make and enforce regulations.

Federal judges from the lower courts that have blocked ending the program have said the Trump administration needs to provide a clear explanation of exactly why the program should end.

Catholic leaders were part of two separate amicus briefs in support of DACA. One brief was filed by the Association of Catholic Colleges and Universities, Catholic Charities USA, the Catholic Health Association, the Catholic Legal Immigration Network Inc., the U.S. Conference of Catholic Bishops and the Center for Migration Studies, among others.

Another was filed by at least 20 Catholic groups joining hundreds of religious organizations. Catholics in the group included congregations of women religious and provinces of men’s religious orders, the Leadership Conference of Women Religious, the Maryknoll Office for Global Concerns, Pax Christi USA, Ignatian Solidarity Network, the Miami Archdiocese and Catholic Charities agencies in New Jersey and New York, among others.

The brief filed by the USCCB and other Catholic organizations highlighted DACA’s benefits for its recipients and society at large, and it also took aim at the way the program was terminated.

“The only justification provided for rescinding DACA was a new belief that the program was unlawful,” the brief said, adding that the Department of Homeland Security “failed utterly to consider and address the drastic consequences of rescission — among them the mass-scale separation of families. This failure to consider the facts underlaying the program violates the APA, and therefore the rescission is unlawful.”

It said the decision to end DACA was “arbitrary and capricious” because it “failed to consider the severe individual and social harm of family separation.”

The listing of religious groups that joined in a separate brief in support of DACA took up three and a half pages. It said that “since DACA’s inception in 2012, American religious communities of many faiths have supported the program as a just and compassionate response to a moral and humanitarian crisis.”

It also stressed “on the basis of faith and morality” that DACA recipients should be protected and termination of the program “would cause irreparable harm and constitute a severe detriment to the public.”

The brief also said the groups who were filing this plea to the high court “have firsthand knowledge of the valuable contributions to faith and community made by DACA recipients and understand all too well the harm that the termination of DACA would cause.”

The brief quoted one of its own, Catholic Charities Community Services of the Archdiocese of New York, which said: “DACA is an important first step to acknowledging and growing the human and social contributions and needs of young immigrants and of our own communities.”

It also said that when the government announced its decision to end DACA in 2017, “countless religious groups and leaders released statements of condemnation.”

Noting a few of the reactions in its brief, it said the USCCB called the decision reprehensible and unacceptable and “a heartbreaking moment in our history that shows the absence of mercy and goodwill.”

The Council on American-Islamic Relations described the decision as a “heartless action” that would create fear and anxiety for Dreamers and their families, and the Union for Reform Judaism and Central Conference of American Rabbis said it was a “morally misguided and poor public policy.”

The religious groups represented in the brief said institutions of faith have a “special interest in serving vulnerable immigrant populations.” They also stressed that from their work in other parts of the world, they know that deported Dreamers “would face tremendous challenges and even physical danger.”

It also spoke of the hardships the deported DACA recipients could face, based on work of Maryknoll Office for Global Concerns in Mexico, El Salvador, Guatemala and other countries. Along the U.S.-Mexico border, Maryknoll missioners daily hear “stories of desperation from the countries to which many Dreamers might be returned,” namely, poverty, starvation, extortion, sexual assault, gang violence and political oppression.

“Children raised in America knowing no other country should not have to face deportation into such conditions,” the brief added.

Representing the government, the solicitor general has filed a brief arguing that DACA cannot be reviewed under an “arbitrary and capricious” standard because the choice to end DACA is at the absolute discretion of the Department of Homeland Security.

The government also explained in its brief that it had several different reasons to shut down DACA, stressing that it believed DACA violated federal law.

DACA students who spoke at a panel discussion this fall at Trinity Washington University said they have felt in limbo since the Trump administration announced two years ago that it was shutting down the program many of them have benefited from.

The student advocates expressed a combination of frustration and dogged perseverance, but they also spoke of the fear and uncertainty that weighs on them almost daily.

A decision in the case is expected by next June.