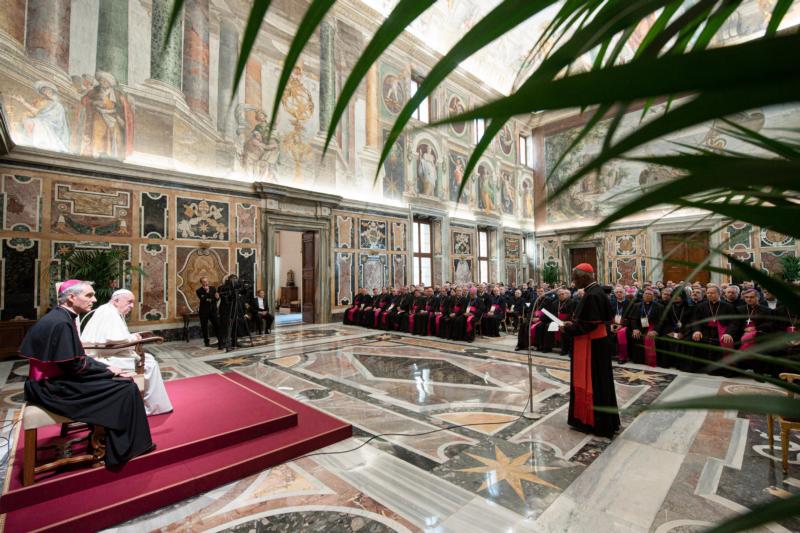 Cardinal Peter Turkson, prefect of the Dicastery for Promoting Integral Human Development, speaks during an Oct. 31, 2019, meeting with Pope Francis and participants of a course on international humanitarian law for military chaplains. (CNS photo/Vatican Media)

VATICAN CITY (CNS) — Military chaplains are called to educate the consciences of members of the armed forces so that even in war, the opposing side is not viewed merely as “an enemy to be destroyed,” Pope Francis said.

Meeting with participants of a course on international humanitarian law for military chaplains Oct. 31, the pope said the intrinsic dignity of those on the opposing side of a conflict, who are “created by God in his image,” too often is forgotten.

But “respect for the dignity and physical integrity of the human person, in fact, cannot depend upon the actions they have done, but it is a moral duty to which every person and every authority is called,” he said.

The Oct. 29-31 conference focused on the theme, “The loss of personal freedom in the context of armed conflicts: The mission of the military chaplain.”

In his address, the pope said that people detained in conflicts are often “victims of violations of fundamental rights,” including “abuse, violence and various forms of torture and cruel treatment that are inhuman and degrading.”

Civilians, he added, are also innocent victims of kidnapping and murder in these conflicts.

“Among these, we can count numerous men and women religious of whom we hear nothing more, or who have given their lives for their consecration to God and their service to others, without favoritism or nationalistic bias,” the pope said.

Military chaplains, he said, have a duty to ensure that the norms established by international humanitarian law be accepted by the men and women in uniform they are entrusted to serve.

The ethical foundation of those norms, he said, “must be properly and rigorously respected and enforced,” especially when it comes to detainees, “independent of the nature and gravity of the crimes they may have committed.”

“Let yourselves be guided by the words of the Gospel: ‘I was in prison and you came to me,'” the pope said.

Pope Francis said that as “servants of Christ in the military world,” chaplains should be visible witnesses of “that universal love which brings one person closer to another, no matter what the other’s race, nationality, culture or religion may be.”

“You are in their midst so that those words, which war contradicts and nullifies, can become a reality, so that they can give meaning to the lives of so many, both young and not so young who, as military personnel, do not want to be robbed of human and Christian values,” the pope said.

Mass on the first day of the conference, Oct. 29, was celebrated by Canadian Cardinal Marc Ouellet, prefect of the Congregation for Bishops, which supports military ordinariates around the world.

Cardinal Ouellet said that in today’s “rationalistic and relativistic age,” it is easy “to look for purely human or political solutions” to issues regarding international humanitarian law.

In doing so, he added, Christians can run the risk of “neglecting the resources of grace and faith.”

“Instead of turning to prayer and trust in God, we tend to act on our own and rush out scattered like a retreating army. Unfortunately, that is also true in the church and the synodal processes!” the cardinal said.

“May the Holy Spirit give us a renewed capacity of listening and discernment to progress in the discovery of new juridical instruments to safeguard and protect people deprived of freedom,” he said.

PREVIOUS: Franciscan brother in Kenya named U.N. Person of the Year in Africa

NEXT: Patriarchs press for preservation of Christian presence in Middle East