Franciscan brother in Kenya named U.N. Person of the Year in Africa 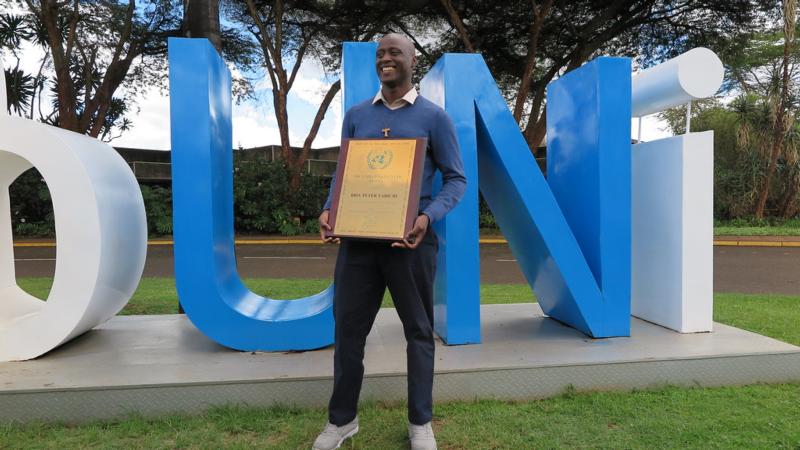 Franciscan Brother Mokaya Tabichi, who teaches mathematics and physics at Keriko Secondary School near Nakuru, Kenya, has been named Person of the Year by the United Nations in Kenya. He is pictured at U.N. headquarters in Nairobi, Kenya Oct. 24, 2019 after receiving the award. (CNS photo/courtesy United Nations in Kenya)

NAIROBI, Kenya (CNS) — A Franciscan brother who teaches mathematics and physics in rural Kenya has been

named Person of the Year by the United Nations in Kenya.

Brother Peter Mokaya Tabichi, who teaches at Keriko Secondary School near Nakuru, was recognized for his work in promoting education for all young people.

He received the award during United Nations Day celebrations in Nairobi Oct. 24.

Brother Tabichi declined to take full credit for the award in an interview with Catholic News Service Oct. 25, saying he preferred to share it with others.

“I feel shy to describe it as Brother Tabichi’s or that of the Catholic church where I belong to in matters of faith,” he said. “It is for each one of us, as many have chipped in, teachers, students and the local community.”

During the U.N. recognition, Brother Tabichi, 37, said that about 6 million girls of school age around the world — the majority of them in Africa — do not have the opportunity to attend classes.

“At the same time, 72 million children are in danger of missing education in Africa due to war, floods and other challenges,” he told the U.N. gathering.

Education, he said, should not be a matter of luck but should be a right.

“Today people continue to struggle even more than what I went through. The role of education should be to unlock the best in people and giving them the ability and skills to be able to relate and connect with others in the society,” he said.

The Franciscan encouraged the audience to take any steps possible, small or large, to impact the lives of the people around them. An individual does not have to hold a high position in society in order to effect change, he said.

“Start by doing the ordinary things and have dedication, generosity and passion in what you are doing and if you believe it can happen, then it will,” he said.

The award was the second honor for Brother Tabichi this year. In March, he received the Global Teacher of the Year Award from the London-based Varkey Foundation. The award came with a $1 million prize.

Brother Tabichi is the first African to win the award. He was chosen from among 10,000 nominees from 17 countries, according to foundation.

He told CNS he planned to use part of the cash prize to boost technology at the school, improve the school’s physical facilities and support the local community in Nakuru.

“Openly speaking, there are many challenges, but we shall confidently and hopefully overcome them, all in the name of making a difference in the education field around us,” he said.

“As a local school, my school as well as students is in dire need,” he added. “I plan to chip in some of the money to the needy areas.”

In addition to the awards, Brother Tabichi was was invited to the White House by President Donald Trump in March and addressed the U.N. General Assembly in New York in October.

PREVIOUS: Pope adds feast of Our Lady of Loreto to church calendar

NEXT: In war, human dignity must be protected, pope tells military chaplains