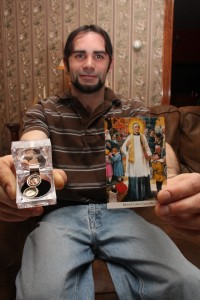 William Glisson holds the relic and prayer card of Blessed Louis Guanella, who will be canonized by Pope Benedict XVI Sunday, Oct. 23 in Rome.

VATICAN CITY (CNS) — Thanks to the healing of a young man from the United States, who was severely injured in a rollerblading accident, Italian Blessed Louis Guanella will be among three new saints proclaimed by Pope Benedict XVI in late October.

William Glisson, now 30 and married, was 21 years old when he and a friend were rollerblading down the Baltimore Pike in Springfield, Delaware County. Glisson was skating backward, without a helmet, hit a hole and fell, hitting his head.

The young man was in a coma for nine days and underwent skull surgery twice, but the doctors’ prognosis was still grave.

According to the website of the Opera Don Guanella, Glisson was released from the hospital less than a month after the accident and returned to work just seven months later.

Glisson’s healing was accepted by the Vatican as the miracle needed for Blessed Guanella’s canonization, which is scheduled for Oct. 23.

The Italian priest lived 1842-1915 and founded the Servants of Charity, the Daughters of St. Mary of Providence, and the Confraternity of St. Joseph, whose members pledge to pray for the sick and dying.

NEXT: Schools invited to compete for grants from Beneficial Bank Foundation