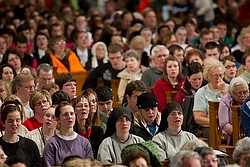 People pack the Basilica of the National Shrine of the Immaculate Conception for the opening Mass of the National Prayer Vigil for Life in Washington Jan. 22. The annual vigil precedes the March for Life, the anti-abortion demonstration that marks the 1973 Supreme Court decision that legalized abortion across the nation. (CNS photo/Nancy Phelan Wiechec)

WASHINGTON (CNS) — Participants at the annual March for Life were urged in advance of the march not to let themselves be compromised in their beliefs as the federal government pursues regulations that Catholic leaders say constitute an attack on conscience and religious liberty.

“I beg and pray for the young people present and all youth and young adults not to be compromised in your dedication to the protection of life of each human person, born and unborn,” said Cardinal Daniel N. DiNardo of Galveston-Houston. “Keep it before your eyes and in your hearts immediately. Threats against life and against the consciences of those who say ‘yes’ to life must be met with timely and unwavering action, in our families and institutions, and yes, in the public square.”

Cardinal DiNardo, chairman of the U.S. bishops’ Committee on Pro-Life Activities, made his remarks during his homily at the Jan. 22 opening Mass for the National Prayer Vigil for Life. The overnight vigil, which included a closing Mass Jan. 23 and hourly Holy Hours in between, was conducted at the Basilica of the National Shrine of the Immaculate Conception in Washington.

The cardinal linked the 39-year struggle to end abortion on demand with Jan. 20’s announcement from U.S. Health and Human Services Secretary Kathleen Sebelius that most religious organizations would have to cover contraceptives and sterilization free of charge in their employee health plans, rejecting appeals from Catholic groups to widen the exemption.

“Never before in our U.S. history has the federal government forced citizens to directly purchase what violates our beliefs,” Cardinal DiNardo said, adding that the issue is “the survival of a cornerstone constitutionally protected freedom that ensures respect for conscience and religious liberty.”

“Many of you have pointed out that concerted efforts have been made to deny the right of conscientious objection on the part of Catholic individuals and institutions with regard to cooperation in intrinsically evil practices. Others have spoken to me of a worrying tendency to reduce religious freedom to mere freedom of worship without guarantees of respect for freedom of conscience,” he quoted Pope Benedict as saying.

“In light of last Friday’s announcement about health care mandates, it seems that the Holy Father has nailed the issue in advance,” Cardinal DiNardo said. “His calls for courage to counter a reductive secularism which would delegitimize the church’s participation in public life and debate have targeted the issues we face in our pro-life efforts, to defend those who defend human life and to defend their religious liberty.”

Cardinal DiNardo pointed to gains made by pro-lifers, including “a record number of state laws that now restrict abortions. State prosecutors have begun to prosecute late-term abortionists who deny life and injure and maim women.”

Cardinal-designate Timothy M. Dolan of New York, who celebrated the closing Mass, repeatedly lauded the “radiant inspiration” generated by the marchers who gather at the shrine each year.

He said that after nearly 40 years of legalized abortion, “we might be tempted to give up.”

But “not us,” said Cardinal-designate Dolan, president of the U.S. bishops. “Not for thousands who have stayed up all night here in prayer. Not for hundreds of thousands who will march today with the word we have received ringing in their ears.”

For vigilers who spend the night in the shrine, Cardinal Dolan brought two bits of “good news” to them: “The New York Giants did win last night to go to the Super Bowl,” and weather around Washington prompted a delay in the regular opening time for the federal government. “That leaves less chance to pass a new anti-life regulatory rule,” he said.

Recalling the story of King David, whose anointing as king of Israel was part of the Old Testament reading for the Mass, Cardinal-designate Dolan noted that little David killed Goliath. “The New York Giants may have won, but Goliath the giant did not,” he said.

The two-hour, 37-minute opening Mass featured a 39-minute entrance procession with four cardinals, 31 other bishops, 300 priests, 75 deacons and 700 priesthood and diaconate candidates and altar servers — among them what might have been the first woman in liturgical attire to take part in such a procession for the National Prayer Vigil for Life. Cardinal DiNardo said near the end of the Mass that he had invited altar servers from the Archdiocese of Galveston-Houston to come to Washington to take part.

By contrast, the closing Mass Jan. 23 was a much shorter affair, lasting only 70 minutes with a seven-minute entrance procession. Cardinal-designate Dolan was joined by three other bishops, 63 priests, five deacons and 10 servers.

Seventeen television monitors were set up around the shrine so worshippers could see the Masses from any vantage point. The number was up from 14 last year. “It seems that this just keeps getting bigger and bigger,” said shrine spokeswoman Jacquelyn Hayes.

PREVIOUS: HHS delays, but does not change, rule on contraceptive coverage

NEXT: HHS move amounts to ‘to hell with you,’ bishop says as protests mount