HHS delays, but does not change, rule on contraceptive coverage 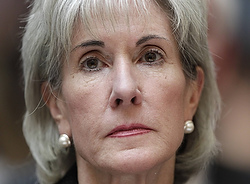 WASHINGTON (CNS) — Although Catholic leaders vowed to fight on, the Obama administration has turned down repeated requests from Catholic bishops, hospitals, schools and charitable organizations to revise its religious exemption to the requirement that all health plans cover contraceptives and sterilization free of charge.

Instead, Kathleen Sebelius, secretary of the U.S. Department of Health and Human Services, announced Jan. 20 that nonprofit groups that do not provide contraceptive coverage because of their religious beliefs will get an additional year “to adapt to this new rule.”

“This decision was made after very careful consideration, including the important concerns some have raised about religious liberty,” Sebelius said. “I believe this proposal strikes the appropriate balance between respecting religious freedom and increasing access to important preventive services.”

But Cardinal-designate Timothy M. Dolan of New York, president of the U.S. Conference of Catholic Bishops, said the Obama administration had “drawn an unprecedented line in the sand” with the decision.

“The Catholic bishops are committed to working with our fellow Americans to reform the law and change this unjust regulation,” he added. “We will continue to study all the implications of this troubling decision.”

Those sections “refer to churches, their integrated auxiliaries, and conventions or associations of churches, as well as to the exclusively religious activities of any religious orders,” according to a footnote to the interim final rule.

Catholic groups, including the USCCB, the Catholic Health Association and Catholic Charities USA, called that exemption too narrow, saying it would require Catholic groups to stop all services to those who were not Catholic and would inappropriately involve the government in decisions about whether an organization is “religious enough” to be exempted.

Sebelius’ announcement brought an outcry from Catholic leaders and a sigh of relief from groups such as Planned Parenthood and NARAL Pro-Choice America, which had opposed any moves to weaken the contraceptive mandate or strengthen the religious exemption.

In a video posted on the USCCB website, Cardinal-designate Dolan said the decision put the Obama administration “on the wrong side of the Constitution” and should be rescinded.

“In effect, the president is saying we have a year to figure out how to violate our consciences,” the cardinal-designate said in a separate statement. “To force American citizens to choose between violating their consciences and forgoing their health care is literally unconscionable. It is as much an attack on access to health care as on religious freedom. Historically this represents a challenge and a compromise of our religious liberty.”

Franciscan Sister Jane Marie Klein, who chairs the board at Franciscan Alliance, a system of 13 Catholic hospitals, characterized the decision as “nothing else than a direct attack on religion and First Amendment rights.”

Sister Carol Keehan, a Daughter of Charity who is president and CEO of the Catholic Health Association, said the announcement was a “missed opportunity to be clear on appropriate conscience protection.”

“The challenge that these regulations posed for many groups remains unresolved,” she added. “This indicates the need for an effective national conversation on the appropriate conscience protections in our pluralistic country, which has always respected the role of religions.”

Father Larry Snyder, president of Catholic Charities USA, said he was “extremely disappointed” that the administration chose to ignore calls from religious institutions to broaden the exemption.

“With the existing restrictive definition in this mandate, the ministry of Jesus Christ himself would not be considered a religious entity,” he said.

“Just as the identity of Catholic Charities is firmly rooted in the teaching of its church, the identity of this nation includes a mandated respect of religious beliefs,” Father Snyder added. “It is this long-standing history that gave us hope that as a religious institution we would be granted the freedom to remain faithful to our beliefs while also being committed to providing access to quality health care for our 70,000 employees and their families across the country.”