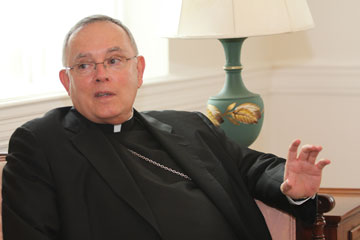 NASHVILLE, Tenn. (CNS) — It will be up to Catholic voters to convince the federal government to rescind a recent decision by the U.S. Department of Health and Human Services to go forward with a mandate that all health insurance plans cover contraceptives and sterilization free of charge, said Archbishop Charles J. Chaput.

“Bishops can’t tell politicians what to do, but Catholic voters can,” the Archbishop said during a visit to Nashville. Political leaders respond to pressure from citizens, he added, and Catholics ought to demand respect for religious values.

Archbishop Chaput joined fellow bishops in urging Catholics in the pew to be more politically active.

“The very principle of religious freedom, the first freedom in the Bill of Rights, is at stake here,” he said. “That’s a lot to be at stake. Once it’s lost, you don’t get it back.”

The archbishop celebrated a Mass of investiture at Nashville’s Cathedral of the Incarnation Jan. 26 for Dominican Sister Mary Sarah Galbraith as the new president of Aquinas College, which is owned and operated by the Dominican Sisters of St. Cecilia Congregation. At the Mass, she was formally installed in the post she has held since last summer.

The Mass was on the feast day of St. Thomas Aquinas, the college’s namesake. Archbishop Chaput celebrated it for Nashville Bishop David R. Choby, who was in Rome. He was among the bishops from Louisiana, Mississippi, Tennessee, Alabama and Kentucky making their “ad limina” visits to report on the status of their dioceses to the Pope and Vatican officials.

The Philadelphia archbishop knew Sister Mary Sarah from Denver, when he was archbishop there and she was a teacher at a parish school there at the time.

In an interview with the Tennessee Register, Nashville’s diocesan newspaper, Archbishop Chaput addressed the contraceptive mandate and the Jan. 20 announcement by HHS Secretary Kathleen Sebelius that religious organizations could delay but not opt out of the required coverage and that the religious exemption as first released would go into effect unchanged.

Catholic and other religious leaders have objected that the exemption is written so narrowly that institutions such as hospitals, schools and social service agencies would not qualify.

The mandate and the narrow exemption are examples of society’s growing indifference to religious values, the archbishop said.

Society’s hostility to faith and religion comes “from a secularized people who don’t see the importance of respecting the moral values of other people if those values stand in the way of their goals,” he said.

Bishops across the U.S. condemned the HHS regulations when they were first proposed and worked to persuade federal officials to change them and to broaden the religious exemption. They have been forceful in their condemnations of the latest announcement as well.

“The bishops as a body are very committed to taking a firm stance on this,” as evidenced by the establishment of the new Ad Hoc Committee for Religious Liberty, Archbishop Chaput said.

Because the Church did not work harder to combat indifference to religious values in society earlier, “now it’s come back to bite us in the face,” he said.

One option would be to stop offering health insurance as an employee benefit, Archbishop Chaput said. Catholic institutions presumably would increase employees’ pay so they could buy insurance on their own, he said, but that would mean their health insurance premiums would most likely be more expensive.

“Or we can stop helping people who aren’t Catholic, but Catholics always take care of other people,” Archbishop Chaput said. “The church has to live in the broader world or else it’s not living its values.”

Catholic leaders might be forced to choose the option of civil disobedience, Archbishop Chaput said. Catholics are good citizens, he said, “but we’re God’s citizens first.”

The best outcome would be for public pressure to force the government to change the contraceptive mandate, Archbishop Chaput said.

The arguments supporting it say it promotes women’s health, but Archbishop Chaput said the issue isn’t one of women’s rights. The Catholic Church is a great supporter of women’s rights, he said, “but not at the point of giving up our basic values.”

For Aquinas College, the archbishop will serve on a new Presidential Advisory Council, which includes clergy and laypeople.

Aquinas College, founded in 1961, has about 750 students studying in its liberal arts, business administration, teacher education and nursing programs.

NEXT: Half a century after Vatican II, a year of faith and debate