Pope warns of threat to freedom of religion, conscience in US 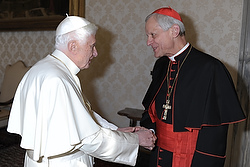 VATICAN CITY (CNS) — Pope Benedict XVI warned visiting U.S. bishops that “radical secularism” threatens the core values of American culture, and he called on the Church in America, including politicians and other laypeople, to render “public moral witness” on crucial social issues.

The Pope spoke Jan. 19 to a group of U.S. bishops who were in Rome for their periodic “ad limina” visits, which included meetings with the pope and Vatican officials, covering a wide range of pastoral matters.

Opening with a dire assessment of the state of American society, the Pope told the bishops that “powerful new cultural currents” have worn away the country’s traditional moral consensus, which was originally based on religious faith as well as ethical principles derived from natural law.

Whether they claim the authority of science or democracy, the Pope said, militant secularists seek to stifle the Church’s proclamation of these “unchanging moral truths.” Such a movement inevitably leads to the prevalence of “reductionist and totalitarian readings of the human person and the nature of society.”

The Pope drew an opposition between current “notions of freedom detached from moral truth” and Catholicism’s “rational perspective” on morality, founded on the conviction that the “cosmos is possessed of an inner logic accessible to human reasoning.” Using the “language” of natural law, he said, the Church should promote social justice by “proposing rational arguments in public square.”

Opening with a dire assessment of the state of American society, the Pope told the bishops that “powerful new cultural currents” have worn away the country’s traditional moral consensus, which was originally based on religious faith as well as ethical principles derived from natural law.

Coming at the start of an election year, Pope Benedict’s words were clearly relevant to American politics, a connection he made explicit by mentioning threats to “that most cherished of American freedoms, the freedom of religion.”

The Pope said that many of the visiting bishops had told him of “concerted efforts” against the “right of conscientious objection … to cooperation in intrinsically evil practices” — an apparent reference to proposals by the U.S. Department of Health and Human Services, opposed by the U.S. bishops, that all private health insurance plans cover surgical sterilization procedures and artificial birth control.

In response to such threats, Pope Benedict said, the Church requires an “engaged, articulate and well-formed Catholic laity” with the courage and critical skills to articulate the “Christian vision of man and society.” He said that the education of Catholic laypeople is essential to the “new evangelization,” an initiative that he has made a priority of his pontificate.

Touching on one of most controversial areas of church-state relations in recent years, the Pope spoke of Catholic politicians’ “personal responsibility to offer public witness to their faith, especially with regard to the great moral issues of our time,” which he identified as “respect for God’s gift of life, the protection of human dignity and the promotion of authentic human rights.”

The Pope was not specific about the bishops’ relationship with such politicians, merely encouraging the bishops to “maintain contacts” with them and “help them understand” their duty to promote Catholic values.

While acknowledging the “genuine difficulties” facing the Church in the United States, the Pope concluded on a hopeful note, pointing to a growing appreciation for “Judeo-Christian” civic values, and a “new generation of Catholics,” who he said will play a “decisive role in renewing the Church’s presence and witness in American society.”

Before the speech, Cardinal Donald W. Wuerl, archbishop of Washington, greeted the Pope with brief remarks that recalled his 2008 visit to the United States.

The Pope addressed bishops from the District of Columbia, Maryland, Delaware, Virginia, West Virginia, the U.S. Archdiocese for the Military Services, and the Virgin Islands.

PREVIOUS: As Tet nears, migrants return to Vietnam, get chance to renew faith

NEXT: Pope calls on Syria to address citizens’ legitimate demands