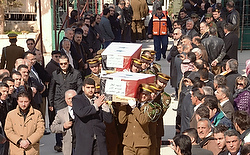 VATICAN CITY (CNS) — As a sectarian conflict in Syria intensified, Pope Benedict XVI called on all Syrians to begin a process of dialogue and reminded the government of its duty to recognize its citizens’ legitimate demands.

In Beirut, the patriarch of the Syriac Catholic Church warned against toppling Syrian President Bashar al-Assad, calling for dialogue to solve the crisis in the country.

“Our fear since the beginning of the bloody crisis in Syria was that the refusal of any sort of dialogue between the regime and the opposition will surely create a state of chaos that will definitely lead to a civil war,” Syriac Patriarch Ignatius Joseph III Younan told Catholic News Service.

“The world must sustain all efforts for a dialogue to solve problems and uphold the democracy in a realistic and gradual way. Forcing the departure of the Syrian president will be a step for a civil war based on confessionalism,” the patriarch said.

In St. Peter’s Square at the Vatican Feb. 12, the pope expressed his concern for “the dramatic and increasing episodes of violence in Syria.”

At the end of his Angelus prayer, he said he was praying for everyone who has been killed, injured and affected by a conflict that is “increasingly worrisome.”

“I renew an urgent appeal to put an end to the violence and bloodshed,” he said.

“I invite everyone, especially Syria’s political authorities, to favor the path of dialogue, reconciliation and a commitment to peace,” he said.

“It’s urgent to respond to the legitimate aspirations of the various sectors of the nation, as well as to the wishes of the international community, which are concerned about the common good of the whole country and the region,” he said.

A nationwide uprising against al-Assad’s government began last March, but Syrian security forces stepped up efforts to defeat the opposition movement, especially in Homs, a center of resistance.

Bomb blasts in Aleppo Feb. 10 left at least 28 people dead and 200 others wounded.

The United Nations has not provided an updated death toll since it estimated in December that more than 5,000 people had been killed since the violence began last March.

Patriarch Younan, noting that Syria is among the most secularized countries in the Middle East, warned that a confessional war in Syria would be far worse than a political one.

“Remember Iraq,” he said, “where Christians were abused, killed in their churches and houses and forced to exile.” As a result, “they have been reduced to less than one-third of their previous numbers.”

The patriarch said that, so far, he has not heard of any direct targeting against churches in Syria, but he pointed to “the innocent victims — civilians as well as some clergy — (that) have fallen since the beginning of armed opposition.”

“We also hear of a massive exodus from villages and neighborhoods, due to threats coming from the so-called revolutionary committees in the name of God,” he said.

A native of Hassakeh, Syria, Patriarch Younan is the patriarch of approximately 150,000 Syriac Catholics worldwide, with nearly 40,000 in Syria.

The Archdiocese of Homs, he said, is the second-largest Syriac eparchy among the four still existing in Syria. The province of Homs, home to Sunnis, Alawites and Christians, used to be known for its tolerance until the last two decades with the resurgence of Islamic radicalism, he said.

“Christians used to live in peace with their neighbors, either in the city of Homs or in the countryside, where some villages are all Christians,” Patriarch Younan said.

PREVIOUS: Pope warns of threat to freedom of religion, conscience in US