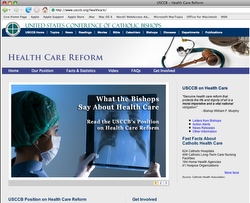 The U.S. Conference of Catholic Bishops launched its Web site, www.usccb.org/healthcare, in 2009 to help clarify information about various aspects of the debate on health care reform. (CNS)

WASHINGTON (CNS) — The chairman of the U.S. bishops’ domestic policy committee said that “long before the current battles” over health care reform and the federal contraception mandate, “the Catholic Church was persistently and consistently advocating for this overdue national priority” of universal health care.

“Since 1919, the United States Catholic bishops have supported decent health care for all and government and private action to advance this essential goal,” said Bishop Stephen E. Blaire of Stockton, Calif., chairman of the Committee on Domestic Justice and Human Development of the U.S. Conference of Catholic Bishops.

He issued his remarks Feb. 14 in response to a statement made a day earlier by White House press secretary Jay Carney, who said at a press briefing: “I would simply note with regard to the bishops that they never supported health care reform to begin with.”

“This is not the case,” the bishop said.

“Long before the current battles, the Catholic Church was persistently and consistently advocating for this overdue national priority,” he said.

Carney was responding to a question from a reporter asking what further steps the Obama administration planned to take to address the bishops’ and others’ criticism that despite a newly announced revision to it, the federal mandate requiring all health plans to include no cost-coverage of contraception and sterilization infringes on religious liberty.

The release said the USCCB’s criteria insisted reform should be truly universal, protect human life and conscience and not discriminate against immigrants.

“The USCCB opposed the final legislation because it failed this test, a judgment sadly but clearly borne out by the failure of the law and the recent regulation to protect conscience and religious liberty,” explained Bishop Blaire.

“I hope those who made or repeated this false statement will correct the record and report the bishops’ long and consistent record of support for health care which protects the life, dignity and consciences of all, especially the poor and vulnerable,” he said.

NEXT: Priest installed as head of new ordinariate during Mass in Houston