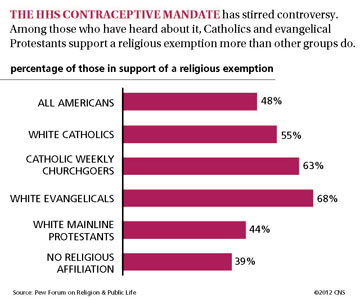 The HHS contraceptive mandate has stirred controversy. Among those who have heard about it, Catholics and evangelical Protestants support a religious exemption more than other groups do. (CNS graphic/Emily Thompson)

WASHINGTON (CNS) — Catholic bishops across the country have expressed their disapproval of President Barack Obama’s newly announced revision to the contraceptive mandate in the health reform law, saying it does nothing to change what they and other religious leaders and organizations consider an intrusion on religious liberty.

Health and Human Services Secretary Kathleen Sebelius announced Jan. 20 that religious organizations could delay but not opt out of the requirement that all health plans cover contraceptives and sterilization free of charge.

On Feb. 10, Obama announced a revision that allows religious employers not to offer such services to their employees but would compel insurance companies to do so. The change came after three weeks of intensive criticism that the contraception mandate would require most religious institutions to pay for coverage they find morally objectionable.

And now questions have been raised over how that revision will pertain to self-insured parties, like many dioceses and Catholic organizations, and whether it could still force entities morally opposed to contraception to pay for such services.

“We can appreciate the efforts of the White House to quiet the furor over the president’s HHS mandate that would violate the religious freedom of millions of Catholics and other American citizens,” Miami Archbishop Thomas G. Wenski said in a Feb. 10 statement.

He noted that hundreds of Catholic universities, colleges, hospitals and other entities offered comments to HHS before the mandate was announced but they “were given short shrift by the administration.”

“The administration continues to insist that the issue is about contraception; we disagree. It is about the first freedom of our Bill of Rights: the freedom of religion and respect for the rights of conscience,” he added.

“Unfortunately, he did not really respond to the deep moral concerns raised by America’s Catholic community,” he said in a Feb. 13 statement.

The archbishop said the fact the revision requires payment of contraceptive coverage to now be borne by insurance companies, rather than religious employers, “completely misses the point. The issue here is not one of bookkeeping or accounting. It is a matter of moral principle and religious liberty,” he said.

He also said the government has “no right to require the Catholic Church or other institutions to pay for — even indirectly — products and services that we find to be immoral and unconscionable. Again, this is not a question of contraception. It is a question of religious liberty. This mandate continues to represent a grave government intrusion on Catholic consciences and on the freedom of our Catholic institutions.”

“Regardless of how it is characterized, shifting the cost of these drugs and procedures to insurance companies does not make their requirement any less objectionable or lessen the infringement on our religious liberty and rights of conscience,” Cardinal Wuerl wrote in a Feb. 13 e-letter sent to Catholics of the Archdiocese of Washington.

The cardinal said the “only complete solution to the problem that this mandate poses” would be for Congress to pass the Respect for Rights of Conscience Act introduced by U.S. Rep. Jeff Fortenberry, R-Neb.

Cardinal-designate Timothy M. Dolan of New York told Catholic News Service Feb. 13 in Rome that Fortenberry’s bill would produce an “ironclad law simply saying that no administrative decrees of the federal government can ever violate the conscience of a religious believer individually or religious institutions.”

“It’s a shame, you’d think that’s so clear in the Constitution that that wouldn’t have to be legislatively guaranteed, but we now know that it’s not,” he added.

The cardinal-designate said with his revision to the HHS mandate, the president offered “next to nothing.”

“There’s no change, for instance, in these terribly restrictive mandates and this grossly restrictive definition of what constitutes a religious entity,” he said. “The principle wasn’t touched at all.”

Other U.S. church leaders in Rome on a periodic “ad limina” visit to the Vatican echoed that opposition to the HHS mandate and the revision.

Cardinal Francis E. George of Chicago said he was disappointed the issue is being perceived as something that isolates the bishops from the faithful. “To try to divide Catholics is a new challenge to religious liberty,” he said.

Bishop Daniel R. Jenky of Peoria, Ill., said no president has ever “tried to tell us what to believe or define what is our ministry.” The notion the church “must cooperate with intrinsic evil is appalling,” he said.

Cardinal Wuerl encouraged Catholics not to become complacent or distracted by “incomplete proposals presented as definitive solutions.” He said the bishops’ Ad Hoc Committee for Religious Liberty, chaired by Bishop William E. Lori of Bridgeport, Conn., would be working on action steps to oppose the mandate.

In a Feb. 13 phone interview with CNS, Bishop Lori also called for a legislative remedy, saying, “Our religious freedom is too precious to be protected only by regulations. It needs legislative protection.”

An Obama administration official who asked not to be named told CNS in an email Feb. 13 that the White House plans in the coming weeks to convene “a series of meetings with faith community leaders” about the HHS mandate. He said a particular focus of the meetings would be self-insured group health plans that cover the employees of many Catholic dioceses and institutions.

“The administration will work with faith-based organizations, insurers and other interested parties to develop policies that respect religious liberty and ensure access to preventive services for women enrolled in self-insured group health plans sponsored by religious organizations,” he said.

The official said the meetings would be convened “in the coming days” and that “the bishops and others” would be invited.

Meanwhile, Bishop Blase J. Cupich of Spokane, Wash., said the current situation about the HHS mandate provides an opportunity “to have a deeper and, on a prolonged basis, a fundamental dialogue about the role of religion in society in general and the nature of religious liberty, especially as it applies to faith-based charitable, health and social service ministries in the United States.”

Writing in the March 5 issue of America magazine, a Jesuit-run national weekly, Bishop Cupich quoted from Obama’s biography, “Dreams From My Father,” and his 2008 campaign speech on racism to show that “the president, relying on his personal experience with church, … has not only the potential but also the responsibility to make a significant contribution to this more sustained and expansive discussion.”

The bishop offered points of “common ground that may shape both the dialogue that needs to take place to unpack the details following the president’s announcement Friday, and the further national discussion on the role of religion in society.”

He said the church “should make every attempt to clarify the misrepresentations about its intention,” emphasizing that it “is not trying to impose its will on others” by objecting to being forced to participate in activities that violate its core religious beliefs.

The state, for its part, should be reluctant “to make national policy that is so inflexible that it fails to take into account the country’s diversity,” Bishop Cupich said.

NEXT: Blaire: Catholic Church has long sought ‘decent health care for all’