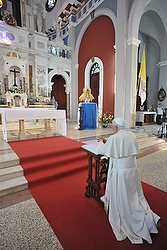 Pope Benedict XVI prays inside the Shrine of Our Lady of Charity of El Cobre in Cuba March 27. The statue of the Virgin of El Cobre, patroness of Cuba, is seen atop the stand draped in blue. (CNS photo/L'Osservatore Romano via Reuters)

Jesuit Father Federico Lombardi, the Vatican spokesman, told reporters late March 27 that Cuban President Raul Castro and asked the Cuban leader for further freedoms for the while he could not give the press details about the humanitarian cases raised during the meeting, the pope did give Castro specific names of people in detention or suffering for other reasons the government was in a position to help alleviate.

The pope also asked the government to consider declaring Good Friday a public holiday, Father Lombardi said, adding that the pope explained the significance for Catholics of the day commemorating Jesus’ death. The pope said he hoped that, just as Blessed John Paul II’s trip to Cuba in 1998 led to Cuba recognizing Christmas as a public holiday, he hoped Castro’s government would do the same with Good Friday.

Father Lombardi said Castro did not make a decision at the meeting about Good Friday, nor did the pope expect him to, but he hoped the Cuban government would consider the request.

The spokesman said the pope expressed his pleasure at how church-state relations had improved over the last 14 years and expressed his hope for “further developments” so that the church could increase its contributions to Cuban society.

While not giving reporters a specific list of requests beyond the Good Friday holiday, Father Lombardi said that “if the pope says the church wants to act for the good of society, it means he hopes the church can express itself in additional ways,” including by running schools and hospitals and having greater access to the media.

“The pope, like every Catholic, is asking for a chance to give our best” for the good of society, he said.

The private meeting was the third encounter between Pope Benedict and Castro in two days; the president welcomed the pope at the airport in Santiago de Cuba March 26 and greeted him briefly at the end of the pope’s Mass there.

After their private meeting, the pope and president exchanged official gifts. Castro gave Pope Benedict a wooden sculpture of Cuba’s patroness, Our Lady of Charity of El Cobre, and the pope gave the president a replica of a 15th-century atlas that has an annex featuring the newly discovered Americas.

The meeting took place in the Palace of the Revolution, a building housing the president’s office, the Cabinet offices and the Central Committee of the Communist Party of Cuba.

Castro, 80, has served as Cuba’s president since 2008 when his older brother, Fidel, now 85, resigned for health reasons.

While the pope met privately with the president, Cardinal Tarcisio Bertone, Vatican secretary of state, and other Vatican officials met with Castro’s vice president and other government ministers.

The pope had arrived in Havana at noon from Santiago de Cuba, where he celebrated Mass March 26 and prayed before an image of Our Lady of Charity of El Cobre.

Havana Cardinal Jaime Ortega Alamino greeted the pope, a troupe of young ballet dancers performed and a youth orchestra played. A small group of people — perhaps 100 — were allowed to stand outside by the terminal to welcome the pope. Wearing white T-shirts and baseball caps, they chanted “Benedicto, amigo, Cuba esta contigo” (“Benedict, friend, Cuba is with you”).

NEXT: Day of prayer and fasting to be observed today