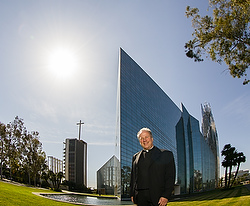 WASHINGTON (CNS) — Bishop Tod D. Brown of Orange, Calif., said June 9 that Christ Cathedral is the new name of the former Crystal Cathedral, now owned by the diocese and once home to the ministries of the Rev. Robert H. Schuller.

He also announced Father Christopher Smith has been named episcopal vicar for the cathedral.

Bishop Brown, in remarks during the ordination Mass for four new diocesan priests, added that “Catholics throughout the diocese, and all across America, are eagerly anticipating” when the first Mass will be celebrated at the cathedral in Garden Grove, Calif.

In a telephone interview from Orange three days before the official announcement, Father Smith told Catholic News Service that “the only requirement was that the name be Christological in nature.”

The new name was one of the most popular among suggestions from 4,129 Catholics. It was officially approved by the Vatican.

Msgr. Heher said Rev. Schuller, the televangelist who founded the Crystal Cathedral and led its popular nationally broadcast TV program “Hour of Power,” told him he had built the cathedral for Christ.

“Dr. Schuller said he knew that under Roman Catholic ownership, the Crystal Cathedral would be with Christ forever. It was a powerful gesture of confidence,” the priest said.

Once the sale of the Crystal Cathedral and its nearly 34-acre campus to the diocese for $57.5 million was finalized earlier this year, diocesan officials said critical design upgrades would be needed before the church could be used as a Catholic cathedral. The process entailed the selection of an architect, a liturgical consultant and a committee devoted to interior renovations.

“It will require a baptismal font and various devotional shrines. Of course, a cathedra (the chair of the bishop) will be needed in order for it to be a cathedral,” said Giacomi. “No renovations, however, will take place on the outside.”

The designs will be submitted and reviewed by the Vatican before any actual work is done. After the renovation is completed, there will be a dedication for the cathedral. Msgr. Heher added, “It is a gorgeous rite. The ritual for the dedication of a church almost mirrors a baptism.”

In November, a court ruled the diocese had the winning bid for the landmark structure and property when it was put up for auction as part of the bankruptcy proceedings for Rev. Schuller’s Crystal Cathedral Ministries.

The diocese’s decision to acquire the property was widely praised as a wise fiscal decision.

Bishop Brown had already been reviewing plans for building a new cathedral, which would have cost $100 million or more, when the Crystal Cathedral went up for sale.

Demographically, the Diocese of Orange has experienced ongoing growth, both from young Catholics raising large families and from new Hispanic Catholics coming into the diocese, the diocesan officials told CNS in the interview. It is comprised of just one county — Orange County — and has a Catholic population of 1.28 million out of a total population of 3 million in a 782-square-mile area.

Christ Cathedral has the capacity for an expected Mass attendance of 8,000 to 10,000. The grounds will feature a memorial garden and cemetery. In keeping with the ecumenical nature of the purchase, the campus also will contain a nondenominational chapel in its Hope Tower.

As part of the purchase agreement, the current Crystal Cathedral ministry will lease space at St. Callistus Church in Garden Grove, beginning in 2013.

Most members of the Crystal Cathedral congregation feel optimistic about their future, the three Catholic officials told CNS, but one member has filed a $30 billion lawsuit against the Catholic Church for allegedly desecrating sacred ground. Few expect his lawsuit to succeed. Father Smith described it as “an isolated event. We have done a good job of winning back the congregation.”

Though they are few, the new Christ Cathedral has its Catholic critics, including one Italian newspaper that cited the building when calling for more traditional-looking churches.

Asked his reaction to the article, Father Smith responded, “Even building a cathedral from the ground up would mean a modern design. John Burgee, one of the original architects, said the building is essentially a shell, and the possibilities for the inside are limitless.”

Msgr. Heher added, “The original inspiration was the great California weather. What we have is beautiful weather and palm trees. The Crystal Cathedral took advantage of the beauty of the location that we live in.”

The glass walls of the building give it an open-air effect and incorporate the modern-art style into a natural setting. Palm trees dot the property right around the structure.

Father Smith told CNS, “I think this is a great moment for the church in the world. We are working with a congregation who is not Catholic, who is losing their place.

“We are all doing this in a way that is respectful for other people,” he continued. “There is such an image of respect and unity coming out of this agreement — the ecumenism alone makes this all worth it. This is a beautiful witness to Christ in the world.”

NEXT: Church leaders tell eucharistic pilgrims Ireland is on path to renewal