Philadelphia Archdiocese to host 2015 meeting that Pope may attend 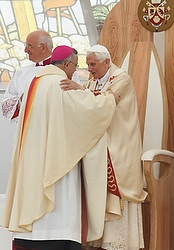 MILAN (CNS) — When the Archdiocese of Philadelphia hosts the United States’ first World Meeting of Families in 2015, it will need to be a significantly smaller affair than the enormous gatherings seen since its inception in 1994, said the city’s Archbishop.

It is only with a reduced number of participants that “we could manage through special gifts and the like that people would be willing to give to support such a gathering,” Archbishop Charles J. Chaput of Philadelphia told Catholic News Service shortly after Pope Benedict XVI’s announcement.

The Pope announced the host city of the next world meeting at the Seventh World Meeting of Families’ closing Mass to an estimated 1 million people gathered at Milan’s outdoor Bresso Park June 3.

Established by Blessed John Paul II nearly two decades ago, almost every world meeting has attracted hundreds of thousands to 1 million people to each triennial gathering.

“I send my warm greetings to Archbishop Charles Chaput and to the Catholics of that great city, and look forward to meeting them there along with numerous families from all around the world,” the Pope said. He added that, “God willing,” he would take part.

The Pope would be 88 in 2015 and it would mark his second trip to the United States — his first to Philadelphia — as pope.

Archbishop Chaput went on stage to greet the pope, and there they embraced and chatted briefly. The Pope, who chooses the venue for each world families’ meeting, thanked the Archbishop for his willingness to host.

Cardinal Ennio Antonelli, president of the Pontifical Council for the Family, said Philadelphia was chosen as a candidate city because of the current situation in the United States.

Alluding to abortion laws and nationwide legislative efforts to legalize same-sex marriage, the cardinal said promoting traditional marriage “has become necessary because of the great challenges and the resulting difficulties arising from customs and ideologies that seem to be standing out in this historic moment” in the United States.

“There are many pro-life associations that carry out important work and dynamic pastoral programs” supporting the family, he told the Vatican newspaper June 5.

The 2015 meeting will be an occasion to help further these efforts and help Catholics defend life and the family on every level, he said.

The survival of the family “used to be taken for granted. Now things have changed. Our commitment must be at cultural and juridical level, but we also have to support family associations: Developments don’t take place on their own,” he said.

The former archbishop of Denver, who has been leading the Philadelphia Archdiocese since September, said the event will be “a blessing for us.”

“It’s really a great opportunity for us to preach the Gospel and celebrate the gifts of our families and marriage,” he said.

“Philadelphia is in the midst of a very difficult time and I hope that (the 2015 meeting) will be a way of celebrating our commitment to be a church of the new evangelization that looks forward to the future with confidence and joy,” he said.

The Pope’s announcement came the week after the Archdiocese released what the Archbishop had called a “sobering” report of its financial situation, which included a $12.3 million operating loss for the last fiscal year.

The financial viability of parishes is “unclear,” dozens of Catholic schools are set to close or merge and it faces multimillion-dollar legal costs with the Archdiocese’s response to a trial underway investigating how the Archdiocese dealt with sex-abuse cases over several decades.

Archbishop Chaput said he was contacted six weeks ago by the Pontifical Council for the Family and told it had picked Philadelphia as one of three possible cities for the next world gathering.

The council wanted to know if the Archbishop would be willing to host before it sent the candidate cities’ names on to the Pope for the final selection.

Archbishop Chaput said he spelled out very clearly to the council the Archdiocese’s financial struggles, saying it could only host a significantly limited gathering.

Despite the limitations, the Pope “still decided to come to Philadelphia knowing that it would probably be a different scale of celebration than they’ve been used to.”

Cardinal Antonelli said the reduced size would not be a problem since the main aim is to “invigorate pastoral care of families in the United States and greater confidence in American Catholics.”

The meeting in Milan was the Archbishop’s first World Meeting of Families and he said he was moved by families’ personal testimonies and very impressed with the same kind of joy and enthusiasm seen at World Youth Days, which he has actively attended for years.

The world family gathering is not so well known or understood in the United States, he said, and hosting the event will be a great way to positively promote the Catholic understanding of marriage and family in a very public way during a time when marriage is undergoing legal redefinition and the family is facing ongoing challenges.

When asked whether a public event like the family meeting will be a lightning rod for protest over the church’s handling of child abuse by clergy or be an opportunity for further healing, Archbishop Chaput said the question of abuse “always has to be handled in a constructive way and we should never get tired of apologizing for sins and trying to do good.”

He said he did not know why the Pope chose Philadelphia, but said the choice represented “the Holy Father blessing us” with a unique opportunity to boost Catholics’ spirits and re-energize their efforts and commitment to living and spreading the Gospel.

It would also be an important way for families to share their experiences and insight, he said, adding he hoped to be able to replicate in Philadelphia the same kind of energy and enthusiasm he saw in Milan.

“I am so grateful to the Holy Father that he has chosen Philadelphia and excited that we will host the 2015 World Meeting of Families,” Archbishop Chaput said. “It’s fitting that this gathering, which celebrates the cornerstone of society, will take place in America’s cradle of freedom. The Holy Father’s choice is a gift to the local Church in Philadelphia and to the whole nation.”

The World Meeting of Families, which celebrates and aims to help families live their Christian vocation, is organized by the Pontifical Council for the Family.