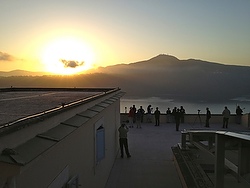 An international group of students observe the transit of Venus at sunrise from the roof of the papal summer villa in Castel Gandolfo, Italy, June 6. The students attending a Vatican Observatory summer school watched the rare occurrence of the planet Venus crossing the face of the sun. (CNS photo/Jesuit Brother Guy Consolmagno, Specola Vaticana)

VATICAN CITY (CNS) — An international group of astronomy students watched Venus’ passage across the face of the sun from the roof of the papal summer villa in Castel Gandolfo.

“It was a special thrill to be able to see it from the pope’s palace,” said Giannina Dalle Mese Zavala, a student from Mexico.

“We were lucky to just be in the right place at the right time,” Zara Randriamanakoto, a student from Madagascar, said in an article published in the Vatican newspaper L’Osservatore Romano, June 6, the day of the transit.

The two women were part of a monthlong summer school sponsored by the Vatican Observatory. The summer program, held every two years, accepts about 25 promising students, mostly from developing nations, who specialize in astronomical sciences.

The observatory’s June 3-29 summer school program on the evolution of star clusters coincided with the rare transit of Venus.

The Vatican newspaper article said the students and faculty were up on the roof of the papal palace at 5:30 a.m., with their telescopes and binoculars specially fitted with solar filters to track the planet’s movement across the sun.

The observatory’s own solar telescope, located in the papal palace, was connected to a brand new digital imaging camera that gave students an up-close view of the transit, the article said.

Transits are when a planet passes between the Earth and the sun, and “Venus transits are remarkably rare events” occurring in pairs, eight years apart, it said.

Vatican astronomers hosted a viewing of the last Venus transit in 2004 for U.S. and Canadian astronomers because the sun was not up in time for the entire event in the United States and Canada, while Italy was in a prime location to view the entire six-hour crossing.

In 2012, Italy saw just the last phase of the crossing.

The next transit of Venus won’t occur until 2117.

Transits were important events for early astronomers because they gave observers a way to measure astronomical distances by helping them compute an “astronomical unit,” that is, the mean distance between the Earth and the sun, the Vatican newspaper said.

With that information, early scientists could get a sense of how far away nearby planets and stars were and how big the universe might be, the article said.

Transits are important today for helping astronomers discover the presence of planets orbiting other stars, it said.

“When a transit occurs, the planet blocks a small amount of light from the star, which thus appears slightly dimmed.”

When researchers note a star portraying a similar phenomenon of faint dimming, it signals the possibility of there being planets in that solar system, it said.

PREVIOUS: Philadelphia Archdiocese to host 2015 meeting that Pope may attend