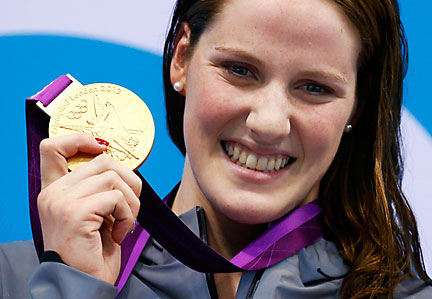 Missy Franklin of the U.S. poses with her gold medal after winning the women's 100 backstroke final at the London 2012 Olympic Games at the Aquatics Center July 30. Franklin is a senior at Regis Jesuit High School in Aurora, Colo. (CNS photo/David Gray, Reuters)

DENVER (CNS) — For swimmer Missy Franklin, a rising senior at Regis Jesuit High School in Aurora, “there is nothing like wearing a cap with my country’s flag on it.”

“I always remember, though, that I’m not just representing the U.S. but also my family, friends, team, school and Colorado!”

She made those comments early this year in a Q-and-A interview with the Denver Catholic Register, newspaper of the Denver Archdiocese.

That was before she earned a spot on the U.S. women’s Olympic swimming team, before she was a gold medalist.

It would be an understatement to say a lot has happened to the 6-foot-1 swimmer since then. Franklin, 17, the youngest member of the women’s swimming team, had won two gold medals and a bronze medal by Aug. 2 and was expected to win more medals before the end of the 2012 Olympics Aug. 12.

After her spectacular win, Washington Post reporter Janice D’Arcy called her “one of America’s new sweethearts” and said the teen “is rewriting the Olympic script” with the way she and her family have approached her training. Unlike so many athletes, Franklin has stayed with the same coach she has had since childhood and has remained part of her same swim club all these years, according to D’Arcy.

When it comes to her high school teammates at Regis, Franklin told the Register: “I love swimming with my Regis Jesuit sisters. I’m so proud of each and every one of them. Nick Frasersmith, my high school coach; and Todd Schmitz, my club coach, worked together so I could fit high school swimming into my training.”

Franklin started swimming competitively when she was 5 years old.

Asked how she has stayed grounded with all her success and the attention it has brought, Franklin said: “I have the best friends and family in the whole world.”

“I love being with them and having fun. My friends and I do all the usual high school activities including going to dances, out to see movies, and shopping,” she said.

At home, she and her parents, Richard and D.A. Franklin, “don’t talk about swimming, but enjoy just being together,” she said. The Franklin household includes Ruger, an 8-year-old Alaskan Malamute.

“We support each other and enjoy great family moments such as cuddling on the couch, in front of the fire, watching ‘The Sound of Music,'” she told the Register. “I have the best support system in the world.”

Franklin is not a Catholic, but she said life as a student at a Jesuit-run high school has her considering joining the church.

“My experiences at Regis Jesuit have absolutely impacted my spiritual life, in so many ways. I am considering converting to Catholicism; I’m currently Protestant,” she said.

“Going into Regis Jesuit, my faith was not a very big aspect of my life. Taking my first theology classes, going to my first Masses, going on my first retreats, I began to realize how important God is in my life and how much I love him and need him,” she continued.

Franklin said her relationship with God grew a lot in her first three years at the school. “I am very happy with where I am with him right now, although there is a lot of more work to do,” she added.

Her junior year really affected her. “I have had two of the best experiences of my life,” she said, referring to the annual Kairos retreat for juniors she attended and her participation in a two-week service project.

“Both of these changed my life,” Franklin said. “I am so thankful for Regis Jesuit, for they have brought God and so much meaning into my life.”

Filby is a reporter at the Denver Catholic Register, newspaper of the Denver Archdiocese.