WASHINGTON (CNS) — A majority of Catholics say they share the U.S. bishops’ concerns about the federal contraceptive mandate and other government restrictions on religious liberty, and the percentage of Catholics who say they are satisfied with the bishops’ leadership has increased sharply in the past 10 years.

Catholics who attend Mass more frequently are more likely to agree with bishops’ concerns on social issues, and those who attend less frequently show less support for their views on issues such as abortion and same-sex marriage. 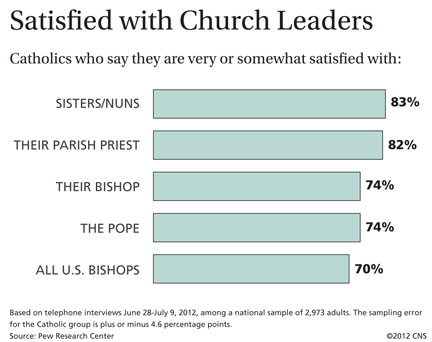 The survey results also gave high marks to Catholic leadership. Eighty-three percent of Catholics expressed satisfaction with women religious; 82 percent, with their own parish priests, 74 percent, with their diocesan bishop and the pope; and 70 percent, with U.S. bishops in general — a significantly higher figure than a decade ago when the satisfaction rate for bishops was 51 percent at the height of the abuse scandal.

White Catholics who attend Mass frequently are more satisfied with the leadership provided by the pope, bishops and parish priests than are those who attend less frequently.

Those surveyed who said they were former Catholics are much less satisfied with Catholic leadership, rating their satisfaction level at 31 percent for U.S. bishops; 38 percent for the pope; and 55 percent for women religious.

According to the survey results, neither Obama nor Romney has established a consistent lead among Catholic voters. Currently, 51 percent of Catholic registered voters said they support or favor Obama, while 42 percent said they support or favor Romney. Among all registered voters, 50 percent favor Obama, while 43 percent back Romney.

The Pew survey was conducted by phone June 28-July 9 with 2,973 adults, including 619 Catholics. It had an overall margin of error of plus or minus 2.1 percentage points.