Cardinal Dolan traces historic role of religious freedom in US 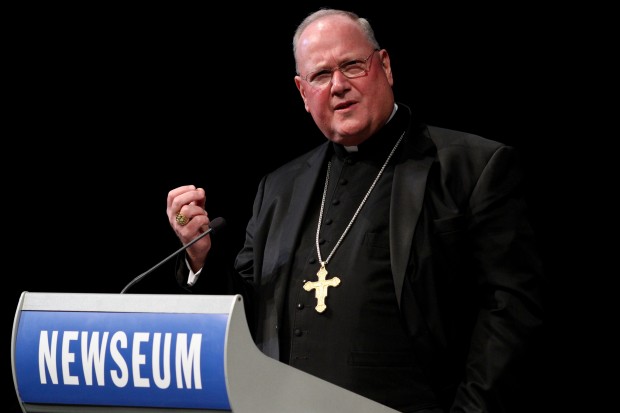 New York Cardinal Timothy M. Dolan speaks to an audience of John Carroll Society members Sept. 10 in Washington at the Newseum, a museum of news. Cardinal Dolan traced the historic origins of U.S. religious freedom in light of a current battle with the government over those rights. (CNS photo/Christopher Newkumet)

WASHINGTON (CNS) — To the enthusiastic reception of an audience of John Carroll Society members Sept. 10, New York Cardinal Timothy M. Dolan traced the historic origins of U.S. religious freedom in light of a current battle with the government over those rights.

Saying that he wanted to “restore the luster” on “this first and most cherished freedom,” Cardinal Dolan, who also is president of the U.S. Conference of Catholic Bishops, said he was afraid “that the promotion and protection of religious liberty is becoming caricatured as some narrow, hyper-defensive, far-right, self-serving cause.”

Rather, he said, “freedom of religion has been the driving force of almost every enlightened, unshackling, noble cause in American history.”

This year, the U.S. bishops have waged a campaign to draw attention to what they describe as “religious liberty under attack” through a variety of governmental policies and societal trends.

Chief among the issues they have cited is a mandate from the Department of Health and Human Services that employers provide insurance coverage for contraceptives, including some that can induce an abortion, and sterilization. The USCCB and other religious organizations say an exemption to the mandate for religious employers that consider such services morally objectionable is too narrow.

Other concerns highlighted by the USCCB’s summer “Fortnight for Freedom” events included court rulings and policies — such as allowing adoption by same-sex couples — that have pushed Catholic institutions out of adoption, foster care and refugee services. They also cited threats abroad, including attacks on churches in Iraq, Nigeria and Kenya.

Cardinal Dolan, who holds a doctorate in American church history, said a historical perspective can help explain that the defense of religious freedom “is not some evangelical Christian polemic, or wily strategy of discredited Catholic bishops, but the quintessential American cause, the first line in the defense of and protection of human rights.”

Speaking in Washington to a standing-room-only audience at a 450-seat theater in the Newseum, Cardinal Dolan noted that religious freedom has always been understood in the United States as one of the fundamental freedoms, “spheres of free thought and action essential to individual liberty and a civil society.” A 74-foot marble display outside the entrance of the Newseum, a museum of news, enshrines the five freedoms of the First Amendment: religion, press, speech, assembly and petition.

In pressing for religious rights, Cardinal Dolan said: “We citizens of any and all faiths, or none at all, are not just paranoid and self-serving in defending what we hoard as ‘ours,’ but we are, in fact, protecting America. We act not as sectarians, but as responsible citizens. We act on behalf of the truth about the human person.”

He ran through a list of historic events, from the American Revolution through the abolition, temperance, civil rights and peace movements, citing them as campaigns whose leaders were acting out of religious convictions.

Among secular leaders who recognized the importance of religious freedom, Cardinal Dolan quoted Thomas Jefferson: “Can the liberties of a nation be thought secure when we have removed their only firm basis, a conviction in the minds of the people that these liberties are of the gift of God?” and Alexis de Tocqueville: “Despotism may govern without faith, but liberty cannot. Religion … is more needed in democratic republics than in any others.”

In nearby Maryland, Cardinal Dolan said, Catholic leaders were an important part of the founding of the nation, including John Carroll, the first bishop of Baltimore and founder of Georgetown University, and his cousin, Charles, the only Catholic to sign the Declaration of Independence.

Maryland was itself established as a place of religious diversity and freedom and was the only colony with “a notable Catholic population,” and one which “provided the laboratory” for religious freedom, he said.

“Your ancestors here were shrewd,” he said. “They did not want any favored status for either their beloved Catholic faith or any other religion. Nor did they want their faith, however normative in their own life, to have any institutional input in the colonial government. Mainly, they just wanted to be left alone. Left alone … to practice their faith, and follow their properly formed consciences in the public square.”

The cardinal spent little time describing the current specific concerns, making note only of a trend toward secularism overwhelming religious voices in the public square and the “direct intrusion of the government into the very definition of a church’s minister, ministries, message and meaning.”

He said the “wide ecumenical and interreligious outrage over the HHS mandate is not about its coverage of chemical contraceptives and abortion-inducing drugs — in spite of the well-oiled mantra from our opponents — but upon the raw presumption of a bureau of the federal government to define a church’s minister, ministry, message, and meaning.”

PREVIOUS: Need for US immigration reform at a ‘critical moment,’ say speakers