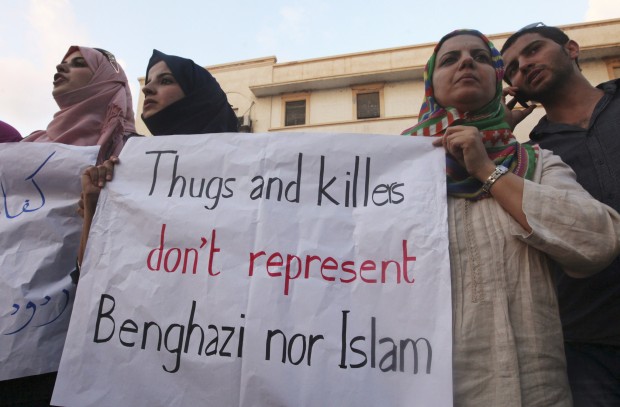 Demonstrators hold signs during a rally Sept. 12 in Benghazi, Libya, to condemn the killers of J. Christopher Stevens, U.S. ambassador to Libya, and the attack on the U.S. consulate in the city. Religious leaders from across the spectrum were quick to condemn the hate message of an anti-Islam film and the violent attack on the consulate it supposedly provoked Sept. 11 in which the Stevens, three other Americans and several Libyan soldiers were killed. (CNS photo/Esam Al-Fetori, Reuters)

WASHINGTON (CNS) — Religious leaders from across the spectrum were quick to condemn the hate message of an anti-Islam film and the violent attack it supposedly provoked Sept. 11 in which the U.S. ambassador to Libya, three other Americans and several Libyan soldiers were killed in the consulate in Benghazi, Libya.

Such eruptions of violence supposedly in the name of religion “are a clarion call for people of faith to work together toward mutual understanding,” said Bishop Gerald F. Kicanas of Tucson, Ariz., chairman of the board of Catholic Relief Services, the U.S. bishops’ overseas relief and development agency.

Ambassador J. Christopher Stevens, 52, and the others were killed inside the consulate, reportedly while trying to arrange for the building to be evacuated as protesters armed with guns and rocket-propelled grenades swarmed the compound.

It was the second assault by a mob on a U.S. diplomatic post that day. Earlier, hundreds of people earlier swarmed the embassy in Cairo, pulling down the American flag and replacing it with an Islamic banner.

Bishop Kicanas, who traveled to the Middle East recently in his capacity with CRS, told Catholic News Service Sept. 12 that such situations are reminders that “we need to understand what faith groups hold dear,” and that violence in the name of faith is not in keeping with the teachings of Islam, Christianity or other religions.

At a news conference the same day at which Muslim, Jewish and Christian representatives decried both the killings and the film, the Rev. C. Welton Gaddy, president of the Interfaith Alliance said: “Violence cannot be the basis for dialogue between the U.S. and the Arab world, and improved relations will be difficult until that is understood. At the same time, the anti-Muslim bigotry that has become all too pervasive in the United States is only amplified when it reaches the rest of the world and runs the risk of being perceived as the view of all Americans.”

Rev. Gaddy, a Baptist minister, said he was “embarrassed and ashamed that the Christian faith has been associated with an act as hateful as the release of a film intended to incite violence.”

“I assure the Muslim world that religion that promotes violence is something else parading as religion,” he said.

Stevens, who had been in the post just since May, was hailed by Libyans, his colleagues in the State Department and others who knew of his long work in the Middle East as a kind man, devoted to the peaceful transition to democracy in Libya.

Libyan Ambassador to the United States Ali Suleiman Aujali described Stevens as a good friend, a tennis partner and regular guest in his home, and cautioned that he might start to cry if pressed to describe his friend further.

Speaking with the array of religious leaders at the National Press Club in Washington, Aujali called Stevens’ death “a great loss for us,” and offered his condolences to the ambassador’s family and to the American people. Stevens was “the right man in the right position at the right time,” he said.

He said Libya would accept the help of other nations in tracking down the people responsible for the deaths and bringing them to justice.

Bacile told The Associated Press that his film, “Innocence of Muslims,” was financed by Israeli investors. The two-hour, $5 million film, which ridicules the prophet Mohammed, has been shown just once, in a nearly empty theater in Hollywood, according to AP. A 14-minute trailer about it and a version translated into Arabic have been posted on the Internet, AP said.

U.S. and Libyan investigators were looking into whether the film protests were used as cover for attacks by other organizations.

“Some have sought to justify this vicious behavior, along with the protest that took place at our embassy in Cairo yesterday, as a response to inflammatory material posted on the Internet,” said Clinton in a press briefing at the State Department. “America’s commitment to religious tolerance goes back to the very beginning of our nation. But let me be clear — there is no justification for this, none. Violence like this is no way to honor religion or faith. And as long as there are those who would take innocent life in the name of God, the world will never know a true and lasting peace.”

In a later appearance at the White House Rose Garden with Clinton, Obama said: “We reject all efforts to denigrate the religious beliefs of others, but there is absolutely no justification to this type of senseless violence. None. The world must stand together to unequivocally reject these brutal acts.”

A statement from Cardinal Timothy M. Dolan of New York, president of the USCCB, said the events point to what is at stake in the worldwide struggle for religious freedom.

“We need to be respectful of other religious traditions at the same time that we unequivocally proclaim that violence in the name of religion is wrong,” said Cardinal Dolan.

At the interfaith news conference, Imam Mohamad Magid, president of the Islamic Society of North America, said his organization unequivocally condemns the killings and the violent reaction to the film.

“Although we believe that this video is hateful and bigoted, this could never be an excuse to commit any acts of violence whatsoever.” He said “no one should fall into the trap of those who wish to incite anger.”

Rabbi David Saperstein, director of the Religious Action Center of Reform Judaism, said the “denigration of religion and religious figures and the intentional framing of religious texts and tenets in this manner must be repudiated by all religious leaders.”

Rabbi Saperstein and others at the briefing emphasized “the video and the views it espouses do not reflect the views of American people of faith. It is, purely and simply, a creation of those on the fringes of American society.”

NEXT: Missouri Legislature overrides veto of bill on HHS mandate