Cardinal encourages Catholics to help transform world with their faith 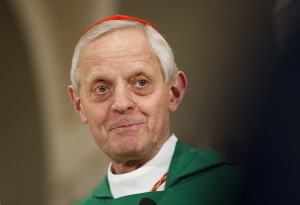 Cardinal Donald W. Wuerl in his latest pastoral letter to Catholics in the Washington Archdiocese encouraged them to help transform the world with their faith. His pastoral, "The Church, Our Spiritual Home," was released before the start of the October Synod of Bishops on the new evangelization, at which he will serve as recording secretary. Cardinal Wuerl is pictured in a Jan. 22, 2012, file photo. (CNS photo/Nancy Phelan Wiechec)

WASHINGTON (CNS) — In a new pastoral letter, Washington Cardinal Donald W. Wuerl offers an overview of what the Catholic Church is, so Catholics can better understand their role in it, and he encourages them to help transform the world with their faith.

“The family of God is called his church. Its members, those baptized into the church, you and I, form a body with Christ as its head. In order to truly know Christ, one must know him in his body, the church,” Cardinal Wuerl wrote.

Issued in mid-September, his pastoral was addressed to the clergy, religious and laity of the archdiocese. It is titled “The Church, Our Spiritual Home.”

The pastoral comes at a time, he noted, when the universal church is taking up Pope Benedict XVI’s call for the new evangelization and Catholics are encouraged to deepen their own faith and reintroduce the Gospel to those who may have drifted away from the faith or never heard the good news of Jesus.

On Oct. 7, the pope will convene the world Synod of Bishops on the “New Evangelization for the Transmission of the Christian Faith.” The Year of Faith opens Oct. 11, which is also the 50th anniversary of the beginning of the Second Vatican Council.

Cardinal Wuerl, who was appointed by Pope Benedict to serve as the synod’s recording secretary, noted in is pastoral that the Washington Archdiocese is preparing for its own synod in 2014, and Catholics will offer input on the local church’s future pastoral direction.

“We can only move forward if we fully understand who we are as members” of the Catholic Church,” he said. “The Catholic Church is the continuing presence of Jesus Christ in the world — in our day and time.”

To better understand what the Catholic Church is, Cardinal Wuerl pointed out several things it is not.

It is “not a man-made organization,” the cardinal wrote, because its “origins are found in the will of Christ. … To ensure that each subsequent generation would have the opportunity to hear of his kingdom, to know his Gospel and to receive his invitation to follow him, Jesus established his church on the foundation rock — St. Peter.”

It is “not a club made up of like-minded people,” nor is it a political party, he continued. “The church has an identity, purpose and teaching that transcends and defies reduction to any specific political philosophy or party. … It presents the received teaching of Jesus that comes to us from the apostles.”

“The church is not an expression or manifestation of current popular or cultural conditioning,” Cardinal Wuerl said. “As significant as are political correctness, peer pressure and cultural influence, the Catholic Church does not draw its inspiration from these, but rather from the word of God as it has been faithfully passed on over 20 centuries within the church.”

The Catholic Church “is the enduring, visible yet spiritual, structured yet Spirit-led, human yet divine presence of Christ in the world today. The new body of Christ teaches in his name, sanctifies with his grace and leads with his authority. … Being a member of the church incorporates us into something beyond us — greater than ourselves.”

“We live 20 centuries after his Resurrection and Ascension, so Jesus established his church, choosing apostles to carry on his work and founding it on St. Peter, the rock,” the cardinal wrote.

“What brings that revelation down to our generation is the apostolic tradition. Through the apostolic succession, the saving story of what Jesus said and did is passed on, under the inspiration of the Holy Spirit, in a way that guarantees that it is not forgotten, misunderstood or lost from age to age and generation to generation.”

The Catholic Church, he said, helps lead people to Jesus and ultimately, to heaven: “We do not belong to the church to set within it our own path to salvation. We are members of the church because we want to be shaped by its teaching and gift of grace.”

Cardinal Wuerl said it is wrong to doubt the truth of church teaching because of failures of anyone within the church, such as the sexual abuse scandal.

“It is inevitable — though no less deserving of our repentance – that we will sin. Our moral failings must not cloud our belief in the truth of Christ’s teachings. And believing in that truth, we must not fail to proclaim it,” he said.

“The mystery of the divine and human quality of the church does not expect every Catholic always to be perfect. We do not lose faith over the failure of a priest, bishop or religious. … With all its human imperfections the church continues to be the means established by Christ to be his presence and carry on his mission.”

Noting that some Catholic individuals and groups present views at odds with church teaching as “Catholic,” the cardinal encouraged people to look to the Catechism of the Catholic Church to verify what is authentic Catholic teaching.

Perhaps “the most powerful expression of the church is that of the body of Christ,” he said. “The body of Christ is one. The faithful are the members of the living body alive in the Holy Spirit.”

In the pastoral, Cardinal Wuerl praised the witness and ministry of the many groups that make up the church:

— The laity, who are called to be witnesses to the world, not bystanders, and must apply God’s word “to every aspect of life,” including in “defense of human life, marriage and family; care of the sick and those in need, and the development of a more just distribution of the goods of the earth and care for all of creation.”

— Priests, who are “configured to Christ in a unique and special way.” They are “responsible for the spiritual and pastoral care of the people entrusted to them, the celebration of the Eucharist, the administration of the sacraments, the preaching of the word and the direction of the ordinary business of the parish.”

— Deacons, who through their lives of service are in a special way “configured to Christ the servant.”

— Religious communities, especially women religious, who have had an important role in developing educational, health care and social service networks in the United States. “Christ’s invitation to close discipleship endures in the church in a special way in the religious life.”

— Bishops, who continue the work of the Apostles, whom Christ charged “to lead, to teach and to sanctify his flock entrusted to them.”

He also discussed the important role of theologians, saying that “theological examination, questioning, interpretation and testing the limits of Catholic teaching have their purpose, but also their own limits, which sometimes the teaching office of the church — the bishops — need to assert.”

Cardinal Wuerl encouraged Catholics to be agents of the new evangelization, to deepen their understanding and love for their faith and to have the confidence to share it with others.

PREVIOUS: Cardinal Egan, at UN service, says communications can be tool of peace