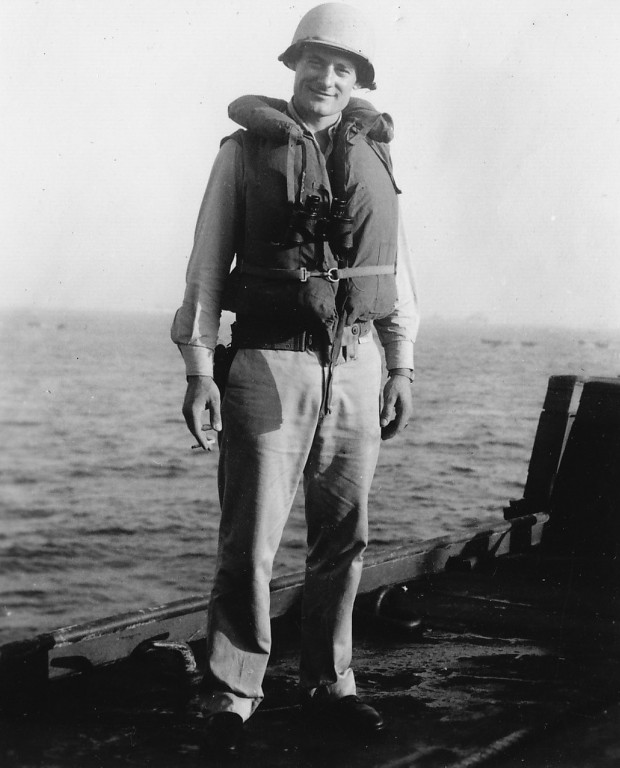 Joseph P. Vaghi Jr., the U.S. Navy's youngest beachmaster at Omaha Beach in Normandy during the June 6, 1944, D-Day invasion, died at a Maryland retirement home Aug. 25 at age 92. He is pictured in an undated photo. (CNS photo/courtesy Vaghi family)

BETHESDA, Md. (CNS) — At 23, Joseph P. Vaghi Jr. was the Navy’s youngest beachmaster at Omaha Beach in Normandy during the June 6, 1944, D-Day invasion, a role he likened to being a “traffic cop,” as he held a map and guided troops ashore, through minefields, mortar blasts and machine-gun fire.

Earlier this year at the age of 91, Vaghi received the Legion of Honor Chevalier from the French government, France’s highest civilian honor, in thanks for his heroic contribution to that country’s liberation during World War II.

On Aug. 25, the feast day of St. Louis of France, a day when the French celebrate the liberation of Paris, Vaghi died at a Bethesda retirement home. A retired architect known for his devotion to his Catholic faith and his family, Vaghi was 92.

At the beginning of the Aug. 30 funeral Mass for Vaghi at the Church of the Little Flower in Bethesda, one of his four sons, Msgr. Peter Vaghi, that parish’s pastor, placed a cross on his father’s casket that had been carved by his dad’s own father, an Italian immigrant and cabinet maker who stared his own woodworking business in Bethel, Conn.

In his homily, Msgr. Vaghi noted, “The Catholic faith was infused into his family by the example of his immigrant parents.”

In a 2004 interview with the Catholic Standard, Washington archdiocesan newspaper, Vaghi said that when he went into Normandy, “I had absolutely no fear, because I knew God would look after me. If he wanted me, that would be it.”

At Normandy, Vaghi ran to a burning Jeep and pulled away gasoline cans and boxes of hand grenades to prevent them from exploding and possibly killing the wounded soldiers on the beach. He later earned the Bronze Star for his heroism there, and was featured in the Ken Burns’ documentary, “The War.” Vaghi also took part in a second D-Day, the Easter Sunday, 1945, invasion of Okinawa, Japan.

“I truly believe that my dad died in Christ, because he lived in Christ,” Msgr. Vaghi said in his homily. He noted that his father attended daily Mass, and he expressed his faith and love for God by how he treated his family and those with whom he worked in his architectural firm. “He was a perfect Christian gentleman.”

In 1959, Joseph Vaghi Jr. retired from the Naval Reserve with the rank of lieutenant commander. After the war, he earned a degree from the School of Architecture at The Catholic University of America. He later started his own architectural firm and designed and built a home for his growing family in Kensington.

After Vaghi’s death, Italy’s minister of foreign affairs, Giulio Terzi, praised him for his heroics at Normandy, but also for “the courage, coherence and great sense of humanity which he upheld throughout his life. … Joseph P. Vaghi is a model for Italians living throughout the world. His passing is a great loss for all of them, and for Italy.”

In addition to his four sons, Vaghi was survived by six grandchildren and two sisters. His wife of 57 years, Agnes, died in 2004.

PREVIOUS: Bishop Finn convicted on one charge of failure to report abuse

NEXT: Ukrainian Catholic bishops discuss next steps in vibrant-parish plan