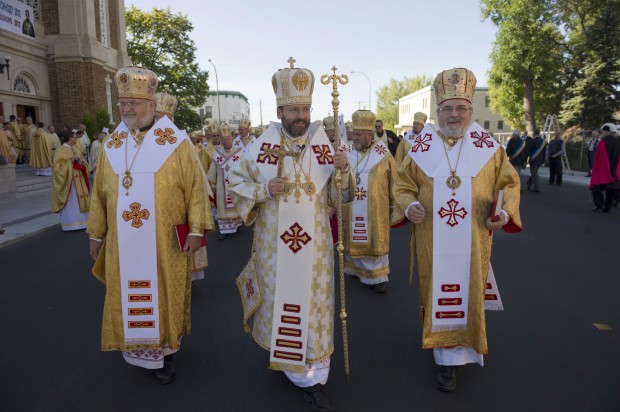 WINNIPEG, Manitoba (CNS) — Ukrainian Catholic bishops from around the world gathered in Canada to discuss how to make their parishes more vibrant — especially through the involvement of laypeople.

How they do that requires solutions as varied as the parishes that represent more than 4 million Ukrainian Catholics on four continents.

“We have parishes that are growing” and need pastoral, financial and structural support, said Canadian Bishop Ken Nowakowski of New Westminster, who heads the Ukrainian Catholic Church’s implementation team for its strategic plan, “Vision 2020.”

Some urban parishes have an aging population and declining numbers, and synod members must decide how to support the parish priest who spends so much time visiting the sick and officiating at funerals, said Bishop Nowakowski. At the other end of the spectrum, the bishops must consider how to help keep priests in busy, large parishes from burning out.

The vibrant parish initiative was approved by the synod in 2011 when the bishops met in Brazil. Their first steps have included making sure that clergy understand the plan and representatives of each of the Ukrainian Catholic eparchies, or dioceses, designated a priest-representative to help introduce the plan within the diocese.

Archbishop Stefan Soroka of Philadelphia said that, at least as far as he had heard, “the workshops for the priests worked out very well; they were very positive.”

“This whole Vision 2020 has helped us focus on goals … what are we going to try to achieve for now?” he added.

Bishop Nowakowski said that about 70 percent of the world’s 4,500 Ukrainian Catholic priests have given feedback and are involved with the plan. This year Church leaders hope to involve religious communities and monastics, he said.

He told Catholic News Service he would present synod members with a report on what has been accomplished and would include feedback. Synod members will either ask the committee to continue with its current plan or make changes, he added.

The Synod of Bishops, the Ukrainian Catholic Church’s governing body, normally meets in Ukraine, but it is meeting in Canada Sept. 9-16 in honor of the centenary of the arrival of Canada’s first Ukrainian Catholic bishop, Blessed Nykyta Budka.

Winnipeg’s Ukrainian Archbishop Lawrence Huculak said as bishops from other countries arrived for the synod, they were impressed with the involvement of Canada’s laity. Even the synod’s organizational committee has laypeople on it, he said.

“It’s not just the bishops … the people are taking part and helping to organize it,” he said.

Ukrainian Catholics in Canada have women’s, men’s and youth groups. Lay groups have national conventions, elect leaders and participate in the life of the Church.

“Although we (Canadians) may take it for granted, our laity have not been able to organize themselves in the same way” in some other countries, he said.

Last December, the head of the Ukrainian Catholic Church, Archbishop Sviatoslav Shevchuk of Kiev-Halych, Ukraine, outlined his vision in a pastoral letter to Ukrainian Catholics worldwide. In the letter, “The Vibrant Parish — A Place to Encounter the Living Christ,” he spoke of the elements needed to “grow in holiness and unity in Christ Jesus.”

Archbishop Shevchuk said people of all ages must continue to learn about the faith — not only from the Bible, but also from the Catechism of the Catholic Church. Priests must teach and laity have a responsibility to learn because “permanent and continuous formation for various age groups … is an essential component of the vibrant parish.”

Parishioners must participate regularly in the sacraments, and families must once again become “a school of prayer,” he said.

“Our parishes can become places where care is given to the orphan, protection for the widow, help for the poor, and where the suffering of the sick is shared,” he said.

Parishes must have active pastoral and parish councils as well as “well-formed and mature co-workers who assist the priest in leading catechetical schools, church brotherhoods, charitable works, youth organizations and prayer groups,” he said. “One of the most important responsibilities of leadership in the parish community is discerning God’s will and searching for the best ways of implementing it in the life of the parish.”

Everyone in the parish must have a missionary spirit, he said.

Archbishop Soroka told Catholic News Service that in the Philadelphia Archdiocese, he hoped to work through the people in the pews to reach those who are not coming to church.

“Many have lapsed,” he said, adding, “If we don’t reach out to those in the pews today, to whom will we speak when they leave?”

The archbishop said that, by reshuffling some clergy assignments, he has been able to designate 2.5 priest slots for work on outreach to lapsed Catholics, including on social networks like Facebook and Twitter. This fall, he said, they hope to create two short DVDs — one on the Creed and one talking about why people go to church, what gives people a sense of belonging. The DVDs will be distributed to Ukrainian Catholics who attend church in the hopes that they will want to share them with friends and relatives who no longer come to church.

He added they planned to make use of the KISS principle: “Keep It Simple — and Spiritual.”

NEXT: Need for US immigration reform at a ‘critical moment,’ say speakers