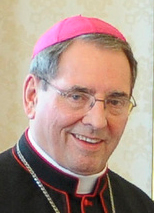 NEWARK, N.J. (CNS) — Marriage is “not created by law or the state because it is “a natural and pre-political institution,” Archbishop John J. Myers of Newark said in a pastoral reflection issued Sept. 25.

“Governments rightly recognize it in law and protect and support it for the sake of the common good,” but “the truth of marriage is … part of the natural law,” Archbishop Myers said in his reflection.

Titled “When Two Become One,” the document discusses the definition, meaning and sanctity of marriage as a union of man and woman.

A news release said the reflection, which “is consistent with the teaching and tradition of the Catholic Church,” was aimed at helping “the faithful of the archdiocese form their consciences, discern their vocations and, for the married, fulfill their vows.”

He also addressed the push for legalization of same-sex marriage and spoke out against the use of contraception in marriage.

“Many young people today have not experienced permanence and faithfulness in the familial relationships around them,” Archbishop Myers wrote. “This impedes their appreciation of the truth about marriage and makes it difficult for them to make serious and permanent commitments which overcome self-regard in favor of the good of others and the common good.”

The pastoral reflection was published in the Sept. 26 issue of The Catholic Advocate, the archdiocesan newspaper.

The archbishop said that although “sexual difference and complementarity” have always been part of God's plan for marriage, “the current state of marriage in our church and in our society often acts as a countersign.”

Responding to claims that equality and justice demand the recognition of same-sex marriages, he said, “This argument might be stronger if the church's opposition were based solely on religious beliefs, and same-sex relationships were equivalent to conjugal partnerships that have historically been denoted by the word 'marriage.' Neither is true.”

He said civil authorities have always recognized the specific sexual nature of marriage and have always limited its recognition in society to a union of man and woman.

“A brother and sister or an uncle and his niece are prohibited everywhere from marrying because of the relationship of marriage to sexual activity and the laws of consanguinity,” Archbishop Myers said. “Everyone, including the state, has a vital interest in ensuring the best possible environment for begetting, rearing and educating the next generation.”

The letter, posted on the archdiocesan website , will be distributed to each of the 30 high schools in the archdiocese for incorporation into the schools' family life curriculum. In addition, clergy in the archdiocese were to read a letter from Archbishop Myers about the pastoral at all Masses during the weekend of Sept. 29-30.

He said those who are “unable to assent to or live the church's teaching in these matters … must in all honesty and humility refrain from receiving holy Communion until they can do so with integrity.”

He also warned that once a society “enshrines in law a 'civil' right to 'marry' someone of one's own sex, then any persons or groups that believe otherwise will be seriously disadvantaged in law and in fact.”

“How long would the state permit churches, schools or parents to teach their children that homosexual activity is contrary to the natural law if homosexual marriage were a civil right?” he asked. “Already in Canada and other democratic nations 'hate speech' laws have been used to harass or even arrest clerics who preach the biblical message about marriage.”

Archbishop Myers noted that the church affirms “the dignity and worth of people with 'deep-seated homosexual tendencies,' commanding that they be 'accepted with respect, compassion and sensitivity'” and condemning any unjust discrimination against them.

“Indeed, it is precisely because of this love and respect for the dignity of every human being that Christ and his church call us to strive for full development as beings created in the image and likeness of God, and to renounce every act unworthy of our exalted status,” he wrote. “As human persons, each has the capacity to exercise sexual capacities on the basis of reasonable judgments and moral values.”

The archbishop said the church does not consider homosexual attraction as “necessarily an impediment even to marriage.”

“Today and throughout history, there are and have been persons who experience same-sex attraction, even strong and predominant same-sex attraction, who also understand marriage and its value and have chosen to be joined to a person of the opposite sex in true matrimony,” he said. “Many such persons have lived good, faithful and even joyous married lives.”