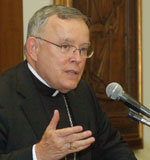 LOS ANGELES (CNS) — In a wide-ranging address at the eighth annual Los Angeles Catholic Prayer Breakfast, Archbishop Charles J. Chaput of Philadelphia spoke of the “debris of failure” that must be dealt with if the Catholic Church in America is to be truly renewed.

“The fact remains that roughly 10 percent of Americans describe themselves as ex-Catholics,” he reported. “If they all joined together in a new 'Church of the Formerly Catholic,' they'd be the second-largest denomination in the country.

“That's our reality as disciples. That's the debris of failure we need to deal with if we want to repair God's house,” he told the crowd of 1,550 at the Cathedral of Our Lady of the Angels' Plaza.

In his Sept. 18 address (see the full speech here), Archbishop Chaput stressed that Pope Benedict XVI had given the church a “road map” of renewal in his Oct. 17, 2011, apostolic letter “Porta Fidei” (“The Door of Faith”).

In it, the pope announced the upcoming Year of Faith, which begins Oct. 11, the 50th anniversary of the opening of the Second Vatican Council, and ends Nov. 24, 2013, the solemnity of Christ the King. The special year will be highlighted with a worldwide program of worship, catechesis and evangelization.

“Morally, we live in chaotic times,” Archbishop Chaput said. “In such a climate, it's very easy for people to develop habits that undermine virtue, character and moral judgment. It's hard to reach a moral consensus when a culture can't agree on even the most basic standards of right and wrong. As a result, for individuals, today's conditions of daily life are often isolating and even frightening.”

Basically, during this period of new evangelization, the pope is asking Catholics to receive a blessing, he said. He's asking members of his flock to examine their hearts and life habits without excuses or alibis.

“If you think that sounds easy or pious,” he said, “try it for a week.”

Then he warned, “If our hearts are cold, if our minds are closed, if our spirits are fat and acquisitive, curled up on a pile of our possessions — possessions that can kill us — then the church in this country will die.

“It's happened before in our times and places, and it can happen here. We can't change the world by ourselves. And we can't reinvent the church. But we can help God change us. We can live our faith with zeal and conviction — and then God will take care of the rest.”

The archbishop said Pope Benedict had some “concrete suggestions” for parishes and church groups in the Year of Faith. First: to study in detail the Apostles' Creed and the catechism. Second: to intensify their witness of charity. And third: to study the history of their faith and, in particular, see how “holiness and sin” are so often woven together.

“The clergy scandal of the past decade has wounded victims and their families, damaged the faith of our laypeople, hurt many good priests and found too many American bishops guilty of failures in leadership that resulted in bitter suffering for innocent persons,” he pointed out. “As a bishop, I repent and apologize for that failure — and I commit myself as zealously as I can to do the work a good bishop must do, which is shepherding and protecting his people.”

NEXT: US Catholics urged to renew commitment ‘to defend’ life during October