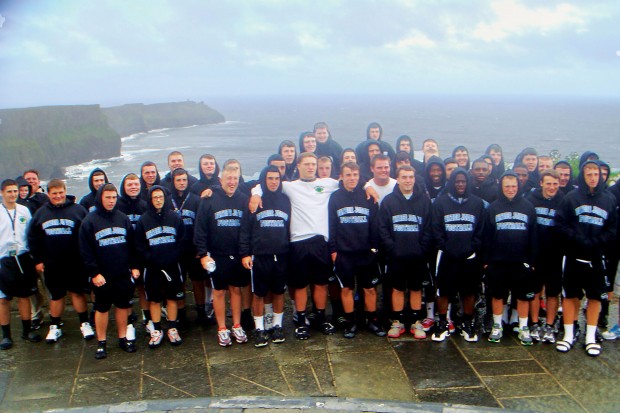 The Father Judge football team drinks in the scenery during their trip to Ireland for a football tournament.

Being thankful is consistent with our Catholic Christian faith.

Sometimes, though, something happens that leaves a person more thankful than usual.

The Crusaders embarked Aug. 29 on an epic 3,000-mile-plus trek to a suburb of Dublin, Ireland. In theory, the main objective was to play a football game, which the Crusaders did, losing to Scottsdale, Arizona’s Notre Dame Preparatory School, 20-6.

However, it was much more than that.

“How many teenagers get to do something like that?” said senior two-way lineman Vince LoStracco. “I couldn’t believe it. It was really something special.”

“It’s something I will never forget,” he said. “It’s a once-in-a-lifetime experience.”

Spatz could have been talking for the entire team, which included 47 players, not to mention a full coaching staff and numerous parents who left Philadelphia’s International Airport on a Wednesday, arrived the same day, and eventually practiced before sporadic touring.

Before the five days were over, Father Judge would spend time gawking at the famous Cliffs of Moher in County Clare, Ireland, about 400 feet above the Atlantic Ocean. The Crusaders would also enjoy team meals, march in a parade with the other 11 high school teams that comprised the Global Ireland Football tournament (GIFT), and witness in person while the University of Notre Dame dismantled Navy, 50-10, in Dublin’s Aviva Stadium on a crisp Saturday afternoon. 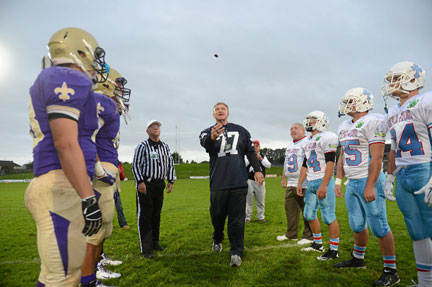 The Crusaders of Father Judge call the coin toss before the start of a game against Scottsdale, Arizona's Notre Dame Prep in Ireland Aug. 31.

On two occasions, the team celebrated Mass, allowing the Crusaders to reflect on, in the words of LoStracco, “how fortunate” the entire program was.

“There was a lot to think about and reflect on,” LoStracco said. “I think everyone was aware that this was an extremely special experience.”

“We did something that no other team at Father Judge had ever done,” said senior lineman Dan Toner, who had never played football before his freshman year. “We were a part of something that brought football to the other side of the world.

“This whole trip brought all of us closer together, and we were already a close team before we went. This was something that none of us will ever, ever forget.”

Nor will they ever forget their mini-celebrity status, implied by the steady swarm of autograph requests from numerous Ireland teen peers.

“That was absolutely amazing,” LoStracco said. “All the Irish kids wanted our jerseys and our spikes. I was never asked to sign an autograph before. I was thinking, ‘Wow! This is what professional athletes get to do every day.’”

LoStracco said he was happy to oblige, but not so for his tangible supplies.

“I only have one pair of spikes,” he said with a chuckle. “Some guys gave people their gloves. It was an experience that was beyond cool.”

For Spatz, this was his first experience in an airplane. He shook away the butterflies and enjoyed the long trip.

“Pretty good time to take my first plane ride,” he said. “We all had a great time.”

Father Judge coach Tommy Coyle acknowledged that it was near impossible to mention all the many people who helped make the trip a reality. 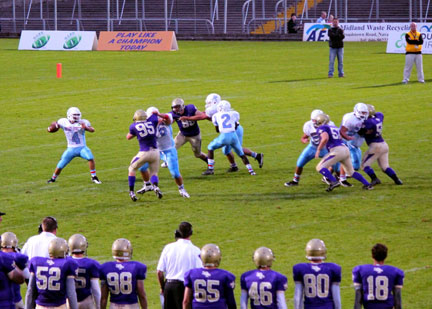 The Crusaders drive down the field in the game they lost to Notre Dame Prep, 20-6.

Among them were extremely generous alumni, the players’ families that needed to raise $2,000 each, the people associated with the aforementioned GIFT and anonymous benefactors who reveled in aiding such a surreal experience.

“We have an incredible community,” Coyle said. “The generosity was overwhelming. So much work – so much planning – goes into something as big as this. But I’m not surprised that Father Judge was able to make it happen. I’m really not.”

Coyle couldn’t help but feel proud when he received several calls from impressed adults a few days after the 80-plus contingent arrived home.

“People (were) saying how our players were gentlemen and how they handled themselves as young adults,” Coyle said. “I wasn’t at all surprised to hear that, but it’s always good to hear nonetheless.”

“All of us wanted to represent Father Judge well and make sure everyone knew we appreciated what so many others had to do to make this happen,” he said.

Which is why a 20-6 football loss was so much more of a victory than defeat.