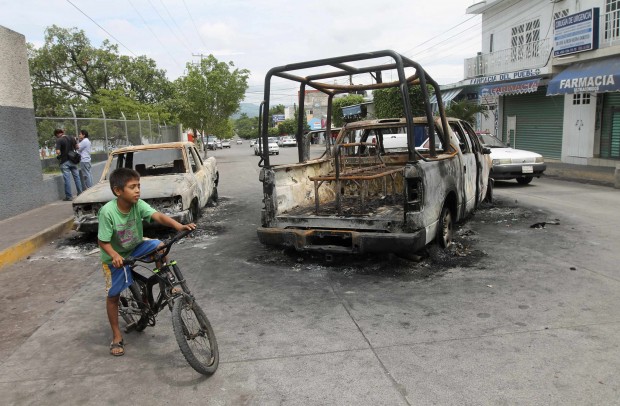 A child rides his bike past two burned vehicles Aug. 12 after five people were killed in gang-related attacks in Nueva Italia, Mexico. About 28 percent of the approximately 100,000 people murdered in Latin America and the Caribbean every year are between ages 10 and 19, according to U.N. figures.(CNS photo/Leovigildo Gonzalez, Reuters)

LIMA, Peru (CNS) — Ask Maykon Quispe what kind of violence he sees in his hometown of Huancavelica, in the Peruvian Andes, and he thinks of the markets, where kids his age or younger haul sacks and crates.

“A lot of kids want to help out their families by earning a little money, but the merchants make them carry too much weight,” the 12-year-old said.

“Children suffer psychologically because of the violence,” she said of her native El Salvador. “There are too many murders in our country. What we want most is peace.”

Family violence kills more than 80,000 children a year in Latin America, and more than 6 million suffer severe abuse, according to U.N. figures. Experts — and even some young people — say those high levels of violence are not surprising in a region that also has the greatest gap between rich and poor.

And the younger the child, the greater the risks.

“Early childhood, from birth to age 5, is silent,” said Father Gaston Garatea, who heads a nonprofit civic group in Peru called Investment in Children. Kids that age “don’t go on strike, don’t protest, don’t set up roadblocks” to call attention to their problems, he said.

“The causes of violence are the same in nearly all countries,” said 18-year-old Sofia Melgarejo of Paraguay. “The main one is poverty, which leads children to work. That’s something we see in many countries. Working children and street children suffer a lot of violence. There is also domestic violence by parents who think they are educating their children by mistreating them physically or verbally.”

Quispe, Salazar and Melgarejo were among about 20 children and teens who participated in a U.N. expert consultation on children and violence in Lima in late August. These young participants and adults — including government officials and representatives of nonprofit organizations that work with children and their mothers — offered a glimpse of the violence that affects children, as well as possible solutions.

The forms of violence range from gang murders to sexual abuse, from corporal punishment in schools to harsh punishment by parents or guardians. Because much of the violence occurs behind closed doors, experts say statistics are unreliable, especially for children under age 3, and that the problem is probably underreported.

The figures that do exist reveal the magnitude of the problem. About 28 percent of the approximately 100,000 people murdered in Latin America and the Caribbean every year are between ages 10 and 19, according to U.N. figures. Some killings are related to organized crime or gangs — an estimated 82,000 young people between ages 13 and 29 belong to gangs in Central America and Mexico — according to the U.S. Agency for International Development.

But while those cases grab the headlines, everyday violence at home and in school often goes undetected and may be more insidious.

A study in Peru in 2011 found that 44 percent of children in three major cities — Lima, the highland city of Huancayo, and Iquitos, in the Amazon region — had suffered violence at home and 28 percent in school. About 27 percent of the children reported having been struck with an object at home, while 6.4 percent suffered serious injury, such as cuts or burns.

The percentage of parents in Cali, Colombia, who said they had struck their children with hard objects was nearly twice the national average. Armed with that and other statistics, Cali Mayor Rodrigo Guerrero put his experience as a physician and epidemiologist to work to understand the problem of violence in his city.

He lengthened the school day, adding recreational and sports activities, spruced up parks, and implemented programs to improve housing and create jobs. The city also has focused on health care and support for pregnant women to help reduce child abuse — which, in turn, helps reduce youth violence, he said.

Although it has little direct impact on his city, the armed conflict in Colombia “has legitimized the use of violence to achieve political ends,” Guerrero told Catholic News Service, adding that, as a result, the violence of drug traffickers “fell on fertile ground.”

Father Garatea said the same was true in Peru, where nearly two decades of political violence left many children in remote parts of the country traumatized.

Increasingly, countries in the region are addressing violence against children through health programs and changes to legislation, but those efforts can be slow.

In Peru in August, the office of the government’s human rights ombudsman criticized changes made to a proposed updating of the Code for Children and Adolescents, after a congressional commission removed specific protection against sexual violence and physical punishment.

The young people at the U.N. consultation called for parents to open lines of communication with their kids instead of resorting to force and urged countries to spend more on children’s programs. Quispe said he hoped to organize workshops for his peers and would like to see “parents’ schools” for adults.

“To work for children is to work for the present, not for the future,” he said, “because children deserve it now.”

NEXT: Link between power, abuse in Church, examined by conference