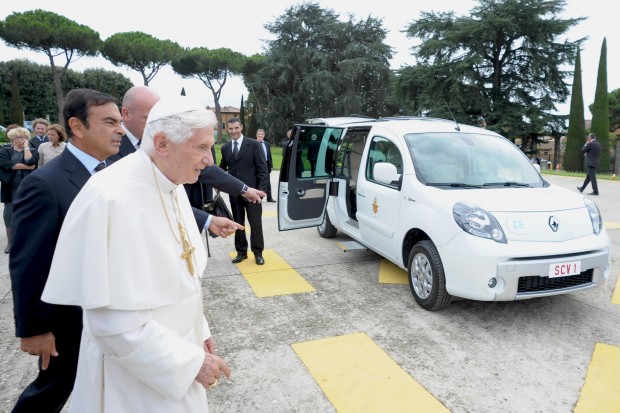 Pope Benedict XVI arrives next to Carlos Ghosn, chairman and CEO of Nissan and Renault, during a presentation of a new Renault electric car at the Vatican Sept. 5. (CNS photo/L'Osservatore Romano via Reuters)

VATICAN CITY (CNS) — Thanks to a French automaker and an Italian utility, Pope Benedict XVI now has a pair of all-electric minivans and a series of recharging stations with which to power them.

At a Vatican press conference the next day, representatives of Renault told reporters the two cars were made specifically for the Vatican.

The white version, with the papal stem on the front doors, was designed for the pope to use, probably at Castel Gandolfo, but Jesuit Father Federico Lombardi, Vatican spokesman, said it also could be used on other occasions when the pope is in the midst of a crowd.

The roof over the back seats opens and the side windows are removable, so it can be used as a popemobile, the Renault representatives said. It also has a retractable step to make it easier to get in and out of the vehicle.

On a full charge, they said, the pope’s car can cover 105 miles. While they did not say how fast the pope’s Kangoo Maxi Z.E. could go, Renault says its unmodified version can reach speeds up to 80 miles an hour.

The second Kangoo Maxi Z.E. given to the pope was designed for the Vatican police force, the “gendarmeria Vaticana.” Painted blue, the minivan has police lights on top and a white-and-gold stripe around the sides.

Pope Benedict, the Italian police who patrol St. Peter’s Square, and the staff of Castel Gandolfo and the Vatican press office already use electric vehicles, which is why the Italian electric company ENEL has installed recharging stations at the Vatican as well as at the summer villa.