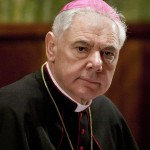 German Archbishop Gerhard L. Muller, the new prefect of the Congregation for the Doctrine of the Faith, in a 2010 file photo.

VATICAN CITY (CNS) — The senior Vatican official with authority for investigating priests accused of sexual abuse said that, in such cases, “always and everywhere the most important concern is for those who have been the victims of this terrible abuse.”

Archbishop Gerhard L. Muller, prefect of the Congregation for the Doctrine of the Faith, said the congregation also has an obligation to ensure that the process of justice does not “become a lynching.”

The archbishop, who was appointed to his office in July, spoke about the doctrinal congregation and its work in an interview with the German service of Vatican Radio. The broadcaster’s English and Italian programs published translated excerpts of the interview Sept. 19.

The German archbishop said he believes he was appointed to the job because he is a theologian and, as a theologian, he will “try to understand what is ailing the church today. In many countries there is a strong polarization: traditionalists against progressives or whatever you would call them.”

A key task of the church, he said, is overcoming those divisions based on a strong common faith in Christ.

“We are not a community of people aligned to a party program, or a community of scientific research; our unity is a gift given to us. We believe in the one church united in Christ. And if you believe in Christ, really believe — not manipulating the teachings of the church, or singling out individual points to support your own personal ideology, but rather unconditionally entrusting yourself to Christ — then the unity of the church is also important,” he said.

Archbishop Muller also was asked about inheriting cases, studies and projects the congregation had begun under his predecessor, U.S. Cardinal William J. Levada, including the congregation-ordered revision of the Leadership Conference of Women Religious, the largest organization of superiors of women’s orders in the United States.

The archbishop would say only that he already knew something about that and other issues before the congregation because he had been a member of the congregation for the past five years while serving as archbishop of Regensburg, Germany. However, he admitted, “I do not have the luxury of taking my time to get acquainted with these issues.”

At the same time, he said, “it is not a completely new start for me” since “as a bishop you find yourself having to tackle these issues,” and many of them also have been long-term theological concerns of his.

PREVIOUS: Encounter with God only answer to suffering and evil, says ethicist

NEXT: Christians, Muslims must give joint witness for peace, pope says