Vatican synod to examine when divided Christians can preach together 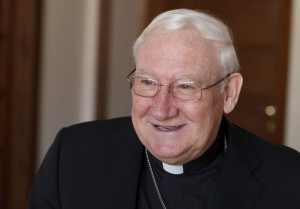 Bishop Brian Farrell, secretary of the Pontifical Council for Promoting Christian Unity: "no church, no religion is an island -- and we need one another and can learn from one another." (CNS photo/Paul Haring)

VATICAN CITY (CNS) — The potential power, but also the limits, of an ecumenical proclamation of the Gospel and defense of Gospel values is likely to be a key topic during October’s world Synod of Bishops on the new evangelization.

The ecumenical focus will be particularly sharp Oct. 10 when — at the personal invitation of Pope Benedict XVI — Anglican Archbishop Rowan Williams of Canterbury will deliver a major address to synod members.

While popes have long invited other Christians to be “fraternal delegates” and make brief speeches at the synods, Pope Benedict has begun a tradition of inviting important religious leaders to deliver a major address. In 2008, Orthodox Ecumenical Patriarch Bartholomew of Constantinople and Chief Rabbi Shear-Yashuv Cohen of Haifa, Israel, addressed the Synod of Bishops on the Bible. Another rabbi and two Muslim leaders gave speeches at the 2010 special synod on the Middle East.

Bishop Brian Farrell, secretary of the Pontifical Council for Promoting Christian Unity, said the invitations demonstrate the pope’s recognition that the “challenges facing religious belief itself and church life are common — no church, no religion is an island — and we need one another and can learn from one another.”

In addition, he said, ecumenical and interreligious cooperation shows the world that “we are together in promoting the values of belief and the moral-ethical values that we stand by.”

Ecumenical cooperation is crucial when trying to transmit the faith in the modern world and to re-propose Christianity in areas, especially Europe and North America, which had a Christian tradition, but are becoming increasingly secularized.

“The mission that the Lord entrusted to the Apostles, to preach the Gospel to the ends of the earth, has not been fulfilled — mostly because of divisions among his followers,” Bishop Farrell said.

The beginnings of the modern ecumenical movement usually are traced to a 1910 conference of missionaries “who had the experience of being seen as preaching against each other instead of preaching Christ,” he said. The missionaries recognized the scandal they were causing as they “exported their divisions” to Asia, Africa and other parts of the world.

The missionaries saw “their work being undermined by their own divisions,” which they increasingly acknowledged were violations of the will of Jesus that his followers be one, the bishop said.

Meanwhile, among some Catholics in the early 1900s, “there were the beginnings of a spiritual interest in the idea of prayer for Christian unity,” he said, but the quantum leap in the Catholic Church’s commitment to ecumenism came with the 1962-65 Second Vatican Council.

Bishop Farrell said the change in the church’s attitude reflected an “education of the bishops at the council, because most of the bishops came with the kind of theology that considered our Protestant brothers and sisters, and the Orthodox to a certain degree, as just outside the church.”

Through discussions and studies at the council, he said, the bishops gained “a new perspective: We have a common faith in Jesus Christ, we have a common baptism, and this is already a huge element of real communion in the faith.”

The ecumenical task, embraced by the Catholic Church, involves prayer and dialogue to move that communion “from imperfect to perfect,” he said.

Until the process is complete, however, there will be some limits to the possibilities for ecumenical cooperation in evangelization, because Catholics, Orthodox, Anglicans and other mainline Christians aren’t just inviting people to profess faith in Jesus Christ, but to live that faith in his body, the church.

“There is a kind of superficial ecumenism that says, ‘it doesn’t matter what church you belong to,'” Bishop Farrell said, but the Catholic Church and most of its dialogue partners reject that view.

Because Christians aren’t passing on “some Gospel of their own making,” but a faith they have received, “sharing one’s faith means sharing one’s belonging to a particular community that has given me that faith. It means sharing the conviction, in conscience, that the Gospel comes to me in its fullness in this particular community,” the bishop said.

The role of the church and, in fact, the definition of what it means to be fully church is at the heart of the ongoing, sometimes difficult, theological ecumenical dialogues, he said.

For the Catholic Church, Bishop Farrell said, “We can’t work for a common minimum denominator; nor can we say, ‘let’s keep our differences and just accept one another as we are.’

“We have to aim at whatever is required for the fullness of incorporation into Christ and into the one church he founded. But where is that church?” he said. “That is the question that will trouble us until Christian disunity becomes Christian unity: not uniformity, but true, grace-filled communion in faith and Christian living.”

NEXT: Papyrus fragment with reference to Jesus’ ‘wife’ stirs debate