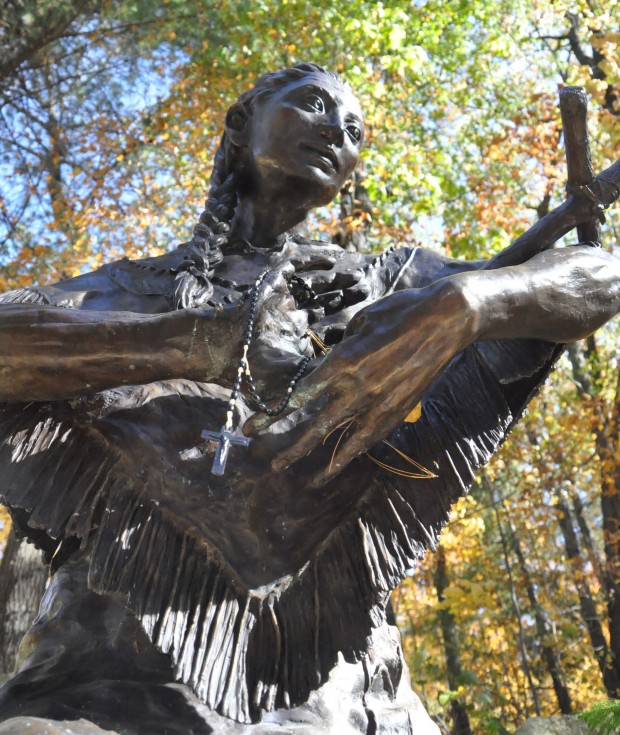 LA CROSSE, Wis. (CNS) — Since 1997, Eleanor St. John has lived for the day when one of her greatest heroes would be recognized as a saint by the Catholic Church — Blessed Kateri Tekakwitha.

That year St. John attended her first Tekakwitha Conference, named for the young maiden known as the “Lily of the Mohawks.”

Blessed Kateri, the daughter of a Christian Algonquin mother and a Mohawk father in upstate New York, will be canonized Oct. 21 at the Vatican by Pope Benedict XVI, along with several others. She will become the first Native American saint.

“Immediately after the announcement last December that she would be canonized,” St. John said, “Mass was being celebrated all over the country in celebration. People were crying in gratitude and joy. It makes me a little teary-eyed.”

A parishioner at St. Joseph the Workman Cathedral in La Crosse, St. John is a member of the Winnebago tribe of Nebraska. She and other pilgrims from the diocese were heading to Rome for the canonization.

“I know she’s the patroness of the environment and ecology, but I call her the saint of Native Americans,” she told The Catholic Times, La Crosse’s diocesan newspaper, in an interview before her departure. “We love her and are so happy she is put up in this different realm because of her sainthood.

“We feel pulled up with it because there’s so much emotion in the history of the different tribes throughout the United States that they’ve had to suffer and go through as the U.S. developed.”

In her own life, St. John said, that Blessed Kateri has inspired a greater love for Jesus and his sacrifice for the world.

“I am definitely encouraged by the faith that she had and her aspiration to be with Jesus and working for him,” she said. “She had a strong devotion to the cross and the suffering Christ made on the cross. I also encourage my daughters to think of her as a role model to help them stay pure and focused on the cross.”

A consecrated virgin since 1984, Swieciak said that about 30 years ago she first became acquainted with the Kateri as she was preparing to take her own vows of perpetual virginity. She was encouraged by her spiritual adviser at the time — then-Father Raymond L. Burke — to research the lives of famous virgins, like Kateri. (Cardinal Burke is currently prefect of the Supreme Court of the Apostolic Signature; he’s a former bishop of La Cross and archbishop of St. Louis.)

Blessed Kateri took a private vow of virginity and devoted herself to prayer and to teaching prayers to the children and helping the sick and elderly.

For her own vocation, Swieciak said, Blessed Kateri’s canonization will make more visible to the world the sort of courage necessary in a world that doesn’t particularly prize purity.

“In her own life,” she said, “Kateri would live a life of purity in the midst of being taunted. She would be walking down the path to the fields, to the chapel or to gather fire wood, and people from the village would throw mud or stones at her, taunting her, ‘Christian, go away!’ Yet she lived among them, treating them with gentleness and faithfulness.”

As a saint, Swieciak said, Blessed Kateri will serve as a more visible role model for consecrated virgins around the country.

“Kateri valued her virginity and the purity of heart for God alone,” she said. “She also valued spending her day in prayer. She’s an example of contemplative prayer though she wasn’t taught it by anyone. It was the power of the Holy Spirit and openness to grace. That was something the Jesuit missionaries were amazed at — what she knew because of the inpouring of the Holy Spirit.”

Because Kateri’s life was full of suffering that she gladly bore for Christ — at age 4 she was disfigured by small pox and her eyesight was impaired — Swieciak also sees in her hero a spiritual kinship.

“I learned from her fidelity when being misunderstood, her fidelity to the truth and the church,” she said. “I saw how many times the ways of the world tested her and her faithfulness through everything impressed me — whether people liked her or didn’t like her. There was a constancy in her life and people could count on her.”

O’Brien is a staff writer at The Catholic Times, newspaper of the La Crosse Diocese.