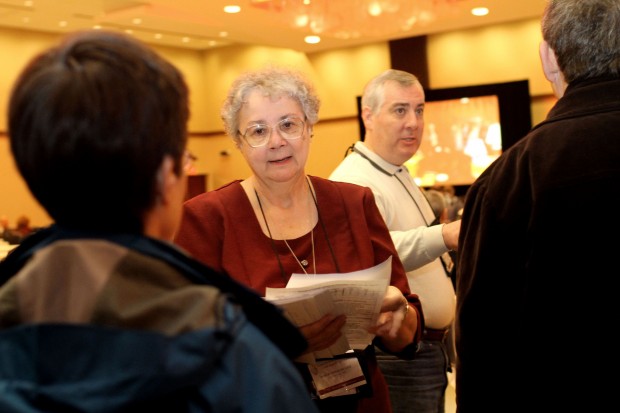 “The parish is the place where people encounter Christ regularly. That’s where people are baptized and confirmed. That’s where all their celebrations of their life take place,” said Rita Ferko Joyce, immediate past president for the Canon Law Society of America.

The society wanted to focus on the structure of the parish and explore how it has changed over the years and what it might be like in the future, Joyce said.

More than 350 canon lawyers and others involved in church legal work attended the Oct. 8-11 convention.

In a talk about parishes in the future, he described the parish as a means to reach the goal of establishing a eucharistic community. Shifting populations, a shortage of priests and a decline in religious practice are causing parish mergers and closures in the United States and will continue to do so, he said.

Msgr. Page, who has written previously about the future of the parish structure, noted that issues facing parishes today are not the same everywhere and aren’t happening everywhere at the same time.

The shortage of priests will result in more parish closing or mergers in years to come, he said.

“The parish must be renewed and be above all a eucharistic community. How can a community be eucharistic without the priest?” he asked. Therefore, priests will pastor larger and larger parishes or clusters of parishes, as is already the case in some places, he said.

U.S. parishes are being closed and merging also because the Catholic population is not aligned with where the parishes are. In recent years, the South and Southwest have seen an upswing in the number of Catholics, while more historically Catholic parts of the United States and Canada — where there are more parishes — have seen a decline, he said.

While some dioceses will continue to recruit international priests to help fill in gaps, in the short term, Msgr. Page said, many parishes will increase the roles of the laity and deacons in the parish.

“The next decades will certainly see the canonical status of the laity conform with its theology,” he said.

With the increased role of the laity, Msgr. Page said he foresees an evolution in the theology of the laity over the next 50 years, which in some ways began with the Second Vatican Council’s Decree on the Apostolate of the Laity. Increased participation of the laity will bring major change to the parish and diocesan systems and approach to priestly ministry, he said.

“It’s better to presume the laity are here to stay and we should act accordingly,” said Msgr. Page.

Even though the church has used the parish system for 16 centuries, that doesn’t mean it’s eternal, he said. There are other ways of achieving the goal of establishing eucharistic communities.

“I also think that the parish system as we have known it so far is probably going to die,” he said.

This won’t happen everywhere and at the same time. If it stays in some places, it will look different than it has in the recent past, he said.

Groups of Christians — much like lay movements and associations — will gather together in community and likely replace the parish in the future, Msgr. Page said. Lay movements will be a source of drawing back those who’ve fallen away from the church and a source of new vocations, the canonist said.

“One should remember that the parish is not the church. The church has lived before the parish existed,” he said. “She will not disappear if the parish system as we have known it ceases to exist.”

In the closing address, Franciscan Sister Katarina Schuth, chair for the social scientific study of religion at the University of St. Thomas in St. Paul, Minn., spoke about lay ecclesial ministers in parishes and the people they serve.

The 2012 Official Catholic Directory reports 40,000 lay ministers serve the U.S. church today. That number increases to more than 200,000 if Catholic school teachers are included, she said.

These ministers are serving diverse communities with diverse needs and will increase with the shortage of priests and future changes in parishes. In many places already, Sister Schuth said, laypeople are doing jobs that used to be done by a priest.

NEXT: Native Americans feel ‘pulled up’ by Blessed Kateri becoming a saint