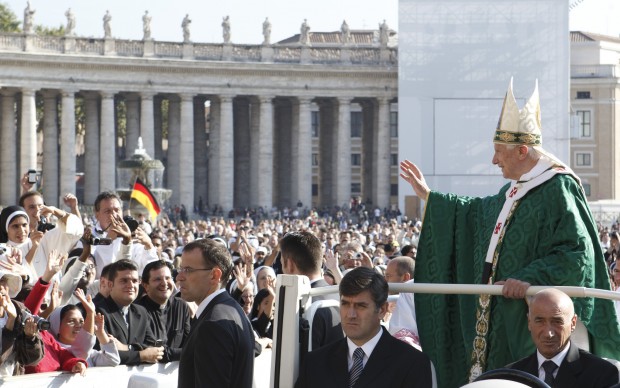 Pope Benedict XVI greets the faithful as he arrives to celebrate a Mass in St. Peter's Square at the Vatican Oct. 11. The Mass marked the 50th anniversary of the opening of the Second Vatican Council and also opened the Year of Faith. (CNS photo/Paul Haring) 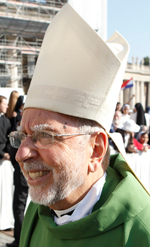 Bishop Gerald F. Kicanas of Tucson, Ariz., center, arrives with other bishops for a Mass celebrated by Pope Benedict XVI in St. Peter’s Square at the Vatican Oct. 11 to mark the 50th anniversary of the opening of the Second Vatican Council. The bishop also is writing a blog on the Synod of Bishops in Rome.

VATICAN CITY (CNS) — Marking the 50th anniversary of the opening of the Second Vatican Council and the start of a special Year of Faith, Pope Benedict XVI called on Catholics to revive the “authentic spirit” of Vatican II by re-proposing the church’s ancient teachings to an increasingly Godless modern world.

The pope spoke at a special Mass in St. Peter’s Square Oct. 11, half a century to the day after the opening ceremonies of Vatican II. About 400 bishops from around the world, including 15 of the 70 surviving members of the 1962-65 council, attended. Orthodox Ecumenical Patriarch Bartholomew of Constantinople and Anglican Archbishop Rowan Williams of Canterbury attended as special guests.

The observances featured ceremonies recalling milestones of Vatican II, including the enthronement of a book of the Gospels used at the original gathering and a re-presentation of the council’s final “messages” to various categories of lay Catholics, such as artists, workers and women.

Vatican II, Pope Benedict said, had been “animated by a desire … to immerse itself anew in the Christian mystery so as to re-propose it fruitfully to contemporary man.”

He noted that Blessed John XXIII, in his speech at the opening of the council, called for both the safeguarding and the effective teaching of the “sacred deposit of Christian doctrine … this certain and immutable doctrine, which is to be faithfully respected, (and) needs to be explored and presented in a way which responds to the needs our time.”

“The council fathers wished to present the faith in a meaningful way,” the pope said, “and if they opened themselves trustingly to dialogue with the modern world it is because they were certain of their faith, of the solid rock on which they stood.”

One of the council fathers, retired Bishop William J. McNaughton of Inchon, Korea, traveled to the anniversary Mass from his home in Methuen, Mass. Speaking recently to Catholic News Service, he recalled the procession of more than 2,200 bishops into St. Peter’s Basilica on the council’s first day.

“Because television cameras from all over the world were taking pictures, all the lights were on in the basilica,” said Bishop McNaughton, 85. “I thought I was at the gate of heaven.”

The commemoration was less spectacular and less well-attended than the 1962 event.

“The many empty seats here, five minutes before the beginning of the Mass, show that we have many challenges, like decreasing interest in the church,” Capuchin Father William Henn, an American who teaches at Rome’s Pontifical Gregorian University, told CNS.

Pope Benedict’s homily celebrated Vatican II but deplored much of what followed in its wake.

Many Catholics misunderstood or ignored the council’s teachings under the influence of secular culture and “embraced uncritically the dominant mentality, placing in doubt the very foundations of the deposit of faith, which they sadly no longer felt able to accept as truths,” he said. “Recent decades have seen the advance of a spiritual ‘desertification.'”

Fifty years ago, history offered glimpses of a “life or a world without God,” he said. “Now we see it every day around us. This void has spread.”

Yet, the pope said, a “thirst for God, for the ultimate meaning of life” is still evident in “innumerable signs,” including the growing popularity of religious pilgrimages.

“How come so many people today feel the need to make these journeys?” he said. “Is it not because they find there, or at least intuit, the meaning of our existence in the world?”

Calling for a revival in the church of the “yearning to announce Christ again to contemporary man,” the pope stressed that any new evangelization “needs to be built on a concrete and precise basis, and this basis is the documents of the Second Vatican Council.”

He reaffirmed past statements rejecting any expansive notions of a “spirit of Vatican II” that might be used to justify innovations diverging from traditional doctrine.

“I have often insisted on the need to return, as it were, to the ‘letter’ of the council — that is to its texts — also to draw from them its authentic spirit,” the pope said. “The true legacy of the council is to be found in them.”

The pope also reiterated one of his most prominent teachings about Vatican II, that it must be understood in continuity with the church’s millennial traditions, not as a radical break with the past.

“The council did not formulate anything new in matters of faith, nor did it wish to replace what was ancient,” he said. “Rather, it concerned itself with seeing that the same faith might continue to be lived in the present day, that it might remain a living faith in a world of change.”

Contributing to this story was Sarah Delaney. 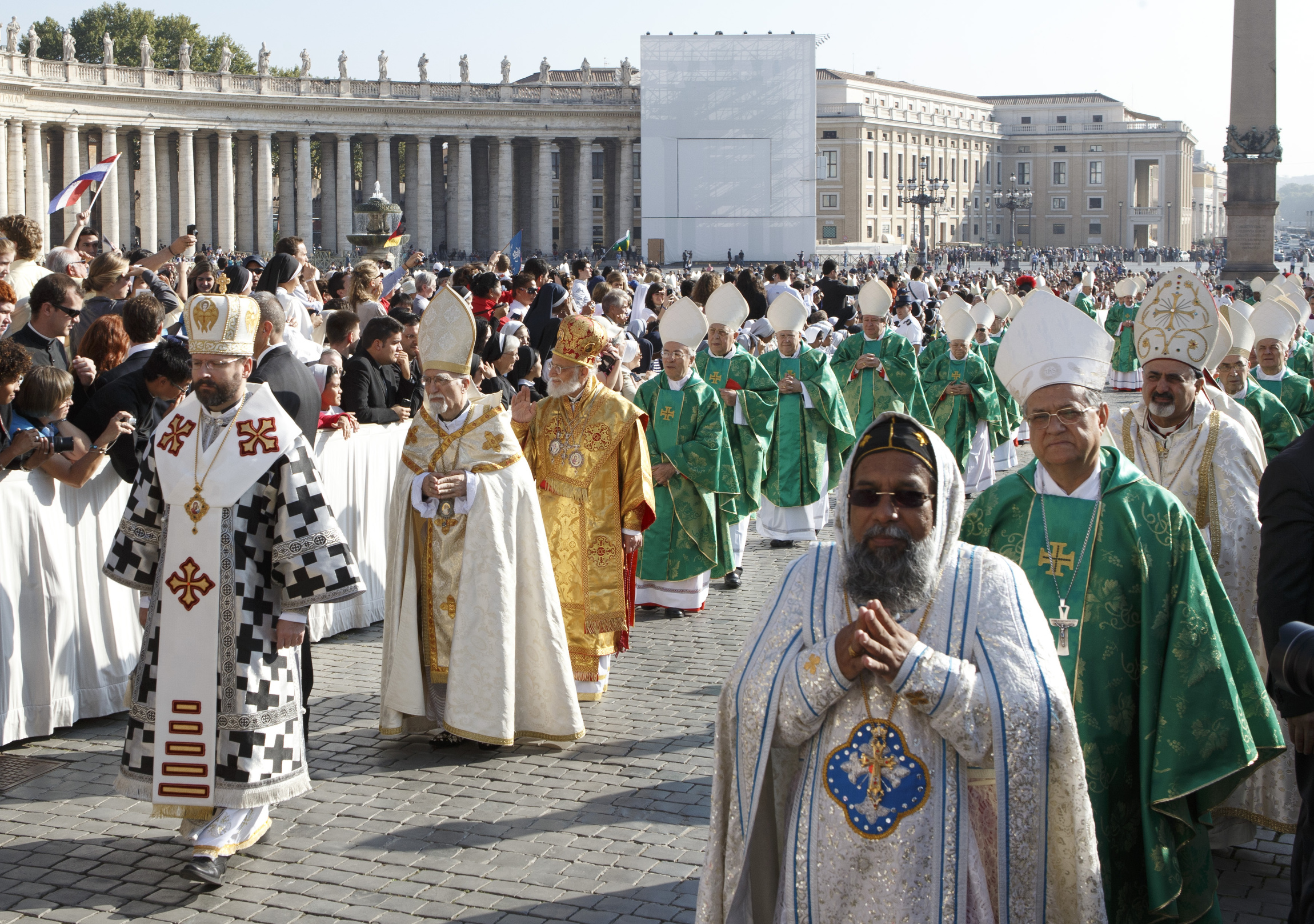 Prelates from around the world arrive in procession Oct. 11 for a Mass celebrated by Pope Benedict XVI in the Vatican’s St. Peter’s Square to mark the 50th anniversary of the opening of the Second Vatican Council. The Mass also opened the Year of Faith. (CNS photo/Paul Haring)

NEXT: Evangelization must flow from experience, Anglican leader tells synod