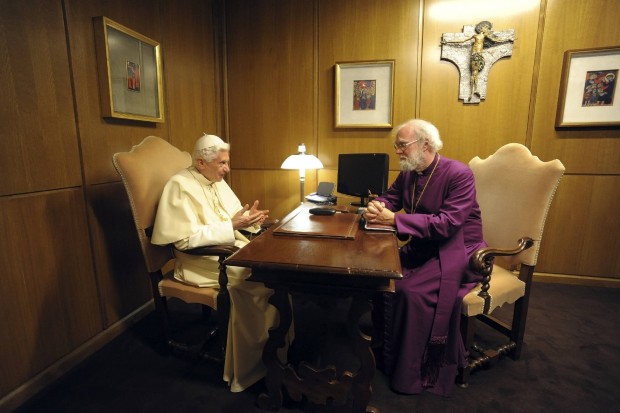 VATICAN CITY (CNS) — Evangelization is not a project, but the natural “overflow” of an experience of Christ and his church that transforms lives, giving them meaning and joy, the spiritual leader of the Anglican Communion told Pope Benedict XVI and the Synod of Bishops.

“Those who know little and care even less about the institutions and hierarchies of the church these days” nevertheless are attracted and challenged by Christians whose lives show they have been transformed by their encounter with Christ, said Archbishop Rowan Williams of Canterbury, head of the Church of England.

The leader of the Anglican Communion was invited by Pope Benedict to deliver a major address at the synod on the new evangelization Oct. 10.

Archbishop Williams began his talk by remembering the Second Vatican Council, which, he said, was a sign that “the church was strong enough to ask itself some demanding questions about whether its culture and structures were adequate to the task of sharing the Gospel with the complex, often rebellious, always restless mind of the modern world.”

In many ways, he said, the synod on new evangelization is a continuation of the work of Vatican II.

Presenting the Gospel means being confident that it has a distinctive, life-giving message, the archbishop said. Confidence in the message, and not in oneself, can be cultivated only through contemplation, he said.

“With our minds made still and ready to receive, with our self-generated fantasies about God and ourselves reduced to silence, we are at last at the point where we may begin to grow,” he said.

“The face we need to show to our world is the face of a humanity in endless growth toward love, a humanity so delighted and engaged by the glory of what we look toward that we are prepared to embark on a journey without end to find our way more deeply into it,” Archbishop Williams told the synod.

During an interview earlier in the day with Catholic News Service and Vatican Radio, the archbishop said, “If evangelization is just rallying the troops or just trying to get people to sign up, something’s missing — what’s missing is the transformed humanity that the Gospel brings us.”

The archbishop urged the synod to support the Taize ecumenical community and similar ecumenical efforts that help people learn prayer and contemplation. “The more we keep apart from each other as Christians of different confessions,” the less convincing we will be, he told synod members.

He also told the pope and synod participants that nurturing a habit of contemplation “strips away an unthinking superiority toward other baptized believers and the assumption that I have nothing to learn from them.”

Archbishop Williams, who has announced he will retire at the end of December, also had a private meeting with Pope Benedict Oct. 10.

Earlier in the day, he told CNS and Vatican Radio that the Second Vatican Council was “enormously important” for other Christians as well as for Catholics.

“I was a teenager as the council began, and a practicing Anglican, and what had been a very self-contained, rather remote, exotic, fascinating, but strange body, suddenly opened up,” he said. Seeing what the Catholic Church did with the council led other churches to re-think how they, too, were interacting with the wider world and with one another.

Preparing to retire, he said he obviously is disappointed that efforts to promote full, visible Christian unity have not progressed further, but no one can deny that Christians pray and work together today in a way that would have been unimaginable in the 1950s.

“Praying together isn’t just a casual thing, a marginal activity,” he said. When divided Christians “share the prayer of the church,” even if they cannot share the fullness of that prayer in the Eucharist, they are placing themselves before God together and showing the world what it means to be Christian.

At the same time, he said, the Catholic Church and Anglican Communion both have changed over the past 50 years and “we don’t, when we change, always wait for one other.” The archbishop did not identify specific changes, but Blessed John Paul II and Pope Benedict have said the move in many Anglican churches to ordain women priests and bishops has become a new obstacle to full unity.

The Anglican discussions and debates took place and continue to take place very publicly. Asked if there was concern about finding a balance between letting people see the process of discernment and not scandalizing people with the differences existing within a Christian community, he said, “the desire not to give scandal is doubtless very worthy in some ways, but it’s so often an excuse for denial (or) sweeping things under the carpet.”

At the same time, he said, “there is a real spiritual, and not just practical, question about a church which gets so obsessed with its own internal church politics and conflicts — the drama, the clashes and controversy, what I call the soap opera of church life — there’s something spiritually very damaging if we just sort of wallow in that. And thus, from time to time, pastors and teachers of the church have to say, ‘Whoa, step back, just remind yourselves of what we’re here for.'”

Without contemplation, the richness of spirituality and the experience of faith in Jesus, he said, “it’s just a matter of winning arguments or winning battles, God help us.”

In his 10 years as head of the Church of England, he said, one of the most enjoyable and faith-confirming things he did was to visit schools and parishes, being with “people who are doing what matters.”

One of the “great illusions” bishops can fall prey to, he said, is thinking that what they do in the office is what really matters. Instead, he said, people who are questioning, people who are educating and offering guidance, people who are “developing in faithful discipleship” are doing the work of the church.

NEXT: South Sudan seminary limits students as it confronts challenges