After Sandy, parishes will try to go forward step by step, priest says 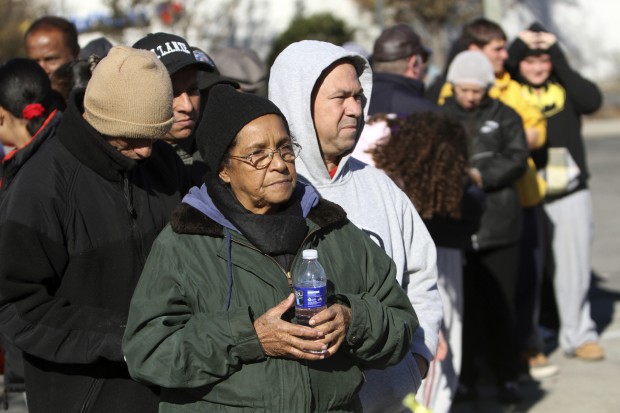 Residents line up to receive water, clothing and other necessities in Island Park, N.Y., Nov. 4. The village of Island Park, which remained without electricity Sunday, was one of the worst hit areas of Long Island when the superstorm Sandy swept through the Northeast Oct. 29. (CNS photo/Gregory A. Shemitz) 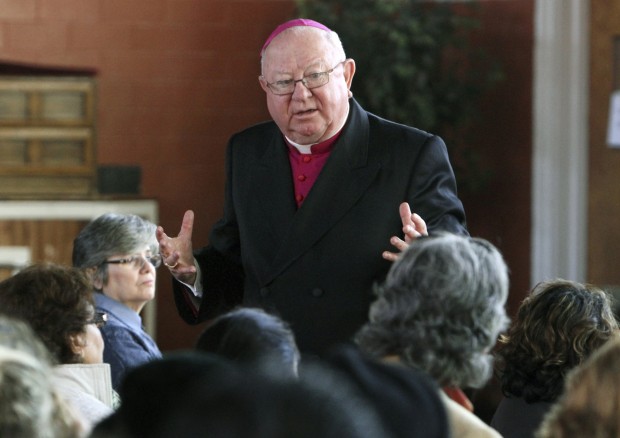 Bishop William F. Murphy of Rockville Centre, N.Y., talks to parishioners of St. Mary of the Isle Church in Long Beach, N.Y., during Mass in the parish auditorium Nov. 4. (CNS photo/Gregory A. Shemitz)

ROCKAWAY BEACH, N.Y. (CNS) — After Hurricane Sandy swept through the East Coast, leaving untold destruction behind, cleaning efforts were under way at St. Rose of Lima Church in Rockaway Beach.

“Step by step, we will try to go forward,” said Father Wladyslaw Kubrak, parochial vicar, as he shoveled leaves and branches off the church driveway.

Although the church sustained serious water damage and had no power, Father Kubrak was not planning on evacuating. He planned, however, to leave Rockaway Peninsula to recharge his electrical batteries and to bring back fresh food.

He told The Tablet, newspaper of the Brooklyn Diocese, that he wanted to stay to continue to console the people coming for guidance after they have lost so much. The church, he said, stayed opened the night of Oct. 30 for people who needed shelter, and the chapel was open for adoration of the Blessed Sacrament.

Father Kubrak said he also was able to console people with the sacrament of reconciliation.

A day after Hurricane Sandy ravaged the Brooklyn Diocese with floods, fire and utility outages, Bishop Nicholas DiMarzio visited the most affected parishes to gain a better understanding of the state of the diocese and to pray with his people.

“It’s hard to think that this kind of destruction could happen in our city,” he said as he rode along the Rockaway Peninsula.

The bishop traveled from church to church and witnessed the devastating effects the ocean’s waters had on people’s lives, their homes and church buildings.

In Breezy Point in the New York borough of Queens, fires consumed more than 100 homes. Bishop DiMarzio was relieved to see that the church buildings were spared.

Among the parishes that opened their church doors for people whose homes are no longer habitable, was Blessed Trinity Church in Breezy Point. It is located in the mandatory evacuation zone declared for Hurricane Sandy, but Msgr. Michael Curran, pastor, initially remained at the rectory.

He said power went out Oct. 29 at 7 p.m. In the immediate aftermath of the storm, the police set up a command center in one of his church buildings.

Bruce Angle was among the Breezy Point residents who did not evacuate and watched as flood waters forced their way into his home. He said the water was a couple of feet high and his beds were completely soaked. He spent the next night sleeping in the choir loft of St. Thomas More Church, a worship site of Blessed Trinity Parish.

“There is no heat, but it’s still warmer than my house,” he said the morning of Oct. 31. He had used a priest’s chasuble as a blanket to keep warm during the night.

Msgr. David Cassato, chaplain to the New York City Police Department, and Msgr. Jamie Gigantiello, pastor of Mary Queen of Heaven Parish in Mill Basin, joined Bishop DiMarzio on his pastoral visit. At every stop people came to speak with them, some in tears and others asking for prayers.

Bishop DiMarzio said he will ask parishes throughout the diocese to take up collections to help with the rebuilding process. He will also coordinate with Catholic Charities’ emergency action plan to get people the help they need. He said his message to the faithful is: “Pray for the people of the peninsula. They have a long road to recovery.”

That road, however, seems murky to many people affected by the natural disaster.

“I don’t think anyone knows what the process is,” said Bill Slattery, who saw his family’s secondary residence in Breezy Point reduced to a pile of ash. “All you know is what you hear on the radio.”

However, he said the people in the community take care of each other.

“There is no one person who is alone, we are all a community,” he said, so as soon as information is available to one person, everyone will know, even if they don’t have access to electricity or a phone, he said.

In neighboring New Jersey in the Diocese of Paterson, the full extent of damage to the physical plants of diocese’s 111 parishes is still being learned by insurance adjustors, according to Richard Sokerka, communications director for the diocese. Worst hit were rural and suburban areas with downed trees.

“I lost a pine tree on my lawn. Luckily it missed my house and crashed through the fence,” Sokerka said.

The power to Sokerka’s home was restored in 48 hours, “which is a miracle,” he added. But for many others in the three-county diocese, “the power companies are still giving dire forecasts of seven to 10 days” to restore power, he said. Diocesan Catholic Charities agencies had power, but phone and Internet problems have forced them to put together a cell-phone network to start relief efforts.

A special collection will take place in parishes the weekend of Nov. 10-11. Half will go to diocesan Catholic Charities agencies serving the needy affected by Sandy, and the other half will go to parishes whose storm damage was not covered by insurance.

Zielinska is on the staff of The Tablet, newspaper of the Brooklyn Diocese. Contributing to this story was Mark Pattison in Washington. 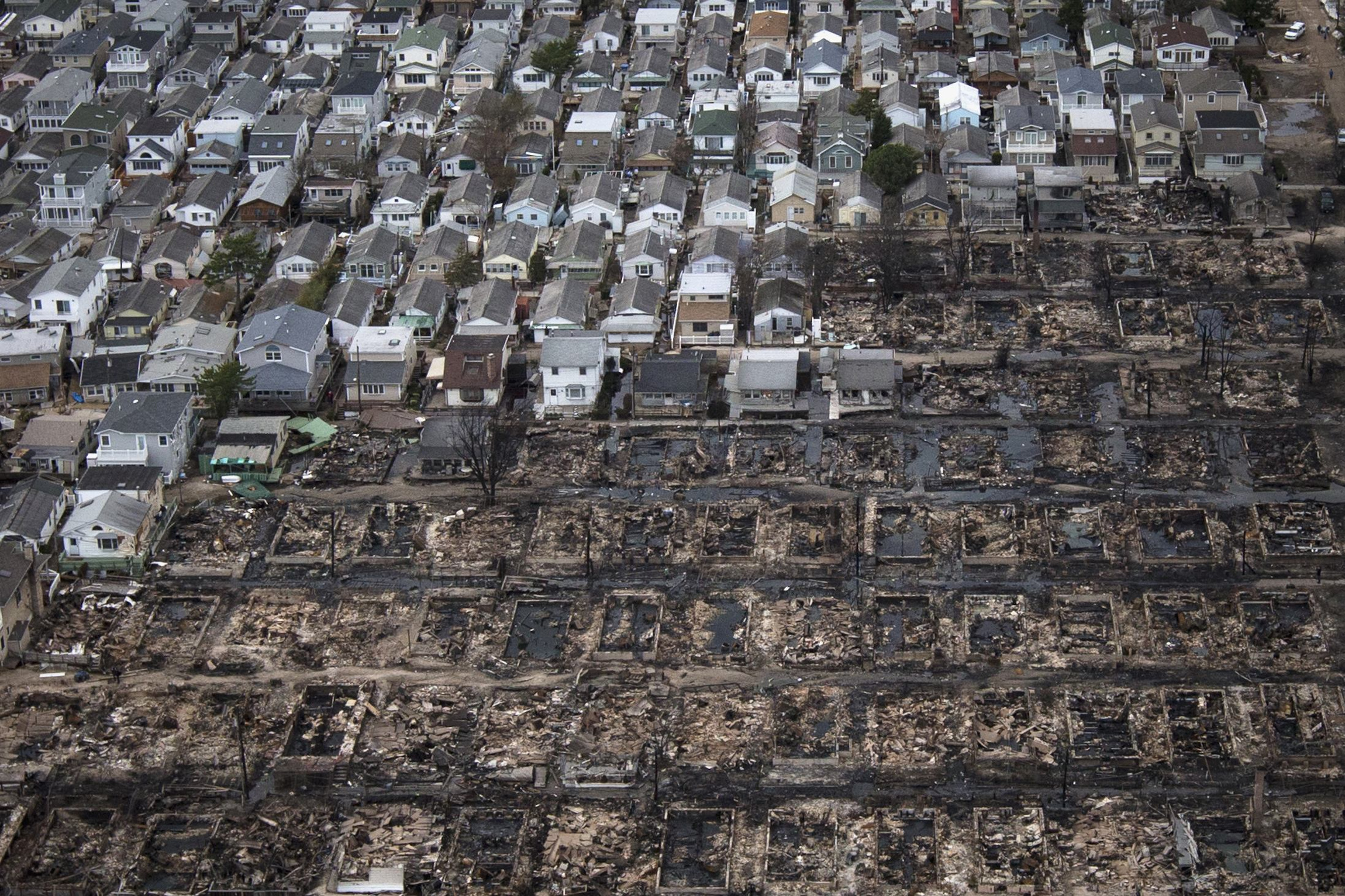 An aerial view Nov. 1 shows the remains of houses burned to the ground next to houses that survived Hurricane Sandy when it hit the Breezy Point section of the New York borough of Queens Oct. 29. The Northeast region of the U.S. began crawling back to normal after the monster storm crippled transportation and knocked out power for millions. (CNS photo/Adrees Latif, Reuters)

NEXT: Panel: Understanding role of faith in society essential to US diplomacy