Panel: Understanding role of faith in society essential to US diplomacy 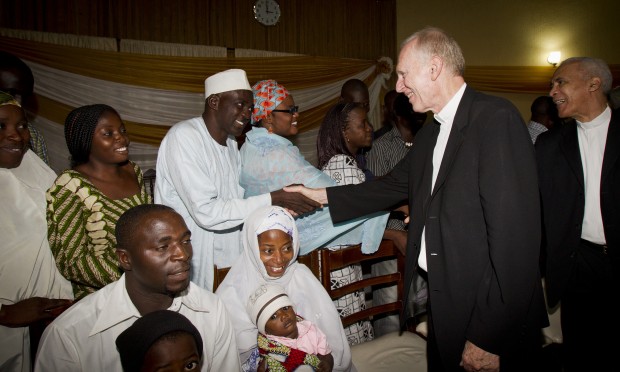 WASHINGTON (CNS) — Understanding a country’s culture has always been a key part of diplomatic training, but for decades, the religious community has pushed the State Department to pay more and better attention to the role of faith in society.

“In many places around the world, understanding religion is imperative to understanding the local civil society,” explained a recent white paper by a State Department-created Religion and Foreign Policy Working Group.

When four out of five people on the planet believe in a higher power, it said, “religious faith and adherence is often a source of conflict that contributes to global instability and undermines long-term U.S. interests.”

However, the paper continued, those same faith forces “contribute much good to civil society, and when properly engaged can promote human progress and peaceful coexistence on a global scale.”

Ignoring such religious impulses or minimizing their role “because we are uncomfortable with them, or do not have time or interest to understand them in context, is no longer an option for U.S. policy,” it said.

Paul Miller, foreign aid adviser at Catholic Relief Services and one of two CRS members of the working group, told Catholic News Service in a Nov. 1 interview that the State Department has made progress in raising the importance of religion in diplomacy over the past 20 years or so. But there’s still plenty of room to improve.

He served on a subgroup of the working group that focused on foreign aid partnerships. The entire working group consisted of dozens of religious and community leaders. Bishop Howard J. Hubbard of Albany, N.Y., and Scott Appleby and Gerard Powers, both of the University of Notre Dame’s Kroc Institute for International Peace Studies, were among the Catholics involved.

As an example of areas that need work, Miller explained that the U.S. government requires agencies that partner with it — which CRS does around the world — to submit personal data about all the people working with them, including subcontractors. That information is used to screen for possible terrorist threats.

Miller said he understands the security need, but because the request for data comes through CRS, at times that could put CRS employees or their in-country partners at risk. In some places, CRS might, for example, partner with a local religious organization that has ties to another organization considered to be a possible terrorism risk.

“How do you work in an area controlled by a group that’s on the terrorist watch list?” he asked, citing some past partnerships in Somalia as an example. Security screening should not be channeled through the entities that might have to craft delicate relationships with local religious organizations, Miller said.

New guidance adopted by the State Department in October is intended to address some of those concerns, which were part of a recent set of recommendations by the working group, one of several formed by the agency as part of its Strategic Dialogue with Civil Society.

The guidance to diplomatic and consular posts is aimed at helping diplomatic staff understand some basic principles of interaction with faith-based civil societies “and to ensure that misconceptions do not unnecessarily limit their outreach,” it says. The guidance encourages employees to “engage with faith-based civil society on the entire range of issues relevant to U.S. policy priorities.”

Knox Thames, director of policy and research at the U.S. Commission on International Religious Freedom, told CNS that there’s been a lot of headway in persuading the State Department to update its thinking about religion in diplomacy. He was careful to note that progress in this area has come under both Republican and Democratic administrations.

The commission is an independent agency created by Congress to monitor and report on the state of religious freedom around the world and to advise the government on how its foreign and trade policies should incorporate religious concerns. A long-standing area of its recommendations has been for the State Department to more thoroughly train about religion and to engage more with religious entities.

“The foreign policy establishment is traditionally religious-adverse,” Thames said. “One factor is the fear of getting it wrong, another is that they often don’t feel equipped” to understand the role of religion in a society.

The creation of the working group is one example of Secretary of State Hillary Clinton’s efforts on the topic, he said.

And the Obama administration’s opening of an office for faith-based interests within agencies including the U.S. Agency for International Development, has helped. But “there’s always more that can be done,” said Thames. For instance, he noted that there isn’t a faith-based office within the State Department, although most other Cabinet-level agencies have them.

The white paper acknowledged that the State Department has several special envoys “tasked with religious engagement,” such as one to monitor and combat anti-Semitism and others assigned to focus on Muslim communities.

It also credited some of the department’s offices with actively engaging with religious leaders and communities on specific issues including religious freedom and human rights, development and humanitarian aid, conflict prevention, countering violent extremism, narcotics and human trafficking.

But the paper also commented on weaknesses, such as the lack of a formal structure for handling faith-related concerns and most notably the culture of the State Department.

The mindset of the agency “is not always conducive to serious engagement with matters involving religion.” Some of that stems from concern about violating the First Amendment, the paper said, but “there seems to be a cultural view that religion is anachronistic and that it is a source of conflict and division. Therefore, religion is often not seen as a force for peace, human rights, democracy and development.”

Miller, whose boss at CRS, executive director Carolyn Woo, was also on the working group, said there is recognition within the State Department that better working relationships with religious groups, clearer guidance from the agency and better training of staff are necessary to improve the way religion is tied to diplomatic work.

“This secretary has made a quantum leap” at improving the stature of religious interests to State Department work, he said.

“There is commitment at the top,” he said. “But we’re still not there yet.”