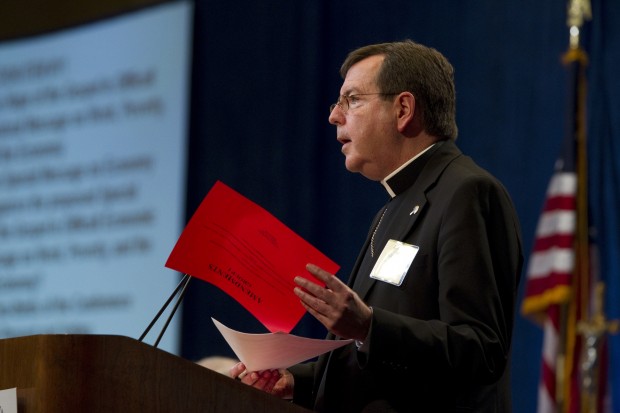 Archbishop Allen H. Vigneron of Detroit presents amendments to a proposed document on the economy — one intended as a pastoral message of hope — during the U.S. bishops annual fall meeting in Baltimore Nov. 13. (CNS photo/Nancy Phelan Wiechec)

BALTIMORE (CNS) — The U.S. bishops’ effort to send a pastoral message of hope in trying economic times came up short of the votes needed Nov. 13, after concerns were raised about its limitations, its expedited process and whether it actually was something that they would use to reach out to people.

With the vote of 134 to 98 and nine abstentions falling short of the 152 needed for the two-thirds required for passage, “The Hope of the Gospel in Difficult Times: A Pastoral Message on Work, Poverty and the Economy” was set aside on the second day of the bishops’ annual fall general assembly in Baltimore.

“There’s no sting, no bite to this,” said retired Auxiliary Bishop Peter A. Rosazza of Hartford, asking for it to be set aside. He noted that there had been no consultation with an economist in the document’s preparation, as requested when the message was commissioned.

At their June meeting in Atlanta, by a vote of 171-26, the bishops had asked for “something more than a public statement” to express their concern about poverty and the struggles of unemployed people.

The result, whose length was within the 12 to 16 pages suggested in June, was criticized on the floor in Baltimore after it was introduced Nov. 12 for a variety of reasons, including for being too long to be practical and for failing to include a variety of points and historical references.

Still, almost every bishop who rose to speak about it pointedly acknowledged the hard work of the drafting committee, headed by Detroit Archbishop Allen H. Vigneron, and the staff. Some who encouraged voting it down suggested ways of preserving the work for a subsequent document, to be written following a more typical USCCB process and under the direction of the Committee on Domestic Justice and Human Development.

At a press briefing immediately after the session, New York Cardinal Timothy M. Dolan, president of the bishops’ conference, said it would take a while to digest why the message didn’t pass, but said he’d learned a lesson about not following the usual processes of the conference.

“Whenever we bypass the process, we get burned,” Cardinal Dolan said. A formal statement of the bishops’ conference typically is a multiyear, or at least a full yearlong process. He said if he’s asked to bypass the usual process for a statement again, he’d certainly say no.

The frustrations of some bishops with the document were being voiced conversationally before the fall session opened Nov. 12. As several bishops said on the floor of the meeting, they only saw the draft for the first time as they arrived in Baltimore for committee meetings the weekend before the Nov. 12-15 meeting.

“This has not yet reached the level of excellence that we hope would be well received,” said retired Archbishop Joseph A. Fiorenza of Galveston-Houston.

Bishop Thomas J. Tobin of Providence, R.I., said he would vote against the document not so much because of its content, “but because I wonder about its relevance. I don’t think there are too many people who will read … or benefit from it.”

He added that “there are some real issues we have to deal with and if we want to give a message of hope to our people it’s not going to be in another document.”

He said the bishops “should veto the document and go home and find ways to help people in tangible, practical ways.”

Bishop Blase J. Cupich of Spokane, Wash., also said he didn’t think he would “share this with anybody.”

Bishop Cupich said the situation “goes to the issue of process,” because both the committee doing the writing and the bishops being asked to approve it were rushed. “It puts you under the gun and it’s unfair,” he said.

“I’m sorry the process got in the way,” he added.

A motion by Bishop Robert N. Lynch of St. Petersburg, Fla., to postpone a vote, allowing for time to rework the statement was voted down.

Just a few bishops rose to speak in favor of the document, although a majority voted to support it. Ultimately, the number of those who voted to approve the document did not reach the two-thirds required for passage.

Cardinal Daniel N. DiNardo of Galveston-Houston said he would vote for the message. “Many people rising today seem to be upset because we didn’t write a major pastoral letter. That’s not what we asked you to do.”

“If the bishops as a body feel this was not fully articulate, it’s our fault,” he continued. “You did what we asked you to do.” He added that he did think it was too long. “It looks like a message trying to become a pastoral letter.”

NEXT: Organists plentiful but not many parishes ‘blessed’ with budget for one