Organists plentiful but not many parishes ‘blessed’ with budget for one 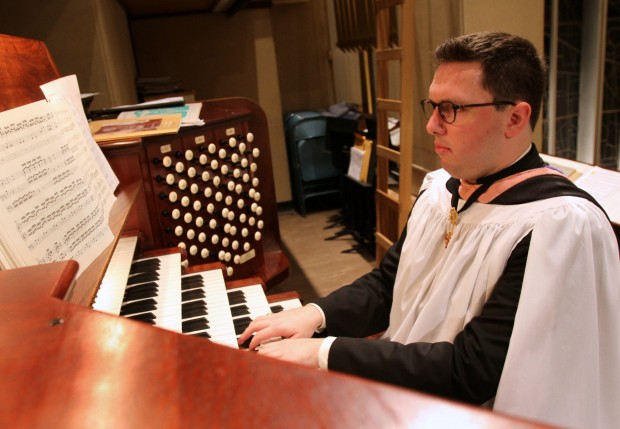 Paul J. Murray, director of music at the Church of the Holy Family in the Manhattan borough of New York, plays the organ during a prayer service in 2010. Music conservatories are producing a bumper crop of organ performance graduates, but parishes often struggle to afford to have an organist on staff.(CNS photo/Gregory A. Shemitz)

NEW YORK (CNS) — If music conservatories are producing a bumper crop of organ performance graduates, why can’t the parish down the street get a substitute organist for the 10 a.m. Mass?

There’s no single answer, but liturgical musicians who spoke with Catholic News Service attribute it to parish finances, cultural changes and the pastor’s interest in music.

“Not many parishes are blessed with a budget for both a music director and an organist,” said Jennifer Pascual, music director at St. Patrick’s Cathedral in New York. “Music directors are expected to be skilled musicians, conductors and administrators.”

Joseph Viserta, music director at the Church of the Resurrection in Rye, said: “A lot of parishes don’t have the resources to pay a qualified organist to work full time, so these musicians have other jobs, sometimes as music teachers in public schools, and they show up on Sunday, play for two Masses, run a choir practice and get a stipend.”

If there is a music director, he or she is typically also an organist, Viserta said.

The Second Vatican Council gave the role of music in worship a huge boost. In its 1963 Constitution on the Sacred Liturgy, the council affirmed music is an integral part of the liturgy. It called for the congregation’s active participation at Mass through musical elements including acclamations, responses, psalmody, antiphons and songs.

As parishes heeded the call to incorporate more music, many moved away from traditional organ pieces to contemporary music played on a variety of instruments. The results varied in quality and mirrored cultural changes in society and the church, according to Paul J. Murray, music director, organist and liturgy coordinator at the Church of the Holy Family in Manhattan.

Describing liturgical music of the 1960s and 1970s, Father Robert J. Robbins scoffed, “They threw out the baby with the bath water. There was no reference to anything except bluegrass.” Father Robbins, director of the New York archdiocesan Community Outreach Office, is the former longtime pastor at Holy Family and the man who hired Murray.

“Music done well, no matter what style, has the ability to move our innermost being,” Murray said. “In church music, so often we forget we’re there to pray, not for a concert. If the music helps us pray, it’s good.”

According to J. Michael McMahon, president of the National Association of Pastoral Musicians in Silver Spring, Md., “music for the liturgy is not about the organ. Liturgy is sung, not played. Instruments exist to foster a sung liturgy.”

“In the last 50 years, there has been enormous growth in the quality, amount, leadership and format of music in liturgy,” added McMahon, an organist.

But the effort to engage worshippers in participating in liturgical music is counter to the current culture, he said. “Music has become the background to our life, rather than an activity in which we’re taking an active part. In our culture, we’re more consumers of music than producers.”

He said the music education of “ordinary people” is headed in the wrong direction, as evidenced by what he called the “tragic” elimination of music classes in some public schools — resulting in a huge problem in forming people for liturgy.

The musicians interviewed said liturgical music ministry is a vocation. Some discover it in themselves, others are led to it. All require training and mentorship.

“I knew from the age of 10 I wanted to be a church musician and I sought out the right teachers,” Murray said. “At the core, though, is the training you do on your own, because it’s a vocation. I never had a teacher sit down with me and tell me how to pick hymns according to the readings.”

Viserta switched gears in college, tucking away a commercial pilot’s license to concentrate on studying the church music he played in high school. He realized he wanted a career that would make him happy.

The Catholic University of America, Duquesne and Yale universities, the University of Notre Dame and St. John’s University in Collegeville, Minn., are among the schools that offer degree programs to train church musicians. The National Association of Pastoral Musicians, the Church Music Association of America and the American Guild of Organists promote liturgical music and the development of its practitioners.

“Church musicians need formation and ongoing training. Every professional goes for updating. I wouldn’t trust myself to the care of a doctor who never went back to study after graduating from medical school,” Ferraro said.

Pastoral support and parish economics are significant factors in staffing liturgical music posts. “Music ministry, as important as it is, is kind of an afterthought in a lot of parishes,” Viserta said.

“Having a pastor who’s interested is essential to the success of a church music program. It’s really the life force of the program,” Murray said.

Similarly, he and Father Robbins said a change in pastors often means that the music director is out of a job within one year. “It’s a real problem. There’s no stability,” Murray said.

There is no national directive on liturgical music or universal agreement on salaries and stipends, although diocesan music commissions and worship offices provide guidelines to parishes and the professional organizations recommend pay scales based on training, experience and levels of responsibility.

Plus, “the whole musical landscape has changed and organ music is taking it on the chin,” McMahon said.

“Mainstream music is contemporary and doesn’t require the use of an organ,” Pascal said. Growing Hispanic and African Catholic congregations do not have pipe organ music as part of their culture.

Nonetheless, “the pendulum is swinging back toward traditional organ music,” Murray said. “More new churches have organs and others are rebuilding pipe organs and replacing electronic organs.”