People lost ‘stuff’ in storm but still have each other, priest says 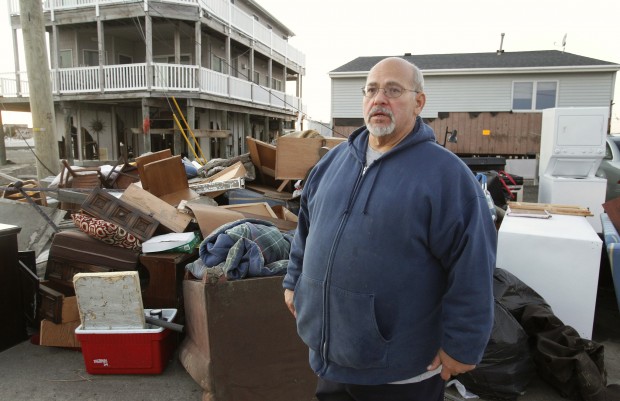 Michael Santo, a parishioner of St. Theresa Church, is surrounded by ruined belongings from his Tuckerton, N.J., home Nov. 5. The waterfront community took a huge blow from Hurricane Sandy a week ago. (CNS photo/Bob Roller) 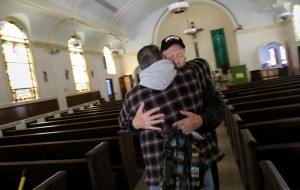 Father Anthony M. Rucando, right, embraces Deacon Alex Breviario inside Our Lady of Grace Church in the Howard Beach neighborhood of Queens in New York Nov. 5. The priest said he was relieved to see Breviario after not being about to reach him by phone for the week since Hurricane Sandy struck. (CNS photo/Gregory A. Shemitz)

ISLAND PARK, N.Y. (CNS) — Sacred Heart Church in Island Park is in an area of the Diocese of Rockville Centre among the most devastated by Hurricane Sandy, but the pastor urged parishioners not to fret about the material goods they have lost.

“Don’t be angry. We lost stuff. We will get other stuff,” Msgr. John Tutone, pastor, told the congregation during his homily at Sunday Mass Nov. 4. “We still have each other and the people we love. That’s the most important thing.”

In the community of 10,000 people in the southwest corner of Nassau County, Long Island, 80 percent of the homes were flooded. The church, too, was flooded with about a foot of water, damaging the floor. Three feet of water was pumped out of the parish center, which is now being used for Masses.

As of Nov. 4, Island Park was still without electricity and the village’s mayor, James Ruzicka, announced at the end of Sunday Mass that it would be at least another two weeks before power was restored.

He shared a story about a stranger’s generosity. After the hurricane, a man in his 70s whom the priest did not know, drove up to the church and saw Msgr. Tutone outside. He was not wearing his clerical garb. The man asked him if he was the parish priest. After Msgr. Tutone said he was, the unidentified man handed him a bank envelope and told him to “rebuild your church” before driving off.

When Msgr. Tutone later opened the envelope, he found $1,500 in cash inside.

In Long Beach, an island just south of Island Park that faces the Atlantic Ocean, 35,000 residents also were devastated by the hurricane, left without electricity and a working waste disposal system. Portable toilets were spread throughout the city.

St. Ignatius Martyr is a sturdy 88-year-old Lombard Romanesque brick church that sits a block from the ocean. The church survived the hurricane of 1938, the worst storm to hit Long Island until Sandy, but the super storm caused minimal damage to the church, though the rectory basement was flooded to the ceiling. 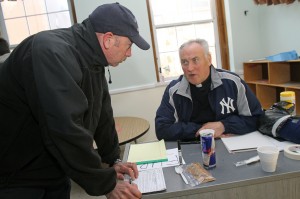 Msgr. John Brown, pastor of St. Francis de Sales Church in the Belle Harbor neighborhood of Queens, talks with Chris Webber of the Federal Emergency Management Agency Nov. 5 in New York. The parish was serving as a major outreach center for area residents affected by Hurricane Sandy. Belle Harbor, located in the heart of the Rockaway peninsula, was devastated in the late October superstorm. (CNS photo/Gregory A. Shemitz)

Chris and Dawn Hagen attended with their children, son Gerrin, 7, and Tara, 5.

Going to Mass “was important to restore some routine to our lives. We wanted to be with other people in a place that gives us comfort,” Chris said. “It’s good to come together and pray with people. It’s comforting to see our church is here and we can worship.”

“We’re grateful we are alive and have each other,” said Dawn. “We’re praying for our friends and our family and our own recovery.”

Msgr. Beckmann is a chaplain for the Long Beach Fire Department. When the island was evacuated, he remained in the rectory, he said, because “the fire department stays.”

“It was a scary time, especially watching cars float up and down Broadway, watching the water getting higher and higher before it stopped,” he told CNS.

“The support of the parishioners, the way they reached out to me, has been heartwarming.”

He described his most important tasks after Sandy: “One is to continue the sharing of the sacraments and preaching the Gospel in as normal a way as possible. … A couple of people said to me, ‘It’s nice to come back here and see things as normal as possible.’ To see the church functioning is important to them. … The second thing is to do whatever the church can do to help the wider Long Beach community.”

He said he was “praying a prayer of thanksgiving for all who have survived. I’m also asking the Holy Spirit to show us the proper way to move forward, our three parishes, the whole community and other religious institutions.”

The “three parishes” are St. Mary of the Isle and St. Ignatius Martyr in Long Beach and Our Lady of the Miraculous Medal, which is in the Point Lookout community on the island’s east end.

Msgr. Beckmann has been sleeping at St. Agnes Cathedral rectory in Rockville Centre, a six-mile drive, due north of Long Beach. He has been returning to his parish every day, driving a Toyota Camry hybrid, which comes in handy at a time when gas is scarce.

At St. Mary of the Isle Church, Bishop William F. Murphy of Rockville Centre addressed parishioners of St. Mary and St. Ignatius during Sunday Masses Nov. 4, celebrated in the parish auditorium next to the church, which was flooded. Tables with prepared meals, donated clothing and cleaning supplies were located near the folding chairs set up for Mass.

Bishop Murphy expressed his concern for the situation and pledged his support, the support of the diocese’s other parishes, and the support of Catholic Charities.

Rockville Centre Auxiliary Bishop Robert J. Brennan is the former pastor at St. Mary of the Isle and has made regular visits to the Island Park and Long Beach parishes.

“We have to address the spiritual and emotional needs of the people, give them hope,” he told CNS. “It’s important for the church to be here, to be with the people in their struggle. You have to be present. “We’ve had Mass every day (since the hurricane).”

He said he has been impressed by people’s gratitude “that they are alive. You lose things and that’s heartbreaking, but you still have your life.”

Episodes of looting and people cutting lines at the gas stations that have occurred are not surprising, he said.

“Events like this bring out the good and the bad. You see strangers saying, ‘I’ve got to help people in need.’ You see much more of that than the dark stuff.” 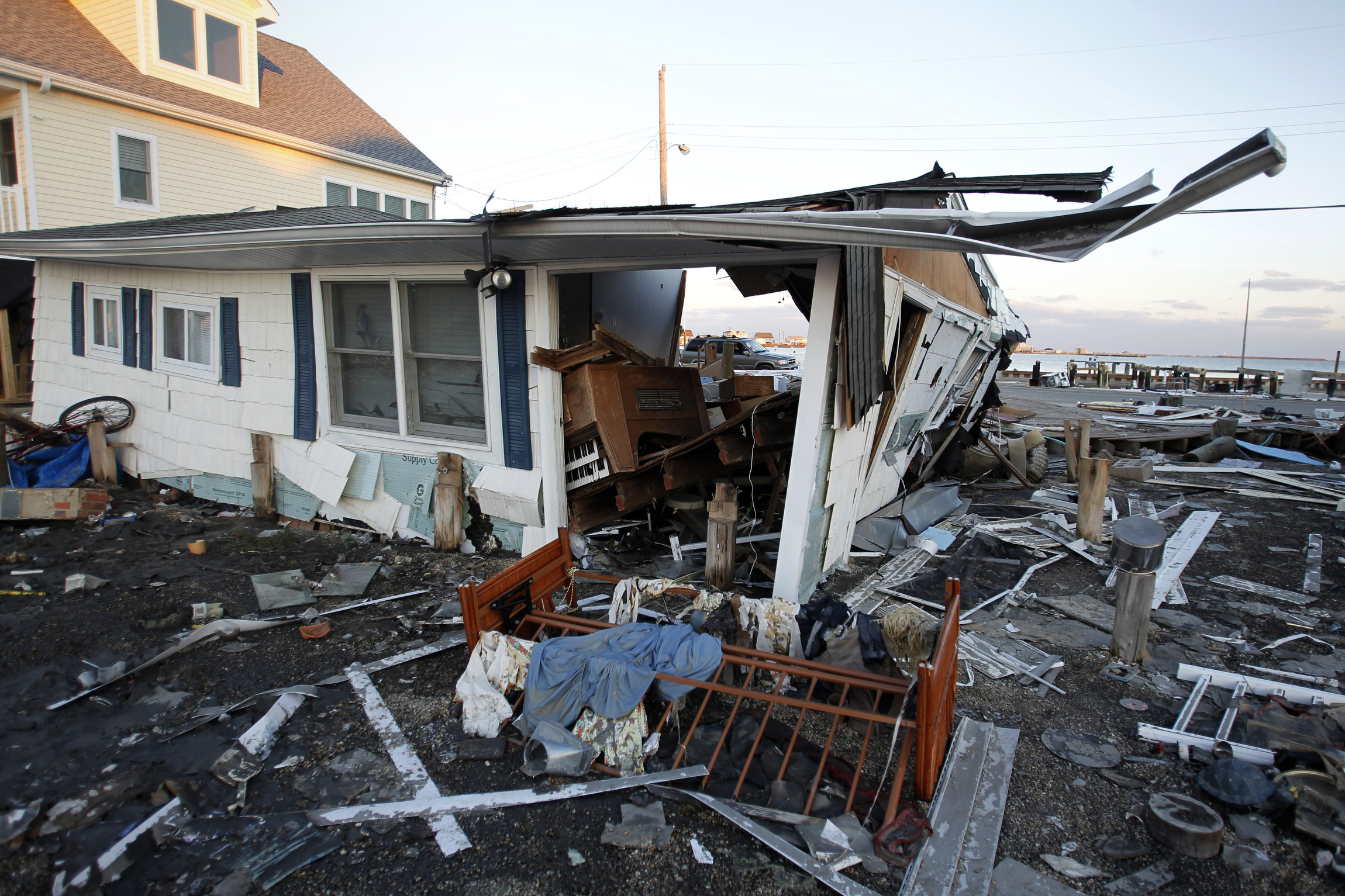