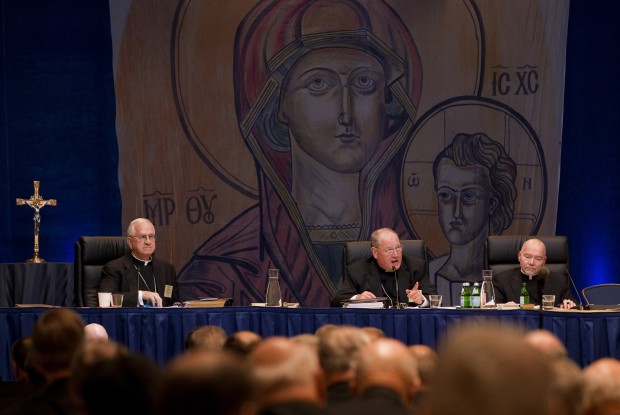 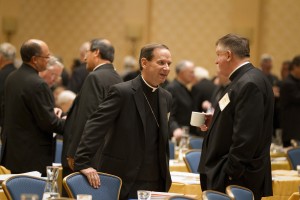 U.S. bishops, including Bishop Michael Burbidge of Raleigh and formerly of the Philadelphia Archdiocese, take a break from the proceeding of their annual fall meeting in Baltimore Nov. 12. (CNS photo/Nancy Phelan Wiechec)

BALTIMORE (CNS) — The U.S. bishops’ fall general assembly in Baltimore began with an emphasis on conversion and a return to the sacrament of penance.

New York Cardinal Timothy M. Dolan of New York, president of the U.S. bishops’ conference, told the bishops at the start of the Nov. 12-15 meeting that he could imagine the criticism he might get for emphasizing penance when there are plenty of “controversies and urgent matters for the church right now.”

But he stressed that the bishops cannot engage culture, dialogue with others or confront challenges unless they first recognize their own sins and experience the grace of repentance.

The cardinal also said the sacrament of penance was something the U.S. Conference of Catholic Bishops planned to stress for all Catholics year-round with reflections on re-embracing Friday as a day of penance, including the possible re-institution of abstinence on all Fridays.

Noting that there have been some clergy who “out of weaknesses have brought great pain to others,” Archbishop Vigano reminded the bishops. “We must continually undergo conversion ourselves … so people have faith and confidence in us.”

Bishop David L. Ricken of Green Bay, Wis., chair of the bishops’ Committee on Evangelization and Catechesis, presented a document that encouraged all Catholics to make a renewed effort to seek the sacrament of penance, also known as reconciliation.

If approved, the document will be published as a pamphlet in time to allow dioceses to prepare for Lent 2013.

The bishops’ assembly, which opened nearly a week after Election Day, also included discussions about religious liberty and marriage.

Archbishop William E. Lori of Baltimore, chairman of the U.S. bishops’ Ad Hoc Committee for Religious Liberty, said the work of defending religious liberty would continue despite “setbacks or challenges.”

“Defense of religious freedom requires not just dealing with short-term and mid-term goals, but indeed is a project that requires long-term foundational and formational work,” he added.

San Francisco Archbishop Salvatore J. Cordileone, chairman of the U.S. bishops’ Subcommittee for the Promotion and Defense of Marriage, said Election Day was “a disappointing day for marriage.” Voters in Maine, Maryland and Washington state approved same-sex marriage; Minnesota voters rejected a constitutional amendment to define marriage as being between one man and one woman.

He praised the work of the bishops in those four states to defend traditional marriage, noting that in all those states they were outspent by supporters of same-sex marriage.

Each measure passed by small margins, he said, a factor that pointed to the need to “redouble our efforts.”

A new statement on the economy, intended as a pastoral message of hope, received some sharp criticism as the document was formally introduced for consideration Nov. 12.

In floor discussion, some bishops said “The Hope of the Gospel in Difficult Economic Times” — which the bishops agreed in June should be drafted and fast-tracked to be ready for November — lacked connections to the bishops’ 1986 economics pastoral letter, gave what they felt was short shrift to church teaching on workers’ rights and inadequately addressing “the growing gap between the haves and have-nots” among other issues.

The document, written by a drafting committee under the direction of Archbishop Allen H. Vigneron of Detroit, was scheduled for a final vote of approval Nov. 13.

The bishops also heard a preliminary presentation of a document that highlights the need for better preaching in Sunday homilies.

“Preaching the Mystery of Faith: The Sunday Homily” encourages preachers to connect the Sunday homily with people’s daily lives. It was prepared by the Committee on Clergy, Consecrated Life and Vocations, chaired by Archbishop Robert J. Carlson of St. Louis.

Preaching needs to be done “more effectively in the context of the new evangelization,” Archbishop Carlson said. “Our people hunger for better preaching, preaching that would help them rediscover their faith.”

The bishops also discussed the proposed “scope of work” for revision of the Liturgy of the Hours submitted by the Committee on Divine Worship. The committee’s request comes as the International Commission on English in the Liturgy has started work on revising some parts of the liturgy, specifically hymns, some orations and some antiphons.

A statement drafted by the Doctrine Committee was withdrawn, after the committee asked permission to expand its scope. Titled “Contemporary Challenges and Opportunities for the Exercise of the Teaching Ministry of the Diocesan Bishop,” it calls upon bishops to take advantage of new technologies — including social media, blogging and cellphone technology — to respond when church teaching is portrayed inaccurately.

Auxiliary Bishop Edgar M. da Cunha of Newark, N.J., a member of the USCCB Committee on Family, Marriage, Laity and Youth, gave an update on World Youth Day next July in Rio de Janeiro. He said about 12,000 U.S. pilgrims are expected for the international event, but organizers are preparing for a turnout of 1 million registrations, plus 2.5 million at its closing Mass.

Bishop da Cunha, a Brazilian native, also addressed safety concerns, pointing out that Rio de Janeiro’s reputation “is less than the reality.” He said organizers have gone to great lengths to address the issue. They have seen a notable police presence and felt safe there, he added.

The day before the start of the bishops’ fall assembly, officials of the Leadership Conference of Women Religious met with three U.S. bishops charged with overseeing the organization’s reform.

“The discussion was open and cordial and those present agreed to meet again to continue the conversation,” according to a brief statement issued Nov. 12 by Franciscan Sister Florence Deacon, LCWR president, and Seattle Archbishop J. Peter Sartain, who was assigned by the Vatican to provide “review, guidance and approval, where necessary, of the work” of LCWR, an umbrella group of 1,500 leaders of U.S. women’s religious communities representing about 80 percent of the country’s 57,000 women religious.

In April, the Vatican Congregation for the Doctrine of the Faith issued an assessment of LCWR and called for its reform to ensure its fidelity to Catholic teaching.

In another session Nov. 11, a group of U.S. bishops and Catholic bloggers discussed — and tweeted about — how to use social media to spread the Gospel message.

In elections Nov. 12, Bishop Kevin J. Farrell of Dallas was chosen as treasurer-elect by the U.S. bishops on the first day of the bishops’ assembly. The bishops chose chairmen-elect for several committees: Bishop Michael F. Burbidge of Raleigh, N.C., for Clergy, Consecrated Life and Vocations; Cardinal Daniel N. DiNardo of Galveston-Houston, for Divine Worship; Archbishop Thomas G. Wenski of Miami, for Domestic Justice and Human Development; Bishop Richard J. Malone of Buffalo, N.Y. (and currently administrator of the Diocese of Portland, Maine), for Laity, Marriage, Family Life and Youth; and Auxiliary Bishop Eusebio Elizondo of Seattle, for Migration.

The bishops also elected members of the board of Catholic Relief Services.

Contributing to this report were Mark Pattison, Patricia Zapor and Dennis Sadowski in Baltimore and Carol Zimmermann in Washington.